Poisonous planet, girl with no emotions

I am trying to find a book I read a long time ago. This girl was raised with no emotions and trained to explore this new planet. The planet was poisonous to humans. She was sent to it with a doctor and right before she left a girl preparing her for the voyage removed the chip that depressed her emotions. She felt badly the girl would never feel any emotions. Then this girl ends up on a killer planet to explore for human inhabitation and falls in love with the doctor. It's been 13 years and I did enjoy this book so would like to find it again. I swear it was biosphere or something...

Might it be The Dosadi Experiment? There's sort of a sphere on the cover. 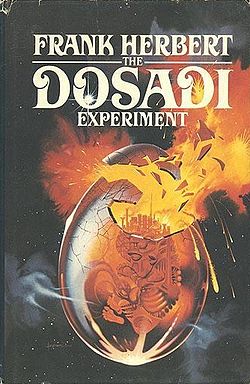 Generations ago, a secret, unauthorized experiment by the Gowachins was carried out with the help of a contract with the Calebans. They isolated the planet Dosadi behind an impenetrable barrier called "The God Wall". On the planet were placed humans and Gowachin, with an odd mix of modern and old technology. The planet itself is massively poisonous except for a narrow valley, containing the city "Chu", into which nearly 89 million humans and Gowachin are crowded under terrible conditions. It is ruled by a dictator, many other forms of government having been tried previously, but without the ability to remove such things as the DemoPol, a computer system used to manipulate populaces without their consent or knowledge. The culture of ordinary day-to-day power in Dosadi is very violent. Among other tools, addictive psychotropes are used for handling power among hierarchies in organisations.

Keila Jedrak, a female character, does control her emotions, although they are definitely still present. From the book's text:

But she did not really consider herself an angel or her weapon a sword. Her real weapon was an intellect hardened and sharpened by the terrible decisions her planet required. Emotions were a force to be diverted within the self or to be used against anyone who had failed to learn what Dosadi taught. She knew her own weakness and hid it carefully: she'd been taught by loving parents (who'd concealed their love behind exquisite cruelty) that Dosadi's decisions were indeed terrible.

Her companion, Jorj X. McKie, is the leading "saboteur extraordinary" in the Bureau of Sabotage, and is never labeled as a doctor.

I think it could be Bios, by Robert Charles Wilson. From this review:

For the humans investigating Isis, a lungful of air, the briefest of touches, an encounter with a single example from the vast array of native micro-organisms, would be fatal, inducing within a matter of hours intense haemorrhagic illness and a painful and gruesome death. With scientists' dark humour, the researchers call two of their outposts on the planetary surface, Yambuku and Marburg, after the first two strains of haemorrhagic fever that went on to devastate 21st Century Earth.

Zoe Fisher, cloned by one of the Trusts, abandoned in an Iranian orphanage only to be rescued again, is more adapted than any human to survive in the wilds of Isis. Where others need bulky bioarmoured suits for any excursion, Zoe can leave the secure dome in only a membranous body-suit - both suit and genetically-modified Zoe are among the novel technologies being tested on Isis.

Bios presents an enthralling tale of planetary investigation, scientific endeavour at the mercy of both the political machinations of the power-plays back in the Solar System, as Family-led Trusts vie for power, and individual whim. For, right at the start, we witness a surgeon making a final rebellious gesture against the establishment before she retires: during a routine surgical tweak to Zoe's configuration, she removes a vital augmentation, a gland that controls extremes of mood and emotion. The effects will be slow to kick in, but they will mean that Zoe will learn to fear and care and, even, to love, when she arrives on Isis.

16
Identifying a sci-fi novel about exploring a vibrant planet, and all life being interconnected

10
Book where teen wakes up to find he's alone in a major city; turns out he's part of a strange psychological experiment on another planet
17
Book with all-girl orphanage
4
Early 2000s science fiction book with a cyborg girl and Jupiter dirigibles
8
Book centered on beautiful blonde (nymph?) with green eyes
3
Young adult novel about a girl with a robot housekeeper on an Alien Planet
44
Short story about a teenager who has his brain replaced with a microchip (Psychological Horror)
5
Book about girl who was killed, and then cloned without memories of her past life. She lives in a facility with other clones of dead people
8
Short Story about Teenagers with Computer Chips Implanted in Their Brains