This might be a bit more complicated, because the comic I'm looking for is not well known, I think it was 4-5 issues, might have been from the late 80s, mid-90s, not sure about the publisher. Probably independent. I read it once a years ago but can't remember the name and my googling isn't turning anything up either.

As noted above, this is currently showing up as "unanswered".

"Shadow Empires: Faith Conquers", published in 1994, first part of the Iron Empires series, by Christopher Moeller was identified by the querent as the correct comic. 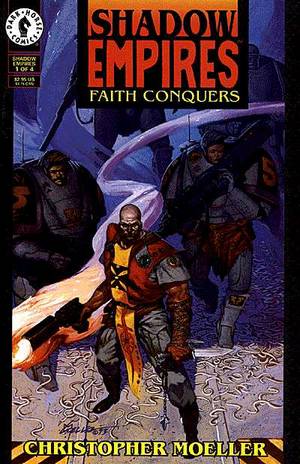 In the far future, humanity is in decline, the soul-possessing Vaylen are advancing, and man's only hope is Faith...

On the distant outpost planet of Hotok, warrior-priest Faith and his elite troop, the Grey Rats, fight a desperate two-front war -- the alien Vaylen invading from the stars, and the decay and corruption they find in Hotok society itself. Shadow Empires is a beautifully painted science fiction epic in the tradition of Robert A. Heinlein!

It involves a warrior priest, it came out in four issues, and it is a space opera.

Not the answer you're looking for? Browse other questions tagged story-identification comics space-opera or ask your own question.