Webcomic starring a pair of cats who move into a haunted mansion - R.O.B. the robot and spirits

So I know that I read this webcomic about two years ago. The two main characters are two anthropomorphic cats. I don't think they're directly related, or romantically attached. There are a lot of videogame references, including that the mansion they're living in has a spirit of death who likes to play video-games (only one of the two cats can see him) who is occasionally held at bay by R.O.B. the Robot with a Zapper in his hands. At least one of the cats was something like a Siamese or one of the Egyptian breeds with a small head and comparatively large ears. I think they were an orange color.

I think that it's within the last few years that the webcomic was released, although most of the references were to old NES games.

It is not VG Cats, Housepets!, or theGaMERCat just to rule out a few that I ran into while browsing around. The cats are full anthro, standing upright and using hands. I don't remember if humans exist at all, but I'm pretty sure that there were other upright animals. I want to say that one of them renamed the house (which they'd inherited) as "Hyrule Mansion" or something similar.

story-identification webcomics
Share
Improve this question
edited May 19 '16 at 19:23

I'm an idiot. Savestate. I was fixated on the idea of them being cats, so I just kind of stepped right past it, because it's about a pair of dogs. And they renamed "Family Estate" to "Sav Estate" with a TriForce above it. 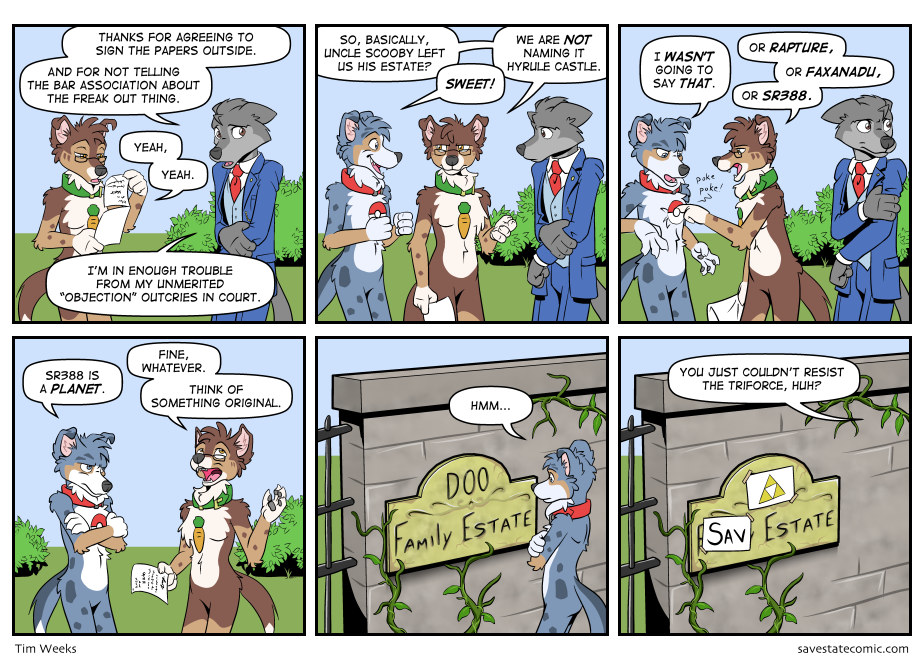 R.O.B. holding the spirit at bay

13
YA series about magical cats which have some kind of ability that involved seeing strings
29
Story about aliens playing God, deciding they are overwhelmed, and leaving
10
Webcomic with roses and spirits
10
Looking for a short scary story book! A girl (Chloe) is turned into a cat and stoned?
5
Webcomic about a boy visited by a young demon who emerges from under his bed and loves cookies
9
Webcomic about a robot girl able to use magic who moves to the city to go to school
6
Book Identification - Children's sci-fi book about videogame aliens
10
Comic or Webcomic with a robot enthusiastically proclaiming “Krill the humans!”