How was Bard so accurate with his shot that killed Smaug?

Watching 'The Hobbit: The Battle of the Five Armies', I saw some grade-A marksmanship from Bard, using one of the dragon-killing black arrows to hit Smaug in precisely the spot where ONE of his scales is gone.

On top of that, the ballista tower was damaged and he can't even use the ballista anymore, prompting him to use his son as a makeshift ballista.

Is there any evidence of how Bard became a good marksman?

(I understand that the movie adaptation of the book is different, but my question is how did Bard become that skilled) 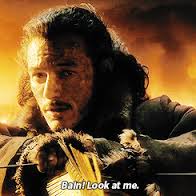 TL;DR: We don't know for sure, but there are hints that the arrow was magical.

Throughout Tolkien's works, there is much talk of magic, but in most cases, we are left to decide for ourselves whether magic was actually used in a given situation. That is true here.

The archers of Dale fired countless arrows at the dragon, but to no avail:

Roaring [Smaug] swept back over the town. A hail of dark arrows leaped up and snapped and rattled on his scales and jewels, and their shafts fell back kindled by his breath burning and hissing into the lake. No fireworks you ever imagined equalled the sights that night. At the twanging of the bows and the shrilling of the trumpets the dragon's wrath blazed to its height, till he was blind and mad with it. No one had dared to give battle to him for many an age; nor would they have dared now, if it had not been for the grim-voiced man (Bard was his name), who ran to and fro cheering on the archers and urging the Master to order them to fight to the last arrow...

Soon all the town would be deserted and burned down to the surface of the lake. That was the dragon's hope. They could all get into boats for all he cared. There he could have fine sport hunting them, or they could stop till they starved. Let them try to get to land and he would be ready. Soon he would set all the shoreland woods ablaze and wither every field and pasture. Just now he was enjoying the sport of town-baiting more than he had enjoyed anything for years. But there was still a company of archers that held their ground among the burning houses.

Bard himself - a great man descended from nobility - uses all but one of his arrows. This last arrow is special, said to have been made by the dwarves under the mountain where Smaug now lives. A bird - the same species that helped Bilbo's group find the door into the mountain - comes to Bard and tells him where to aim his last arrow:

Their captain was Bard, grim-voiced and grim-faced, whose friends had accused him of prophesying floods and poisoned fish, though they knew his worth and courage. He was a descendant in long line of Girion, Lord of Dale, whose wife and child had escaped down the Running River from the ruin long ago. Now he shot with a great yew bow, till all his arrows but one were spent. The flames were near him. His companions were leaving him. He bent his bow for the last time. Suddenly out of the dark something fluttered to his shoulder. He started-but it was only an old thrush. Unafraid it perched by his ear and it brought him news. Marvelling he found he could understand its tongue, for he was of the race of Dale.

"Wait! Wait!" it said to him. "The moon is rising. Look for the hollow of the left breast as he flies and turns above you!" And while Bard paused in wonder it told him of tidings up in the Mountain and of all that it had heard.

Then Bard drew his bow-string to his ear. The dragon was circling back, flying low, and as he came the moon rose above the eastern shore and silvered his great wings. "Arrow!" said the bowman. "Black arrow! I have saved you to the last. You have never failed me and always I have recovered you. I had you from my father and he from of old. If ever you came from the forges of the true king under the Mountain, go now and speed Well!"

The dragon swooped once more lower than ever, and as he turned and dived down his belly glittered white with sparkling fires of gems in the moon-but not in one place. The great bow twanged. The black arrow sped straight from the string, straight for the hollow by the left breast where the foreleg was flung wide. In it smote and vanished, barb, shaft and feather, so fierce was its flight. With a shriek that deafened men, felled trees and split stone, Smaug shot spouting into the air, turned over and crashed down from on high in ruin.

Later, Roäc, son of Carc, and lord of the Ravens, flies to the dwarves to tell them that Smaug was dead; he is familiar with the thrush who advised Bard, which suggests that the thrush was more than just a well-informed talking bird:

"I am Roäc son of Carc. Carc is dead, but he was well known to you once. It is a hundred years and three and fifty since I came out of the egg, but I do not forget what my father told me. Now I am the chief of the great ravens of the Mountain. We are few, but we remember still the king that was of old. Most of my people are abroad, for there are great tidings in the South - some are tidings of joy to you, and some you will not think so good. "Behold! the birds are gathering back again to the Mountain and to Dale from South and East and West, for word has gone out that Smaug is dead!"

"Dead! Dead?" shouted the dwarves. "Dead! Then we have been in needless fear-and the treasure is ours!"

They all sprang up and began to caper about for joy.

"Yes, dead," said Roäc. "The thrush, may his feathers never fall, saw him die, and we may trust his words. He saw him fall in battle with the men of Esgaroth the third night back from now at the rising of the moon."

Not the answer you're looking for? Browse other questions tagged the-lord-of-the-rings movie tolkiens-legendarium the-hobbit or ask your own question.

13
Has Tolkien's estate ever sold the rights to adaptations of any Tolkien works?
8
Are there any plans to novelize the Hobbit movies?

115
Why was Gandalf involved with the Dwarves' quest to rob Smaug?
54
How does Galadriel know that Gandalf 'survives' his encounter with the Balrog?
6
Why was the Thrush in league with Bard the Bowman of Laketown?
10
How much gold did Smaug possess in his hoard?
16
How is Smaug aware that there is a war coming when all he did was lie in all the dwarves gold at Erebor?
30
How did Smaug transport all of his gold and jewels?
1
How was Anarion killed?
13
Who came up with the Dwarven Windlance?
2
Was Sauron aware of the prophecy that Smaug would be killed and that the Dwarves would reclaim Erebor?
5
Why was Smaug able to take over Erebor with such ease?