How was the full address for Atlantis discovered?

At the very beginning of the first episode of Stargate Atlantis, Daniel Jackson explains to Doctors Weir and McKay that the address for the Lost City was incomplete, and then proceeds to draw another symbol on his whiteboard to create an eight symbol address. This eighth symbol, as explained here, adds an extra distance element to the stargate address equation.

My question is, where did this missing symbol come from? Is it explained anywhere, apart from Daniel saying that the address was incomplete and that"we have recently discovered" another symbol? Are we just meant to accept this fact as the setting-up point for the new show?

It seems to represent a galaxy code

SIMMONS: Wormhole is tracking… (freaked out, then to Carter) Captain?

CARTER: Sir, the computer indicates that the wormhole is leaving our known network of Stargates. It's going outside of our galaxy. Far out. [O'Neill continues to gaze out at the Stargate.]

DANIEL: That's why the Gate needed all the extra power.

HAMMOND: Hold on, I thought Stargate addresses were six points in space with the seventh being the point of origin.

CARTER The extra chevron must add a new distance calculation to the existing points. It's kind of like dialing a different area code.

The same sort of thing might be at play here. From Stargate: Atlantis, S01E01:

WEIR: The point of origin, Earth.

JACKSON: That's not it.

McKAY: Then your address must be incorrect.

(He draws another symbol in between the sixth symbol and the Earth symbol.)

WEIR: What are you saying, Doctor Jackson?

(Daniel numbers the newest symbol 7 and the Earth symbol 8.)

JACKSON: It's an eight symbol address. What we're looking for may be further away than we ever imagined, but it's not out of reach.

How was this code determined?

I don't think there's any canon evidence, but we can probably rule out two possibilities.

All in-galaxy addresses are 6 symbols followed by a point of origin symbol. So if you find a 7 symbol address it can only mean 3 things.

Instead of swapping the 7th symbol with the Tau'ri POO Daniel tacks it on as the 8th symbol. 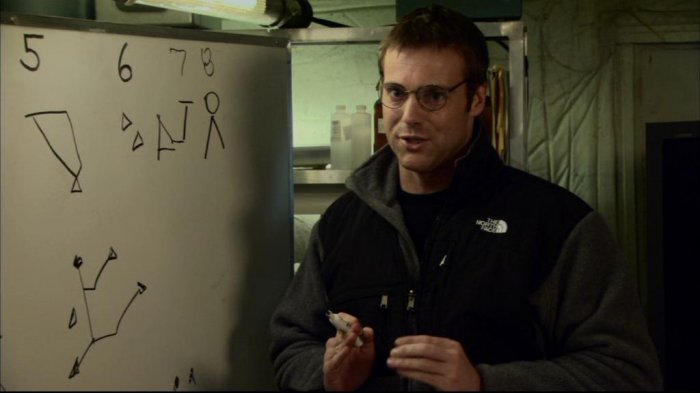 16
When does the 'Lost City' become Atlantis in Stargate
6
What exactly do the eighth and ninth symbols in a stargate address represent?

13
Why Would the Wall on Abydos Have Coordinates Instead of Stargate IDs?
6
How did the first off-world team know the return address for Atlantis?
5
Does the crew conduct any actual exploration of Atlantis?
5
How could they use the Atlantis Stargate when it was destroyed in an earlier episode?
8
Where Did the Atlantis Gate Address Come From?
9
How many people were in the Atlantis Expedition and lived on Atlantis?
4
What are the windows in Atlantis made out of?
8
Were there any Russians in the Atlantis expedition?