What happened to Obi Wan's lightsaber after the duel between Obi-Wan and Darth Vader on the Death Star?

What happened to Obi-Wan Kenobi's lightsaber after Obi-Wan and Darth Vader dueled on the Death Star? Vader seemed to have possession of it the last time we saw it -- what did he do with it? Did it survive

the destruction of the Death Star?

Note: the idea for this question came from http://www.moviemistakes.com/film1226/questions/entry56487

I don't think there is an answer in canon. Obi-Wan's lightsaber was left when Vader killed him. It may have been destroyed in the explosion of the Death Star, or Vader or someone else may have taken it (as in Legends), but its canon status after A New Hope is unknown.

However, there is a Legends answer.

In Legends, Vader did indeed keep Obi-Wan's saber as a trophy.

It surprised him that Darth Vader would want to keep the lightsaber of his former teacher, but it wasn’t impossible. Vader could have sent it away from the Death Star just after he defeated Kenobi. Or he might even have taken it with him when he escaped the destruction of the Death Star.

“It’s good to have you back, Artoo,” Luke said. “From all the excitement, I take it you found the lightsaber.”

“And more,” Tionne answered, holding out the Holocron for him to see. “Master Ikrit has the lightsaber with him.”

A minor character named Orloc tries to steal it later on, but is ultimately unsuccessful:

"You would have killed my friends—and maybe even me—just to keep the Holocron and Obi-Wan Kenobi's lightsaber. You thought they could give you true power, just like I believed you could give me real power. The power of the Force is real. But you knew you never had it. I was the fool."

Obi-Wan Kenobi's lightsaber was the third lightsaber that was constructed and wielded by Jedi Master Obi-Wan Kenobi during the Clone Wars after he lost second one prior to the Battle of Geonosis. - source

That's about all we know about it at this point, Lucasfilm (Disney) has yet to expand on the lightsaber's final fate, so it is unknown in canon at this point. It was last seen on the floor of the first Death Star with Kenobi's Jedi robes. 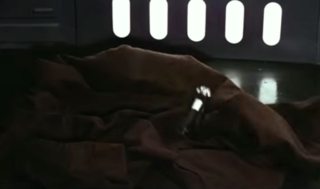 It seems there was sufficient time for Vader to take the lightsaber and keep it on his person under his cape. When the Death Star exploded he would have returned to Mustafar to bring his trophy back to where that very lightsaber was used to take his limbs.

I personally think that Vader would have kept the lightsaber and robes as a reminder that the light always succumbs to the dark. If I were him, I would have kept it at a private base or room. Whether it will be discovered, however. . .

18
Where are Obi-Wan Kenobi's and Qui-gon Jinn's Lightsabers?
1
How did Luke get his lightsaber back after A New Hope?
-8
Where is Obi-Wan's lightsaber?