a containment room where a single prisoner is strapped down in a chair and brainwashed.

a containment device where a single prisoner, Bucky, is strapped down in a chair and brainwashed.

To me, these seem a little too similar to be a total coincidence. Has anyone associated with Civil War mentioned if this was an intentional reference?

No, it was possibly a reference to the D23 (Disney) fan club.

The container name was Deck 23 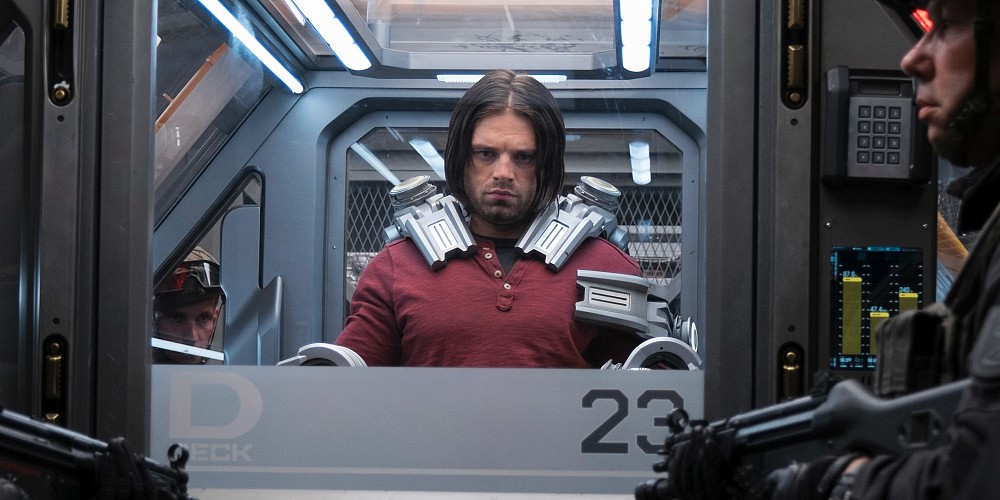 But as you can see from the image D was highlighted to make it D23.The LOST room number reference seems completely coincidental. Even screenrant speculated the same ( Refer Easter egg no 17).

Marvel’s Captain America: Civil War is shaping up to be one of the biggest films of the summer, bringing together Captain America and Iron Man in a battle of wills—and fists! But D23 fans watching the film will get a special treat—an exclusive D23 Easter Egg! Kevin Feige, producer and president, Marvel Studios, is a Disney super-fan, not to mention a big fan of D23. He showed his love during the Captain America: Civil War sneak peek at D23 Expo last year by pointing out a special “Easter egg” in the film: During a scene where Sebastian Stan’s character, Bucky Barnes, aka The Winter Soldier, is being interrogated, the letter “D” and the numbers “23” are prominently displayed on the metallic doors to the room where Bucky is being held. So we asked Feige, is that something that’s actually in the film, or was it created just for D23 Expo? “That’s in the movie, baby!” exclaims Feige, saying it was a deliberate shout-out to D23 fans. “That’s exactly what it was,” he says. “That’s why we showed it to them.” Be on the lookout for this cool D23 Easter Egg when Captain America: Civil War opens on May 6.

Not the answer you're looking for? Browse other questions tagged marvel-cinematic-universe captain-america marvel captain-america-civil-war lost or ask your own question.