Books about people turning into dragons

I'm looking for a series of books with people turning into dragons. All I know about it is there is a bit of political intrigue, something about a royal family where one prince is supposed to be king but doesn't have the ability to transform and his brother does which puts him in position to take over the throne. I guess those with the ability are the aristocrats or nobles.

story-identification dragons
share | improve this question | |
edited May 8 '16 at 1:41

You might look at "Dragon Bones" and its sequel "Dragon's Blood" by Patricia Briggs. It is not a perfect fit, but there are some similarities. There is political intrigue, where one character was supposed to inherit, but was going to be passed over with inheritance eventually supposed to go to his missing brother (while his uncle holds it in trust). The noble line they are part of (Called 'Hurog') is said to have been descended from dragons.

There is one character who can transform into a dragon, which plays into several instances of political intrigue

He was born before the ability to transform was lost, and was bound to the family by magic. He proves the dragon ancestry of the Hurog line, and later transforms to gain support for his lord since the association with dragons was what gave the Hurog line the right to rule in the first place.

in the second book, it is revealed that an artifact of mass destruction, fallen into the wrong hands, was created by a character because he was jealous he didn't have enough dragon ancestry to transform

As I said, it's not a perfect match - the dragon transformation is not the deciding factor of inheritance, and the rivalry between transforming and non-transforming matters because of the artifact, not the title. However, the separate elements are there, so it might be worth looking into.

The book is titled Blood of Requiem, first book of the Song of Dragons series by Daniel Arenson. 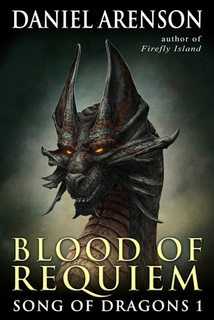 Long ago stood the kingdom of Requiem, a land of men who could grow wings and scales, breathe fire, and take flight as dragons. Requiem ruled the sky.

But Dies Irae, a tyrant leading an army of griffins, hunted Requiem's people, burned their forests, and shattered their temples. Requiem fell. This ancient land now lies in ruin, its halls crumbled, its cries silenced, its skeletons littering the burned earth.

In the wilderness, a scattering of survivors lives in hiding. The griffins still hunt them, and every day promises death. Will Requiem's last children perish in exile... or once more become dragons and fly to war?

1
The earliest story example of a software engineering workplace immersed into Virtual or Augmented Reality?

17
Book about Dragons Ending (Turning to stone)
5
Fantasy book - Evil Prince forces a Mage to use Black Magic; Mage is slowly dying from it Book cover background of a castle
19
Film about dystopian royalty in an alternate universe
3
How did Daemon Targaryen control both Caraxes and Vhagar?
6
Identify fantasy story with magical boy, girl who marries a prince who is assassinated
31
A series about the Seventh son of a seventh son and a bullet that will always find its mark
7
Books about all adults turning into zombies
19
Spy from Earth studies Galactic Empire nobility and prevents plot to depose Emperor
7
Dragon shifter novels