Why does zemo wear a mask?

I am really curious what is with zemo and his purple face mask, did he always have it and why does he wear it? Is this just a part of the character, or was he injured in some horrible accident like doctor doom? Why does he hide his face?

This is deep into comic book schlock origins now.

So Baron Zemo was a Nazi Scientist. Cap came along and fought him repeatedly, because Zemo was the guy who built things like combat robots, laser death rays and so on. And because Zemo is evil and does evil things sometimes for not other reason than to be evil, he once tested a death ray on a nearby German town, killing every inhabitant. He thought he could frame the allies for the misdeed, but that didn't work out. Zemo had to go into hiding.

So in order to remain anonymous, he put on the purple/red mask. He kept on inventing death lasers and robots for the Nazis, though.

So Captain America comes along and the battle begins. This throws a wrench in Zemo's plans to unveil his latest and greatest invention ever: Adhesive X. It's the strongest glue ever invented. It can't be removed. At all. During WWII, this was the ultra-glue! After the war, the glue-based villain Paste Pot Pete found a way to dissolve it.

Fight time! Cap throws his shield and the vat of Adhesive X spills over Zemo's face! The hood gets fused to his face permanently. He can never remove it.

He could see, breathe and hear okay with his mask over his face, but he couldn't eat. So he had to be fed with IVs. It drove the already mad scientist even madder. Cap had an enemy for life! 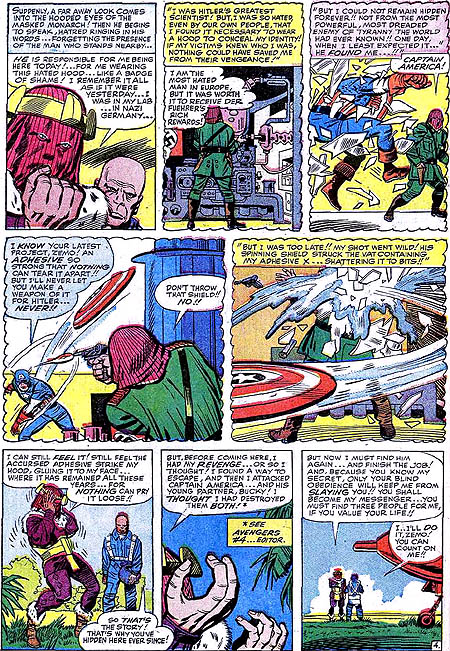 8
Why does Steve Rogers wear a different uniform to everyone else in SHIELD?
13
Why does The Punisher not disguise himself?
22
Why does Groot want money?
21
Why does Zemo want to know what happened in December 1991?
7
Why did Bucky Barnes ask "What did I do?"
6
Why did this character appear this way in WandaVision?