Out-of-universe, why was the Fifth Doctor given a piece of celery to wear?

For those of you unfamiliar with this minor celebrity vegetable, here's a picture of it: 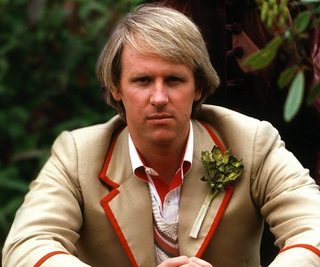 As far as I know, the Fifth Doctor wore it for his entire run, but we didn't get anything resembling an in-universe explanation for it until his very last episode, The Caves of Androzani.

PERI: Doctor, why do you wear a stick of celery in your lapel?
DOCTOR: Does it offend you?
PERI: No, I'm just curious.
DOCTOR: Safety precaution. I'm allergic to certain gases in the praxis range of the spectrum.
PERI: How does the celery help?
DOCTOR: If the gas is present, the celery turns purple.
PERI: And then what do you do?
DOCTOR: I eat the celery. If nothing else, I'm sure it's good for my teeth.

Sadly, the celery never did turn purple, so we never found out if it was legitimately useful.

But considering it was around for a very long time before the writers felt the need to acknowledge it, its presence probably has more to do with making the costume look ever-so-slightly abnormal rather than any in-universe benefits. Which begs the question: Is there any particular reason they chose celery as the random weird thing to put on Peter Davison's costume?

Unknown, but maybe because it was unusual

As indicated in the comment by Richard, the celery idea was due to the producer, John Nathan-Turner, who did not offer an explanation for it.

The celery was John’s idea. He just came to me one day and said ‘I think the new Doctor should wear a stick of celery on his lapel’, and so that was it. Funny, really, because I don’t much like celery and I usually ended up getting presented with tons of the stuff at conventions! It was nice that it was actually explained before I left the series."

Davison later expanded upon this:

At the first costume fitting, [Producer] John Nathan-Turner said I should have something odd and unique on the lapel. And he came to me a couple weeks later and said, ‘stick a celery on your lapel.’ I said okay, as long as you explain it. And we preceded to do three seasons and I said, you still haven’t explained the celery. So they wrote this bit for my last story ‘The Caves of Androzani’ that explained it as an antidote to a poison... which it also detected.

So it would seems that the main reason for choosing the celery was that it was unusual.

Note that this shows that the in-universe justifications are clearly not Nathan-Turner's original reason, since Davison had to push for any such explanation to be given.

He also gave a facetious explanation at one point, although his later comments (and the fact that Davison disliked celery) suggest that this was not intended to be taken as true:

“In case I get peckish!” said Peter Davison. We were in the Tardis. Not the real one I grant you, but a mock-up at the Longleat Doctor Who Exhibition way back in 1982. The snotty-nosed eleven year old incarnation of myself had just asked his beloved fifth Doctor why he always wore a stick of celery on his lapel, while he scribbled his signature on my Doctor Who Annual. It was an entirely valid question of course and the Doctor had given me a completely honest answer. Or so I thought.

As suggested by the Tardis Data Core, it is possible (though perhaps not likely) that Nathan-Turner was inspired by The Avengers (the 1960s spy series, not the superhero movie), where the notion of a character wearing celery had previously been mentioned.

Not the answer you're looking for? Browse other questions tagged doctor-who food costume or ask your own question.

7
Why was the Doctor angry in Journey's End?
5
In how many episodes did the Doctor wear a fez?
4
Fifth Season Finale- How can the Universe still exist?
13
Why didn't The Doctor regenerate just before he rebooted the universe?
9
Why was meta-crisis Doctor dangerous?
9
Out of universe, why did they decide to have the Third Doctor be stranded on Earth for so long?
5
How much could the Fifth Doctor remember from Time Crash?
8
Did the Fifth Doctor ever save the universe using a kettle and some string?
8
How was the universe created according to The Doctor?
1
Why wasn't the Meta-Crisis Doctor as smart as Doctor Donna was?