Is the Death Star more advanced than Starkiller Base?

If my understanding is correct, the Death Star ("version 1") was a spherical device in between the size of a giant asteroid and small planet, whose function was to create a beam of energy capable of destroying an entire planet. This function was successfully executed.

Starkiller Base was also a spherical weapon whose function was to create a beam of energy capable of destroying an entire planet.

In the most recent Star Wars film they displayed the scaled projections of the 2 weapons to emphasize the greater size of the Starkiller Base. It looked like the latter might've been 50 - 100x larger.

If Starkiller Base did the same thing as the Death Star but was so much larger, doesn't that imply a reversal of technological progress and scientific knowledge in the Empire / First Order since the days of the Death Star? I mean, the output is the same but the amount of resources being consumed seems analogous to a smartphone versus a multi-room 1950's mainframe.

Also, it seems like the Death Star has a major advantage in that it's reusable.

Starkiller Base is more advanced

It can destroy multiple planets simultaneously

Notice how the beam splits to destroy the entire Hosnian system.

From the script for The Force Awakens:

At a massive distance we see PLANETS- THE REPUBLIC CAPITAL SYSTEM -- INCREASINGLY LIT, THEN POWERFULLY HIT BY THE VAST FIREBLAST WHICH OBLITERATES IT ALL!

Poe confirms that the Starkiller Base destroyed the entire system:

POE: Finn's familiar with the weapon that destroyed the Hosnian system. He worked on the base.

The Death Star had a single superlaser, and as such would be hard-pressed to destroy multiple planets in a single shot—after which, of course, it had a significant recharge time of 24 hours (according to Star Wars: Everything You Need to Know).

Starkiller Base can hit targets at greater range.

"It fires through a hole in the continuum that it makes itself. Everybody was calling it 'sub'-hyperspace."

Assuming that the rotation and inclination of the planet had been taken into account, the released blast of concentrated phantom energy would travel along a perfectly linear path, punching a small Big Rip through hyperspace itself until it left the galaxy— —or encountered something in its path that was of sufficient mass to intercept it.

Finn nodded. “General Hux told us it’s the most powerful weapon ever built. He said that it can reach halfway across the galaxy.” Fresh murmurs of disbelief greeted this latest assertion. “And in real time. Because it doesn’t reach across the galaxy; it reaches through it.” He shook his head, which was starting to hurt from the effort of trying to explain what he had overheard but did not understand.

Note that Finn's audience reacts to the revelation of the weapon's range with disbelief. This certainly seems to imply that the range is greater than anyone had believed possible, which must have included the range of the Death Star.

In addition, this last quote shows that Starkiller is instantaneous

The Death Star's weapon, as a laser traveling through real space, would travel at the speed of light. The Star Wars galaxy is over 100,000 light years wide.

Leia knew perfectly well that the Rebellion wasn’t coming to Corva sector anytime soon, not with the fate of the galaxy to be decided nearly a hundred thousand light-years away. The people of Sesid were alone—just as the people of Basteel were.

Even if it could reach halfway across the galaxy, it would take 50,000 years to reach its target—more than enough time for ships with hyperdrives to evacuate the entire planet.

Planetary shields may have also improved.

It is also quite possible that planetary shields have gotten stronger since the era of A New Hope, forcing the development of larger superweapons to penetrate them. Thus, even if the Starkiller base might not have been necessary to destroy Alderaan in the past, it would be necessary to destroy the Hosnian capital as of The Force Awakens

And lest you think that the Death Star is superior, because it can actually move around...

Like the Death Star, the Starkiller Base is mobile 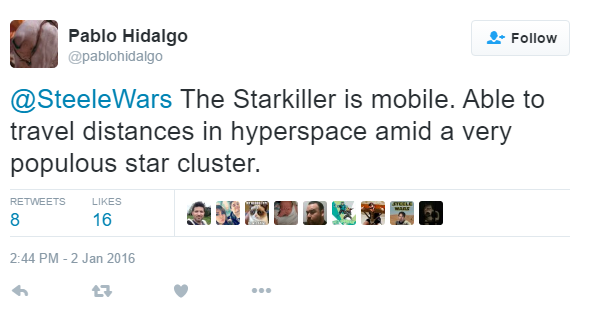 The output isn't the same.

The DS-1 is a moon-sized mobile battle station capable of destroying a planet. It fires a singular charged plasma beam through real space into the target planet's core, overloading it and triggering a chain reaction resulting in the planet's explosive disintegration from within. Its superlaser draws power from its own reactors and has a 24h cooldown.

The DS-2 (for completion's sake) is several times larger, but is capable of adjusting its power level (thus being more power-efficient in shooting at starships without going overkill with full power), has a much shorter cooldown (enough to repeatedly fire in one battle at Endor) and none of the DS-1's weaknesses that led to its destruction.

Starkiller Base is built into an existing planet (they didn't build the planet) capable of destroying multiple targets with one firing sequence. It charges its weapon by leeching solar power from the nearest star, storing the enormous amounts of power using dark energy, and can then fire it at multiple targets through the newly discovered sub-hyperspace, which - I believe - allows objects to travel visibly through real space at faster-than-light speeds (don't question me on the physics I didn't invent it). The effect is that the shots scorches the entire surface of whatever it hits without destroying the planet. There's nothing to suggest it can't fire again for a long time if there's enough power left from the nearby star.

You can observe technological advancements in various aspects, but possibly not in others. A few things to note:

It needs to be considered that while the Death Stars were physically smaller, they were completely manufactured from scratch.

Starkiller Base, on the other hand, was not. Instead, it was built into an existing planet.

From the Star Wars databank:

Deep in the Unknown Regions, the First Order has constructed a superweapon that uses an entire planet as its weapons platform.

The novelization describes the converted planet:

The fleet of Star Destroyers stood off the white world. Spectacular and isolated, with a mean surface temperature varying from merely cold to permanently arctic, the planet had been altered: its mountains tunneled into, its glaciers hacked, and its valleys modified until it no longer resembled its original naturally eroded form. Those who had remade it had renamed it.

Hollowed out of one snow-covered mountain was a central control facility. At its heart was a great assembly chamber that held hundreds of workstations and their attendant seats.

Not 100% of the planet was technology dedicated to the Starkiller weapon.

Starkiller Base is much more powerful, but it can't be able to be used more than 2x. The reason is because the sun has a limited amount of times that it can be taken to power the weapon.