Where did Poe get another black X-Wing?

After losing his X-Wing on Jakku, how did Poe get (another?) black one?

I mean in the sense of priorities. Was there some sort of dialog with the officer on duty on the flight line:

Officer: Glad to see you've recovered from all that torture, Poe. Here's your new X-Wing.

Poe: That's not mine. It's the wrong colour.

Poe: It's not black.

Officer: Uhm, you and your squadron need to take off at once, we got word that BB-8 needs rescuing right now.

Poe: Sorry, I want it repainted.

Officer: Now?! The galaxy depends on you.

Poe: I save the galaxy in style or not at all.

Officer: < breaks down and sobs>

Why was this obviously canonical scene deleted, I ask?

Or do they have buckets of black paint standing around to spray on whichever X-Wing Poe needs to hop into?

To make this question a bit more earnest: while it's hard to see in the low light on Jakku, was that X-Wing also a black one? I don't have image-by-image capabilities to drill into that well enough. Does somebody have the ability to show a shot that clearly shows the colour, one way or another?

The X-wing that Poe used on Jakku was in the Resistance's standard blue-and-white colors. It wasn't his personal black X-wing.

This is most visible in one of the photos that Annie Leibovitz shot for Vanity Fair, in which Oscar Isaac is seen in costume hanging off the side of a blue-and-white X-wing in the desert: 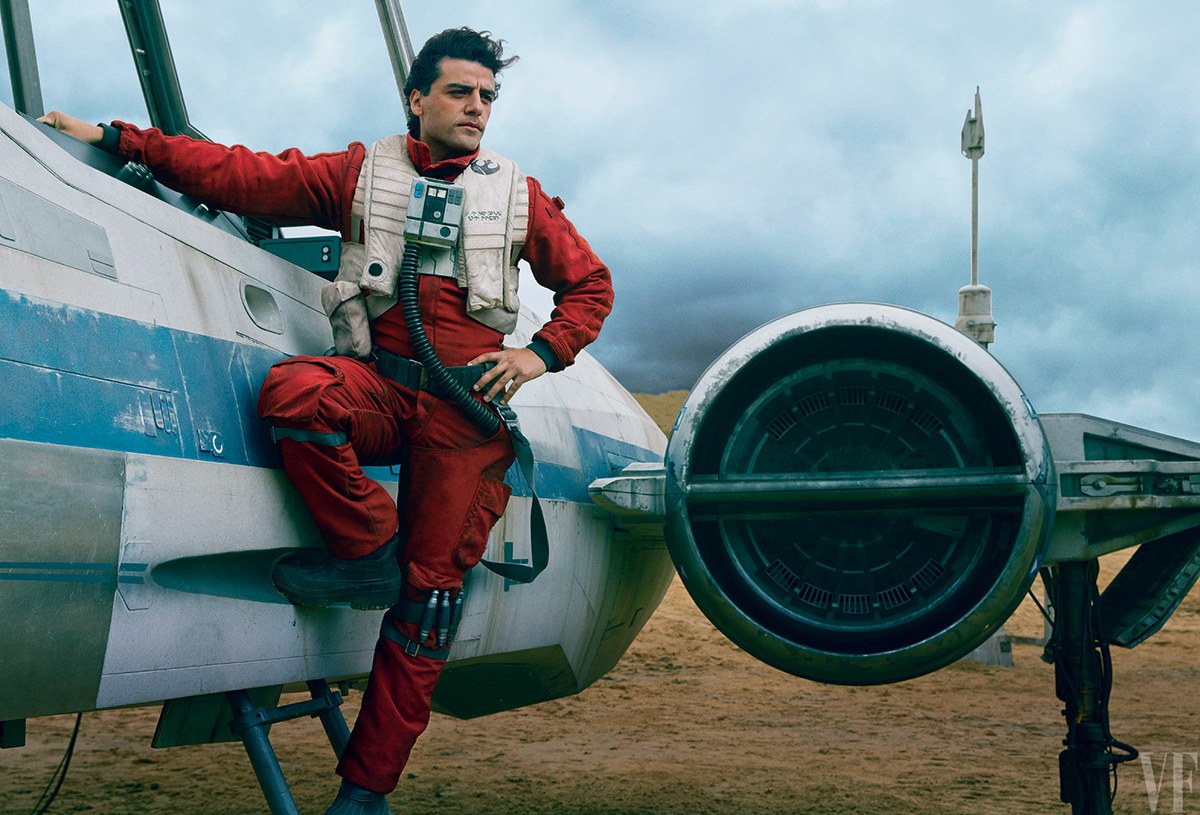 The color scheme is also fairly clear in stills from the film, but it's very clear in this shot from an early behind-the-scenes feature, in which Isaac is seen performing alongside the X-wing prop:

16
Where did Finn get the blueprints for Starkiller Base?
26
Did Rey have an X-wing pilot doll?
3
Why did Poe and Finn's TIE Fighter land so close to the scavenger town?
27
Where did the sun's energy get sucked into Starkiller Base?
10
Why didn't Kylo Ren get more information from Poe?
16
Did Kylo Ren read Poe Dameron's mind?
12
Why did Poe leave his jacket?
8
Did Poe Dameron make custom modifications to his black X-Wing?