Why did they just not replace both of his arms with bionic arms, given that it's so much better than his actual arm?

Because there are also downsides to his bionic arm.

It would seem that Hydra/the Soviets/both/whoever actually gave him the bionic arm in the first place were aware of the fact that despite having advantages, it also has disadvantages, and as such they elected to only replace his missing arm, rather than replacing both.

It's also worth noting that in Captain America: Civil War;

That indicates that despite the advantages the bionic arm brings, it was decided that on the whole, a regular human arm is preferable if possible. That isn't possible in Bucky's case; hence, the bionic arm.

Better is a relative term. In the case of extensive, reconstructive surgery, even on a super-soldier, the idea was likely: Less is more. Given the requirements necessary to make the Winter Solider's arm the weapon that it is, it would require an extreme level of technological sophistication, even for Hydra and SHIELD-level technology.

The technology used to replace Barnes' arm has always been experimental and likely as advanced as anything able to be produced by Hydra. Even so, having a metallic arm meant Barnes was difficult to disguise and was relegated to the role of covert assassin and laboratory animal. 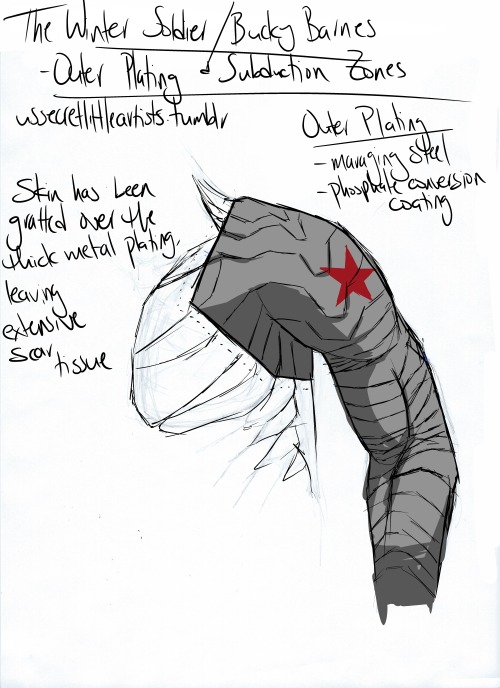 It seems to me that after his fall in Captain America 1, only his left arm needed amputating or it was already torn off. I don't remember which.

the metal arm is strong but the normal arm can perform delicate tasks that require touch. grabbing small pieces of, say, a gun, performing surgery if he gets hit while on a mission, feeling heat or cold, etcetera. having only one metal arm is better than two metal arms or two normal arms.

It's powered by and manufactured of exotic materials which makes the arm very expensive, giving Bucky the arm was simply Hydra repairing a valuable asset.

If a main battle tank requires new tracks its cheaper than building a new tank, indeed you might want to upgrade the tracks while you're at it to prevent them breaking again. However this doesn't justify rebuilding the entire tank out of unobtainium, if you're going to do that you may as well scrap the original and build the super-tank from scratch rather than trying to build a super-tank on a regular tank chassis.

In other words if the robotic Bucky arm is better than the regular Bucky arm why not replace the entire body with a robotic Bucky? A Buckybot if you will.

Because it's wasteful. One super-tank or Buckybot may well be unstoppable but wars are fought on multiple fronts and battles are fought over strategic objectives. If one Buckybot costs as much as five unaugmented Buckys you're better off with the Buckys than the bot because (all else being equal) you'll win more battles that way.

If the enemy fields a Buckybot opposing it with a Buckybot of your own gives you a 50/50 chance of victory, whereas the five Buckys would likely defeat the single Buckybot easily if they ganged up on it because cost doesn't directly equate to effectiveness, there's diminishing returns. This factor of diminishing returns is why Hydra would give a wounded Bucky a robotic arm but wouldn't cut his arm off to equip him with one in the first place. Repairing a potentially valuable asset is justifiable as not repairing him would be a greater loss than the cost of upgrading him, whereas cutting the arm off in the first place is unjustifiable because that Bucky-arm has considerable value.

8
Why doesn't Nick Fury travel with security force?
28
Is Captain America super-human?
27
Does Bucky Barnes Have Superhuman Abilities?
2
Does Bucky Barnes have Dissociative Identity Disorder?
5
Which characters are dead in the MCU as of Guardians of the Galaxy 2?
10
How does T'Challa have the spirit of the Black Panther during Civil War?
13
Did Thanos use the full power of the Power Stone to punch Captain Marvel in “Avengers: Endgame”?
9
Why does Falcon dislike Bucky so much?