Why does Q (nearly always) appear in uniform?

For the most part, when appearing on Starfleet vessels, Q shows up wearing the uniform of whatever crew he visits.

I guess he doesn't have the creativity to create his own duds? Presumably the Q don't "wear" humanoid shapes while hanging out in the Continuum, and obviously wouldn't wear clothes.

But every time he visits Picard or Janeway, he's wearing the same sort of uniform.

If humans are so "pathetic" and "non-enties" from the Q's perspective (and they are), why dress like them?

Uniforms that he wears to mock humanity (typically Picard) as being an aggressive, violent child-like race

... the same humanoid face and figure as with the Elizabethan dress, but now the green officer's uniform of the U.S. Marine Corps. Over his jacket pocket three rows of medals and his narrow garrison cap shows the bars of a Captain.

"Q" (MARINE CAPTAIN): Actually, the issue at stake is patriotism. You must return to your world and put an end to the communists. All it takes is a few good men.

PICARD: What? That nonsense is centuries behind us!

"Q" (MARINE CAPTAIN): But you can't deny Captain, that you're still a dangerous, savage child-race.

PICARD: Most certainly I deny it. I agree that we still were when ... humans wore costumes like that four hundred years ago...

"Q" (MARINE CAPTAIN): At which time you slaughtered millions in silly arguments about how to divide the resources of your little world. And four hundred years before that you were murdering each other in quarrels over tribal god-images. And since there have been no indications that humans will ever change

PICARD: But even as far back as that costume, we had begun to make rapid progress.

"Q" (MARINE CAPTAIN): Oh? Shall we review your "rapid progress"?

The "Q" visitor moves a hand again to create THE SAME SOUNDS and the SAME BLINDING FLASH, producing the same human image but this time unshaven and with an UGLY AUTOMATION LOOK AND IN THE UNIFORM OF A MILITARY OFFICER FROM THE MID 21st CENTURY WARS. Q's voice sounds a bit drugged now as he eyes his new costume.

"Q" (21ST CENTURY) (interrupting): Rapid progress to where humans learned to control their military with drugs?

Uniforms that he wears specifically to annoy Picard, Riker and Janeway 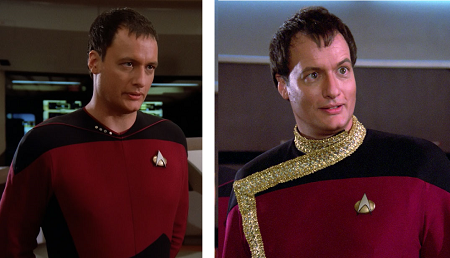 PICARD: You are not a Starfleet admiral, "Q"...

"Q" (ADMIRAL): Neither am I an Aldebaran serpent, Captain. But you accepted me as such.

Riker nods, a hint of the irony of this on his features.

RIKER: He's got us there, Captain.

It's a symbol of authority

Q's whole shtick is that he thinks he's superior to everyone else. The best way to look superior to anyone on a starship is to have the highest-ranking uniform around.

As to why he wears a captain's uniform and not an Admiral's uniform or some sort of "Ultra-Admiral" uniform of his own design, I think he does that just to annoy the two captains.

In any military or quasi-military institution (eg Starfleet) the uniform and associated insignia has a particular significance because is is a very real symbol of authority. On one hand this is down to practical considerations as it is necessary for an officer or NCO to be able to assume authority regardless of whether they are known to the individuals they command or not. A large military organisation would quickly break down in a crisis if every leader had to assert themselves by force of personality in order to be able to issue orders. In fact this dynamic is a common trope especially in US centric sci-fi (see especially the leadership tensions between Galactica, Pegasus and the civil administration in the BSG reboot).

In many organisations the uniform and insignia also have specific legal status and may be fundamental to the sense of identity, loyalty and motivation of a unit. this goes back at least as far as the Roman Empire where the 'Eagle' insignia of a Legion was a physical symbol of their honour an identity. Certainly in the modern British army apparently archaic symbols like Colours (regimental standards) and cap badges and berets are treated with more reverence than the actual 'uniform' (in the sens of official clothing) or even badges of rank. There is also the fact that (for UK armed forces that least) that 'commissioned' ranks and Colours have a very specific legal authority originating from 'the Crown' (ie the seat of national sovereignty) as opposed to just being administrative ranks and the same applies to sworn Police Officers.

There is also the fact that a recognizable national uniform is a key part of of the rules of war and fighting in uniform gives specific legal protection to the wearer distinguishing them from eg spies and saboteurs.

There is also a strong sense that both a uniform and (especially) badges of rank are something which need to be earned and imply the acceptance of a certain code of behaviour.

So for an obvious enemy to appear in Star-fleet uniform is a clear provocation as it is both appropriating a culturally important identity and treating it as trivial. This is emphasized by the fact that Q goes out of his way to act in a way which is the antithesis of conventional military discipline and deportment.

On a more subtle level Q is also mocking the jingoism and unthinking nationalism which Starfleet overtly rejects but is still arguably implicit in it's quasi-military discipline.

The Q are non-corporeal, least so different there is no way to extrapolate them. When Q first appeared he manifested himself as a triple headed serpent. To appear more interactive, he manifested in a form Picard would idolize, a Sea Faring captain. Then as a United States Marine to mock uniformed comformist service, then as an Overdressed starfleet admiral. The reason to mock and troll them.

61
Why did Deanna Troi keep wearing a Starfleet uniform after Chain of Command?
23
Why is Data's uniform gold and not red?
9
Why does the female changeling always appear in human form?
13
How did the crew of the Enterprise-D put on their uniforms?
17
Where were the advanced species and civilizations of ST:TOS during the war against the Borg?
36
Why doesn't Seven of Nine wear a Starfleet uniform?
3
Does Q ever appear when an admiral is onboard?
5
Why is Michael Burnham’s prison uniform - not uniform?