Book with a single agent destabilizing an Earth-centric galactic government

I'm trying to find a title for a book that I misplaced years ago. It's a SciFi book set in a future with a galactic empire and an Earth-based central government. There is a single planet that is not part of the Empire. Due to political instability in the Empire, a new enemy is needed to focus people and the sole planet is designated as the enemy.

This individual planet is a true egalitarian community, little crime. When crime does happen, it's punished in the public square by a computerized whip and the criminal released. They send an agent to Earth with the goal of destabilizing the government. One method used is leaflets denoting the rise in prices of various staple goods such as bread, milk and eggs over the course of the previous month or week.

I recall reading this book the first time about 20 years ago.

The use of economic propaganda to bring down a galactic empire sounds a lot like the LaNague Confederation series by F. Paul Wilson. In particular book 1 from 1980 , Enemy of the State.

In Wilson's novel, he extends the "squeeze" of confiscatory taxation and currency debauchment to a conclusion involving a Weimar Republic-style hyperinflation that brings down a galactic empire – and from which humanity's only hope of rescue arrives in the form of an anarchist conspiracy to complete the Empire's downfall and replace that government's "official counterfeit" with honest money.

Other points that match:

One method used is leaflets

Check. The Anarchist group prints out regular leaflets advising folks about the pending downfall of the government/empire. The leaflets look like this (image from the book): 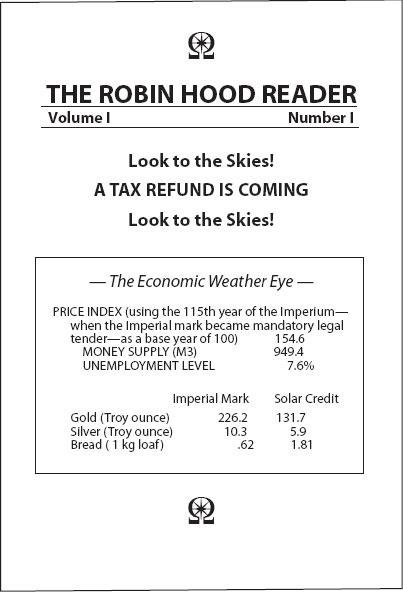 There is a single planet that is not part of the Empire. Due to political instability in the Empire, a new enemy is needed to focus people and the sole planet is designated as the enemy.

Partial check. There are actually a handful of planets not associated/part of the empire including Tolive which is the planet from which Peter Lanague the agent comes as well as Flint, a 'warrior culture' planet. But, the empire does use scapegoating of other worlds such as Tolive (and eventually

an alien species which is discovered.

Check. Peter LaNague is the primary agent from Tolive who is sent to bring down the empire. Though he has help from two "Flinters" (think mystic ninja warriors crossed with economic gurus :-)

I don't remember the part about the public floggings. But, it has been quite a while since I have read the series. Too, the Empire is NOT based from Earth. Instead Emperor Metep VII rules from the planet Throne.

Description of the Imperium