What is the origin of the word “Chewbacca”?

Have you ever noticed that Chewbacca can't say the word "Chewbacca"? What is the out-of-universe origin of this name? George Lucas is a well known fan of Japanese film, but I can't imagine him naming a character Chuu-baka (eg. "moderately stupid"). What language does this come from?

star-wars inspiration chewbacca
share|improve this question
edited May 11 '16 at 10:20

In "The Making of Star Wars (Enhanced Edition)" by J. W. Rinzler, Lucas is quoted as saying that the name came about while he was playing around with combinations of Wookiee-sounding words:

Chewbacca: “I came up with a whole bunch of Wookiee words, just changing words around, and I liked Chewbacca the best.”

As such, it appears to be meaningless.

You may also like to note that the word "Wookiee" came from an improvisation on the set of THX 1138 by Terry McGovern.

The word Wookiee came from THX 1138, when actor Terry McGovern was doing wild track voice-overs and said, “I think I just ran over a Wookiee.”

According to the (now non-canon) sourcebook 'Star Wars RPG: Galactic Campaign Guide', the word "Chewbacca" is made up of two separate words in Shyriiwook, the language of the Wookiees; Chew (meaning "honored, noble, trusted") and Bacca (meaning "ally, brother/sister, friend). 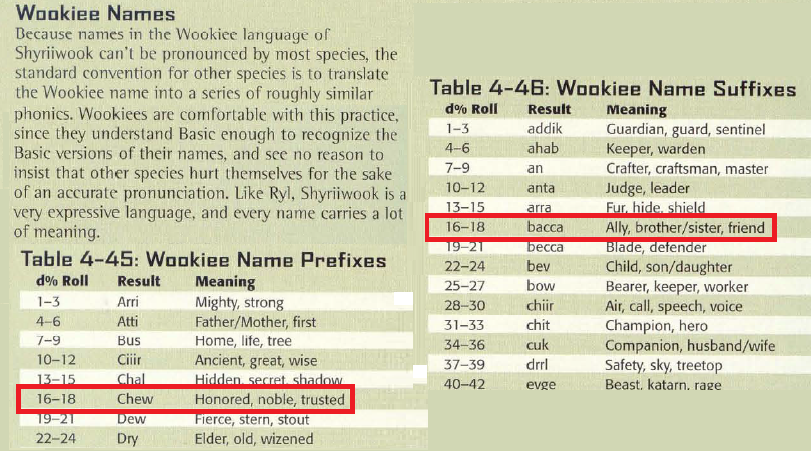 Well I am not 100% sure of the validity of this (can't find anything other than what I have already to back it up as fact) but it would see that Chewbaaca was inspired by George Lucas's dog Indiana (the same dog that was responsible for Indiana Jones!) and the name Chewbacca originated from the Russian word “Sobaka” (собака), meaning “dog.”

The name “Chewbacca” was derived from the Russian word “Sobaka” (собака), meaning “dog.” The term “Wookiee” came from voice actor Terry McGovern. When he was doing voice-over tracks for Lucas’ directorial debut, THX 1138, McGovern randomly improvised “I think I just ran over a Wookiee” during one of the sessions.

Chewbacca's creation as a "gentle, hairy, non-English-speaking co-pilot" was inspired by George Lucas seeing his own dog sitting up on the passenger seat of his car. It is said that Chewbacca's name is derived from собака (sobaka), the Russian word for dog.

Maybe someone with better Googling skills will be able to ascertain if this is factual or not but it does seem to have spread rather far and wide!

Not the answer you're looking for? Browse other questions tagged star-wars inspiration chewbacca or ask your own question.

3
Did any of the EU material come from George Lucas?
20
What is the origin or significance of C-3PO's name?
5
Is there any connection between Mace from Caravan of Courage and Mace Windu?
21
What is the origin of the name “Jedi”?
13
Are there other very common non-invented English names in the Star Wars films other than Ben, Luke and Owen?
14
Are the Knights of Ren a reference to the Seven Samurai?
7
Is the monster Godzilla based on an old myth/legend?
19
Was Wicket W. Warrick named after Warwick Davis?