In Star Wars: A New Hope, why was one officer dressed in white?

This character appears in Star Wars: A New Hope aboard the Death Star during an admirals meeting. 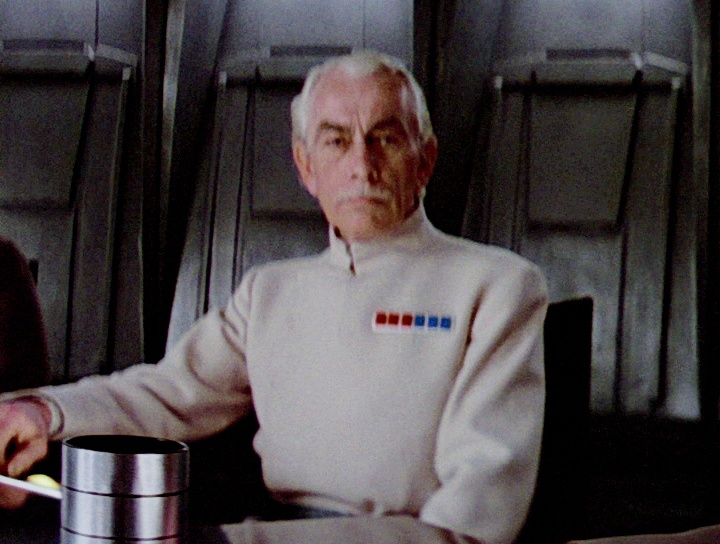 It appears he is wearing a white (possibly ivory) uniform. All the other officers wear gray, black, or olive (I am not sure what the official colors are). I do not recall any other officer of the Empire wearing a uniform like this...

Who is this suave gentleman, and why was he wearing white?

Wullf Yularen was an admiral for the Galactic Republic during the Clone Wars and later a colonel in the Galactic Empire's Imperial Security Bureau. He was eventually promoted to Deputy Director of the Naval Intelligence Agency. Yularen was one of the officers assigned to the Death Star.

I haven't found any explanation of why he's wearing a different uniform, but it might be tied to his position as Deputy Director of Naval Intelligence much as with the United State "Full Whites" naval uniform. Different division, different uniform. You can see him with someone else with the same uniform here from A New Hope. Out of universe, the real answer is probably closer to why there was a wolf-man and a person in a recognizable Gemini suit. Low budget, so they grabbed what costumes they could.

As Fuzzyboots has correctly indicated, this individual is Admiral Wullf Yularen, later confirmed to be the Deputy Director of the Empire's Naval Intelligence Agency, the Imperial Security Bureau (ISB).

It appears that this uniform (white, rather than olive or grey) denotes that one is a member of this agency, as can be seen with other ISB agents in both Legends and Nu-Canon sources. 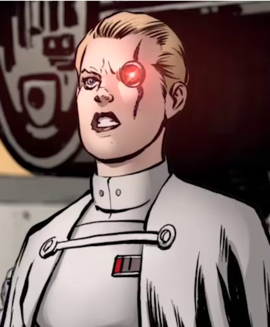 Interestingly, the decision that this uniform should denote a specific branch of the Imperial Service itself seems to be a retcon. In other media such as the Thrawn comics below, the white uniform appears is worn by two Grand Admirals (Thrawn and Takel), neither of who has any obvious connection to the ISB. 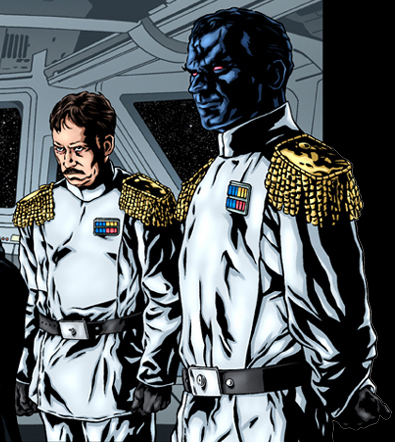 Interestingly Agent Kallus from the SW cartoon Rebels does not follow this convention, so that may have been changed OR his may be some kind of new field uniform.

Another side note the ISB managed the Empire's Secret Police and had a rivalry with Imperial Intelligence. Assuming all that wasn't retconned.

104
Why do castle gates in GoT open inwards?
50
Is there a reason given in-universe for Orson Krennic's outfit beyond pure ostentation?
36
What evidence is there that proves/disproves there was a Gemini Earth Astronaut that appeared in the original Star Wars Cantina scene?

8
Is there any background to this depiction of the Imperial Crest on Empire Day?
17
In universe answer for Rebel uniforms in *Star Wars Episode IV: A New Hope*?
40
Is there really "No Underwear In Space?"
31
What was Darth Vader's official role (or rank) in the Empire?
30
Do we ever see regular (non-stormtrooper) ground troops?
66
Who is this character on the Star Wars: A New Hope poster?
12
Does Solo serve as a Stormtrooper?
7
Why were all the basic imperial uniforms starting in The Empire Strikes Back gray?