Why did an X-wing pilot scream something that sounded like "Yes!" during the Battle of Yavin?

Near the end of the Battle of Yavin, one of the X-wing pilots screamed something that sounded like "Yes!". At about the same time, Luke checked his six and saw an explosion on the surface of the Death Star. It looked similar to the earlier incident in which Luke strafed the Death Star and "got a little cooked". There's also a change in the music.

What was the significance of this explosion, in which a character shouted for joy and the music changed?

Note: the idea for this question came from http://www.moviemistakes.com/film1226/questions/page2.

You are, of course referring to the death of Red Leader. He's not yelling "yeah!" so much as just screaming because he's about to die.

[Laserbolts are flung from Vader's TIE fighter, connecting with Red Leader's Rebel X-wing fighter. Red Leader buys it, creating a tremendous explosion far below. He screams and is destroyed.]

Interestingly, in the novelisation he yells something different:

Something screeched in Red Leader’s helmet, and fire started to consume his instrumentation. “It’s no good,” he yelled into his pickup, “I’m hit. I’m hit …!”

In the new (canon) junior novel it's just described as a scream.

There was a horrible scream as Red Leader crashed into a nearby tower, his ship taken down by the fire from the strange TIE fighter. Luke saw it all happen through his window and felt some of his hope shrivel up.

I originally thought that in the 2006 Manga version (Perfect Evil, Part I) it was Red Leader shouting

but further investigation has revealed that the shouter shown below was most likely "Pops" (Gold-Five). 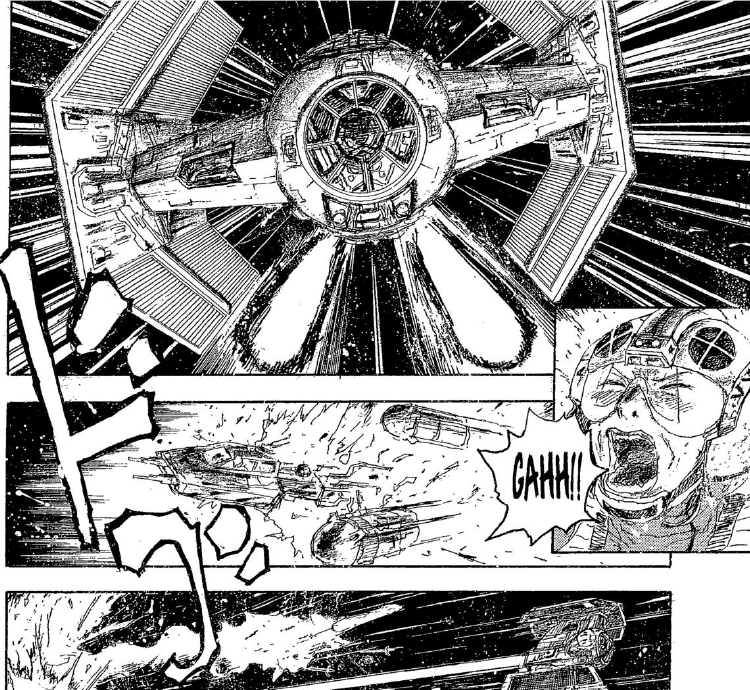 Why is this explosion so important that it warrants a change of music?

As the battle progressed, groups of three fighters would enter trench and most of the time, not all three would make it out, or the whole group would be destroyed. Darth Vader and his escorts were quite effective at taking out rebel fighters in the trenches - so much so that leading up to the moment in question no trench run actually made it to the point of even launching torpedoes. Also, fighters not currently in the trenches were being destroyed by turbolasers and TIE fighters.

Right before Red Leader (the pilot who screamed before his X-Wing crashed as referenced in the question) died, he completed the second to last trench run of the entire battle, and the first run that actually made it to the end of the trench where Red Leader launched torpedoes. Unfortunately, Red Leader's torpedoes did not score a direct hit:

RADIO VOICE: Did it hit?
RED LEADER: Negative. Negative. It didn't go in. Just impacted on the surface.

So the run was a failure, Red Leader was the only member of the three-fighter group who survived the run, and immediately after that Darth Vader scored a hit on Red Leader's starboard engine, which is what led to his screaming crash into the surface of the Death Star.

It is significant because the only rebel fighters left in the battle right before this death are Red Leader, Luke, Wedge, Biggs, and the mysterious Y-wing pilot. With Red Leader dead:

It's Luke, his childhood friend, and a new friend versus the entire Empire alone in the trench with Vader and two TIE fighters on their backs.

Here's a script excerpt that makes it a little clearer than watching the movie:

LUKE: (over headset) Red Leader, we're right above you. Turn to point...

Luke tries to spot Red Leader. He looks down at the Death Star surface.

RED LEADER: (over headset) Stay there...

RED LEADER: (over headset) Get set to make your attack run.

Vader's gloved hands make contact with the control sticks, and he presses their firing buttons.

Red Leader fights to gain control of his ship.

EXTERIOR: SPACE AROUND THE DEATH STAR.

Laserbolts are flung from Vader's TIE fighter, connecting with Red Leader's Rebel X-wing fighter. Red Leader buys it, creating a tremendous explosion far below. He screams and is destroyed.

Luke looks out the window of his X-wing at the explosion far below. For the first time, he feels the helplessness of his situation. [This is where the musical moment happens]

The actual scene in the movie isn't exactly like the script or the novelization, and it's not clear exactly what is going on when Red Leader dies. One interpretation is that his starboard engine is out and he doesn't have enough engine power to avoid crashing into the Death Star, but his ship is otherwise intact. So he could have been deliberately diving into a turbolaser battery and issuing a kind of battle cry as he did so. Or it could have been a cry of fear and rage as he helplessly careered into the space station.

You seem to be referring to the moment where Biggs dies.

Biggs looks around at the TIE fighters.

Luke looks into his targeting device. He moves it away for a moment and ponders its use. He looks back into the computer targeter.

BIGGS (over headset) Hurry up, Luke!

EXT. SPACE AROUND THE DEATH STAR

Vader and his wingmen race through the Death Star trench. Biggs moves in to cover for Luke, but Vader gains on him.

Biggs sees the TIE fighter aiming at him.

Vader squeezes the fire button on his controls.

Biggs' cockpit explodes around him, lighting him in red.

EXT. SURFACE OF THE DEATH STAR

Biggs' ship bursts into a million flaming bits and scatters across the surface.

Leia and the others stare at the computer board.

Luke is stunned by Biggs' death. His eyes are watering, but his anger is also growing.

Biggs isn't cheering, he's yelling in fear as Vader is about to destroy him.

The scene briefly shifts to a somber tone, as you note, as Biggs is one of Luke's oldest friends, and Luke is momentarily stunned by the loss of his friend.

52
Who was flying the Y-Wing when the Death Star exploded?
2
Why is Red Leader flying a Y-Wing?