Why would anyone make a dragon enclosure out of wood?

Four fully grown, enormous, vicious-looking dragons were rearing on their hind legs inside an enclosure fenced with thick planks of wood, roaring and snorting - torrents of fire were shooting into the dark sky from their open, fanged mouths, fifty feet above the ground on their outstretched necks.
(Goblet of Fire, Chapter 19, The Hungarian Horntail).

A thought on the dragon enclosure in Goblet of Fire. It appears to be made out of wood. Dragons are, of course, fire-breathing creatures of huge destructive force.

Later, some stands (of an unknown material) are added around the enclosure. We do know, however, that also in the vicinity of the dragons are a tent where the champions huddle and the Forbidden Forest. All of these substances have one thing in common - they are highly flammable.

Rowling is aware that putting dragons and wood next to one another isn't a good idea and even has Hermione being sassy about it in an earlier book.

He looked very pleased with himself, but Hermione didn't.
"Hagrid, you live in a wooden house," she said.
(Philosopher's Stone, Chapter 14, Norbert the Norwegian Ridgeback).

Why would the Triwizard Tournament organisers (or any self-respecting grown-up) pick a wooden enclosure in the middle of a forest as a place to hold four fire-breathing dragons?

harry-potter dragons
Share
Improve this question
asked May 12 '16 at 19:07

Knowing that the enclosure was going to be holding dragons, the wood was most likely treated with a flame resistance spell known as the Flame-Freezing Charm

We see it in practical use with a witch during the Witch Trials of the 1400s.

Indeed, Wendelin the Weird enjoyed being burned so much that she allowed herself to be caught no less than forty-seven times in various disguises." - Bathilda Bagshot, A History of Magic

Besides that, there are spells such as Augamenti to make water that would be able assist any fires the dragons started.

If you doubt that the charm would be able to work... I would say that depending on how thick the logs were it may take them a while burn.

A pen large enough to hold a dragon would need some serious planks. I submit they would need to be about a large as a telephone pole. While they can catch fire, it takes a large sustained flame or a bolt of lightning to really cause damage. As seen in these picture the size comparison is at least plausible. 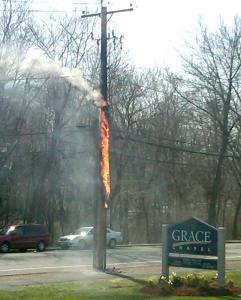 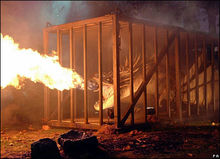 Not the answer you're looking for? Browse other questions tagged harry-potter dragons or ask your own question.

19
Why would Severus Snape hang out with future Death Eaters?
6
Why didn't Voldemort make his Horcruxes out of normal objects?
14
Why would the Headmaster try re-curing Dragon Pox?
8
Would the diadem possess anyone who tried to wear it?
6
Why isn't Daenerys searching for more dragon eggs?
78
Why did Wood have Muggle golf balls?
4
What would Fiendfyre do to a dragon?
46
Why would anyone even use a Portkey?
6
Fantasy trilogy from the 90s where guy starts out as the only person dragons are afraid of, and by the third book he turns into a dragon