In which episodes does Rod Serling say "submitted for your approval?"

I'd always assumed this phrase was iconic because it was a standard part of the intro monologue. Apparently, this is not the case.

In which episodes does it appear? Bonus points for in-context quotations.

Although the phrase "Submitted for your approval" from Rod Serling's opening narration has come to be closely identified with the show (and is often used by Serling impressionists), it is actually heard in only three episodes: The Twilight Zone: Cavender Is Coming (1962), The Twilight Zone: In Praise of Pip (1963), and The Twilight Zone: A Kind of a Stopwatch (1963).

Excerpt from "Cavender is Coming":

Submitted for your approval: The case of one Miss Agnes Grep. Put on earth with two left feet, an overabundance of thumbs, and a propensity for falling down manholes. In a moment, she will be up to her jaw in miracles brought by apprentice angel Harmon Cavender, intent on winning his wings. And though it's a fact that both of them should have stood in bed, they will tempt all the fates by moving into the cold, gray dawn of The Twilight Zone.

Excerpt from "In Praise of Pip":

Submitted for your approval, one Max Phillips, a slightly the-worse-for-wear maker of book, whose life has been as drab and undistinguished as a bundle of dirty clothes. And, though it's very late in his day, he has an errant wish that the rest of his life might be sent out to a laundry, to come back shiny and clean, this to be a gift of love to a son named Pip. Mr. Max Phillips, homo sapiens, who is soon to discover that man is not as wise as he thinks - said lesson to be learned in The Twilight Zone.

Excerpt from "A Kind of a Stopwatch":

Submitted for your approval or at least your analysis: One Patrick Thomas McNulty, who at age 41 is the biggest bore on earth. He holds a ten-year record for the most meaningless words spewed out during a coffee break. And it's very likely that, as of this moment, he would have gone through life in precisely this manner, a dull, argumentative bigmouth who sets back the art of conversation a thousand years. I say he very likely would have, except for something that will soon happen to him, something that will considerably alter his existence and ours. Now, you think about that now, because this is The Twilight Zone.

According to IMDb, it appears in three episodes:

Although the phrase "Submitted for your approval" from Rod Serling's opening narration has come to be closely identified with the show (and is often used by Serling impressionists), it is actually heard in only three episodes: The Twilight Zone: Cavender Is Coming (1962), The Twilight Zone: In Praise of Pip (1963), and The Twilight Zone: A Kind of a Stopwatch (1963).

He says something similar in "To Serve Man", which predates "Cavender Is Coming":

Fantastic! Unbelievable! Respectfully submitted for your perusal: a Kanamit.

—The Twilight Zone "To Serve Man"

It was also used in "The Trouble with Templeton", A Broadway actor who travels back in time to discover his late wife is nothing like the woman he so fondly remembers. It was just shown in the 2:00 a.m. episode of the 2020 New Year SYFI marathon. 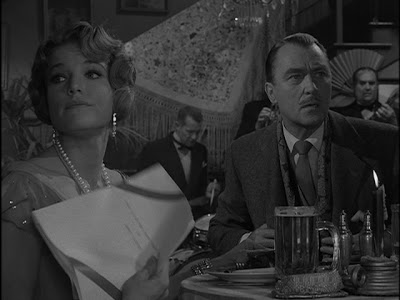 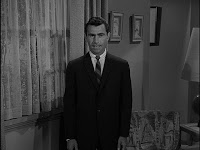 Pleased to present, for your consideration, Mr. Booth Templeton, serious and successful star of over thirty Broadway plays, who is not quite alright today. Yesterday and its memories is what he wants. And yesterday is what he’ll get. Soon his years and his troubles will descend on him in an avalanche. In order not to be crushed Mr. Booth Templeton will escape from his theatre and his world, and make his debut on another stage in another world that we call the Twilight Zone.

The Twilight Zone Vortex, "The Trouble with Templeton"

Not the answer you're looking for? Browse other questions tagged the-twilight-zone or ask your own question.

4
Missing Episodes from the 1985 "The Twilight Zone"