What is the name of this book about Earth becoming a second class planet to Starhome?

The main character of this book was employed by the governments 'alien management' department and the plot of the book centered around terrorist threats to the place where aliens with enviromental needs were housed, and the fact that the only other human planet, based on the concept of efficiency and logic called Starhome was about to outclass Earth. There were blue aliens who legs bent backwards called 'Relgans'(or similar) and anti-hol was a thing (to sober up).

The book cover I remember had a rocketpad with a rocket on the front, either about to take off or in the process of, but I can't for the life of me remember the book's name. Can anyone help?

story-identification books
Share
Improve this question
edited May 23, 2017 at 4:08

This is The Long Result by John Brunner. There are a number of elements that match your description; 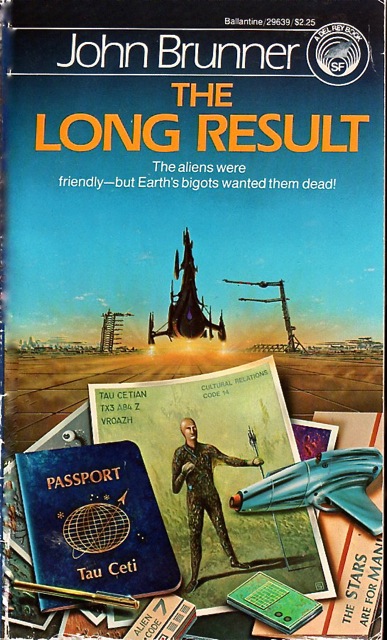 12
Novel where “sub-standard” humans are sent to perform space exploration
9
What is this book about psychic juvenile delinquents?
5
What book is about a planet of feline humans?
3
Fantasy book about a female travelling around earth to find a man and becoming immortal
6
Book about a man becoming a saint for humanity
5
What was this book featuring a family becoming wealthy off investments via time dilation?
18
1990s movie. Aliens infiltrating earth. Protagonist tries to stop them