I watched many years ago when I was a kid this animated film, and I just can't find it. It may be an episode from an anime, but I don't think so, as I remember it being longer than that... Here is what I remember:

I recall it starts with the protagonists in their house, and a mysterious ad appears on TV about this nice holiday place. They decide to go, and it is this mysterious house/hotel in the beach. It is quite weird because there are mountains with snow nearby to ski too.

Then it is revealed to them that they were chosen (or something) to travel to the future to save humanity because robots have enslaved them. The person from the future is in some sort of vehicle because they aren't able to walk, as they got used to being transported in personal modules.

In the future, the world is dominated by this robot, with a Very large head (and I think it was blue), that looks like a mad scientist, and is able to fabricate other robots (so they don't need humans). At the end they destroy the robot, and save the enslaved humanity.

I hope someone knows which one it is!

I found it! I decided to have another look, and for some reason this time I managed to find it. I have no idea why I didn't find it before, because I did think it probably was a Doraemon movie, but couldn't find it online in lists of Doraemon movies...

Anyway it's Doraemon: Nobita and the Tin Labyrinth! 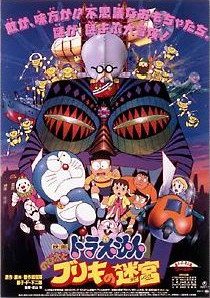 Nobisuke watched a strange advertisement of a fantastic resort on television at midnight. Sleepy as he was, he made a reservation even though he didn't even realize he was talking to the advertisement. The next day he discussed with the family their holiday plans, only to realize that he could not find the place anywhere on Earth. All of a sudden though, there was a suitcase in Nobita's room and intrigued as he was, he opened it only to find a portal to the beautiful resort managed by tin robots. Even better, it is absolutely free. It seems that there is a hidden agenda behind the person who invited them here. As they go there they find out that Nobita and Doraemon are invited to stay in brikin hotel for free. They are enjoying and having fun but then suddenly they are attacked by the army of napo and the Nobita is saved by Doraemon but Doraemon is taken by the army. They ask him how he came here but when he refuses to tell and wants to go back to Nobita, they shut down Doraemon giving him electric shocks. Then the story takes a shocking twist.

Not the answer you're looking for? Browse other questions tagged story-identification time-travel robots anime or ask your own question.

13
Movie about some cowboys who travel into the future (to our time)
30
Title of a time travel movie involving a boy in alien armor and a girl?
7
Cartoon short film involving mission to a Mars base which fired missiles to Earth containing creatures
6
Short utopic story where robots “save” humanity
2
Warring aliens transfer mind to transformer like robots in 80s/90s animated movie?
6
movie about a robot that thought it was human and saved humanity
5
Japanese short film on a robot travel to the past
8
Short story with time travel to future with humanity nearly extinct, narrator suggests survivors to be robots before revealing themself as a robot
4
90s/2000s anime/cartoon with a boy, a girl, and a robot looking for seven gems to prevent the planet from blowing up
44
Movie where a boy is transported into the future by an alien spaceship