How did Snoke's Hologram Block the Lighting?

In the Force Awakens, the first scene Snoke is in is sort of an unexpected visual - a giant man. We soon learn that this large figure is actually a scaled-up depiction of a presumably 7-foot-tall being. But, regarding the hologram, I have several questions regarding how his hologram figure is depicted.

In practically every installment so far, holograms are represented as a form of light projected in a 3D field above a hologram projector. However, Snoke's depiction shows that his holographic image is blocking the light in the room that the hologram projector is in. 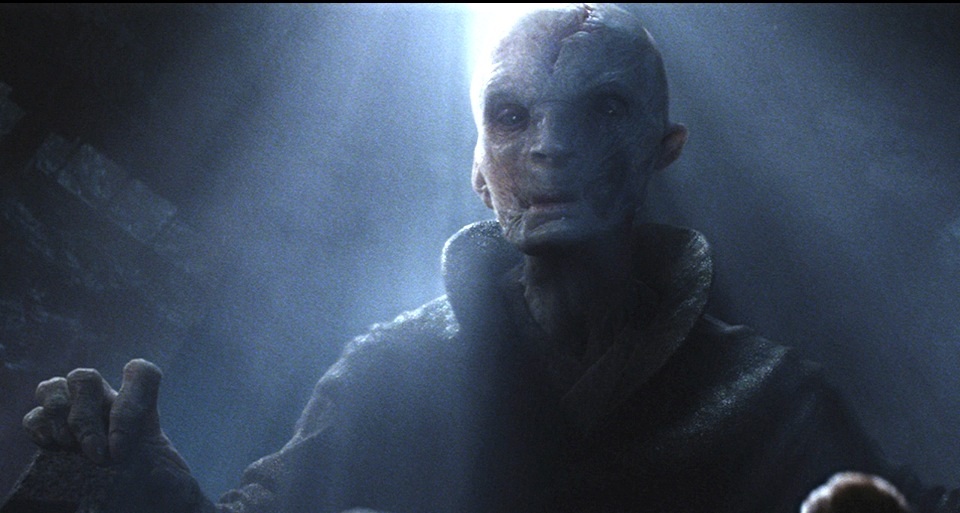 Assuming that the holograms are the same technology, how is it possible that a 3D image made of light (Snoke's depiction) blocks another light source opaquely. In fact, you can even see that the (our) left side of Snoke's face is lit up better because the light is not fully blocked on that side. This means that not only is a 3D image made of light blocking another very bright source opaquely, but the 3D image is also solid in some way so that it responds realistically to the lighting around it. The only way for this to be possible is if Snoke's hologram recorder is in a room where the physical Snoke sits in the exact same position with a physical light at the exact same angle and position relative to him.

Of course, this seems nonsensical and illogical so I'm looking for a better answer. Perhaps I am completely off, but I couldn't think of one, given that in the other two trilogies, the blue holograms were translucent and never responded to the destination projector room's lighting.

star-wars the-force-awakens
Share
Improve this question
edited May 18 '16 at 0:14

Your assumption that the light and hologram are not connected appears to be wrong - when the rocks start falling from the roof, the light source changes colour and the hologram is disrupted at the same time, showing they are part of the same system. The effect can be seen in this clip

. Presumably they leave the light part of the hologram system on when Snoke isn't being project so people don't walk into things on the way out.
Share
Improve this answer
answered May 18 '16 at 13:57

8
Why are Jedi more agile in T-Canon than G-Canon?
13
How did Yoda know that Anakin killed the younglings before watching the security hologram?
21
Did Vader deflect, absorb or block Solo's blaster?
26
How did Satele Shan block this lightsaber thrust?
2
How do Star Wars hologram communications work?
4
How did Han and Chewie find the Falcon?
31
How big is Snoke's command ship compared to a Super Star Destroyer?
13
Who are the two cloaked figures in Snoke's throne room?