Why did the Jedi turn totally Light side?

In legend time of Jedi (Je'daii), the Je'daii are in balance between dark and light sides of the Force, but a thousand years later, we see that the force users (both Jedi and Sith) are either turned totally the light side or the dark side of the force.

Why did this happen? or When did that happen ? Is there any reference about this event ?

More about the thought of the Je'daii order on the turning to one side of the force;

“Immersion in the dark side of the Force can seem stronger, more freeing, more triumphant than existing within balance. But only from the outside. Do not be tempted. Those who are swallowed by the darkness lose not only balance and control. They lose their souls.”

Note: A reference for Jedi in Legends can be found in Star Wars: Dawn of the Jedi and Star Wars: Into the Void.

The split of the Je’daii into Light and Dark is referred to as the Force Wars:

The planet Tython, in the Deep Core, provided the first-known conflict between the Force’s light and dark sides. Disciples of the light side (the Ashla) fought the followers of the dark side (the Bogan), in what is now known as the Force Wars.

They seem to have begun as a conflict between the Je’daii and the Rakata, and later become a conflict within the Order itself.

The Rakata were an enormous empire that drew their power from the Dark Side of the Force. They sought to conquer Tython in order to renew their connection to the Force, and to gain access to the Infinity gate thereon, a source of cheap travel1: 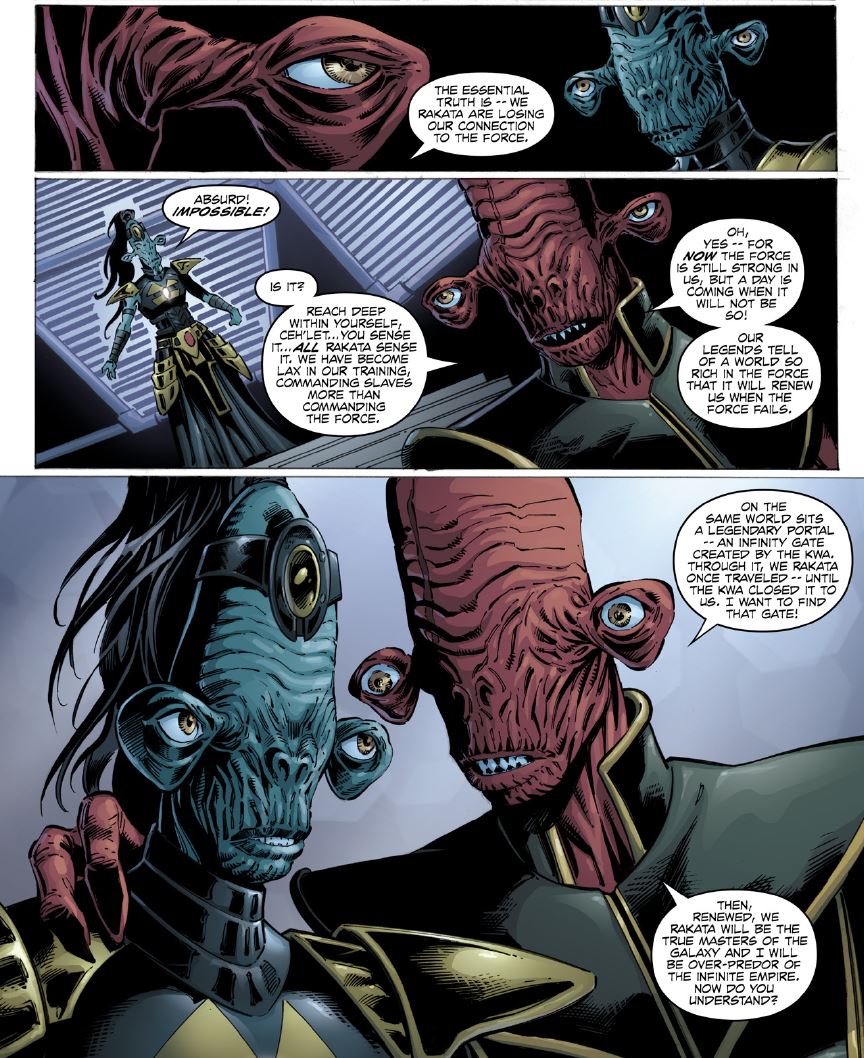 According to an interview with John Ostrander, the author of the Dawn of the Jedi series, this Rakata invasion is what led to the division of the Je’daii:

The second, and the event that begins to polarize dark and light within the Jedi Order, will be set into motion when another species enters the Tython system shortly before the Force Wars begin.

This makes a great deal of sense. The war between the Je’daii and the Rakata brought unprecedented violence, on a world that was previously in balance. Further, since the Rakata drew on the Dark Side alone, their invasion might have turned many in the Order away from the Dark Side as a source of power.

On the other hand, it might also have convinced some Je’daii that the Dark Side was the only viable source of power against the Rakata, or that only by using the Dark Side could they be as powerful as the Rakata were. 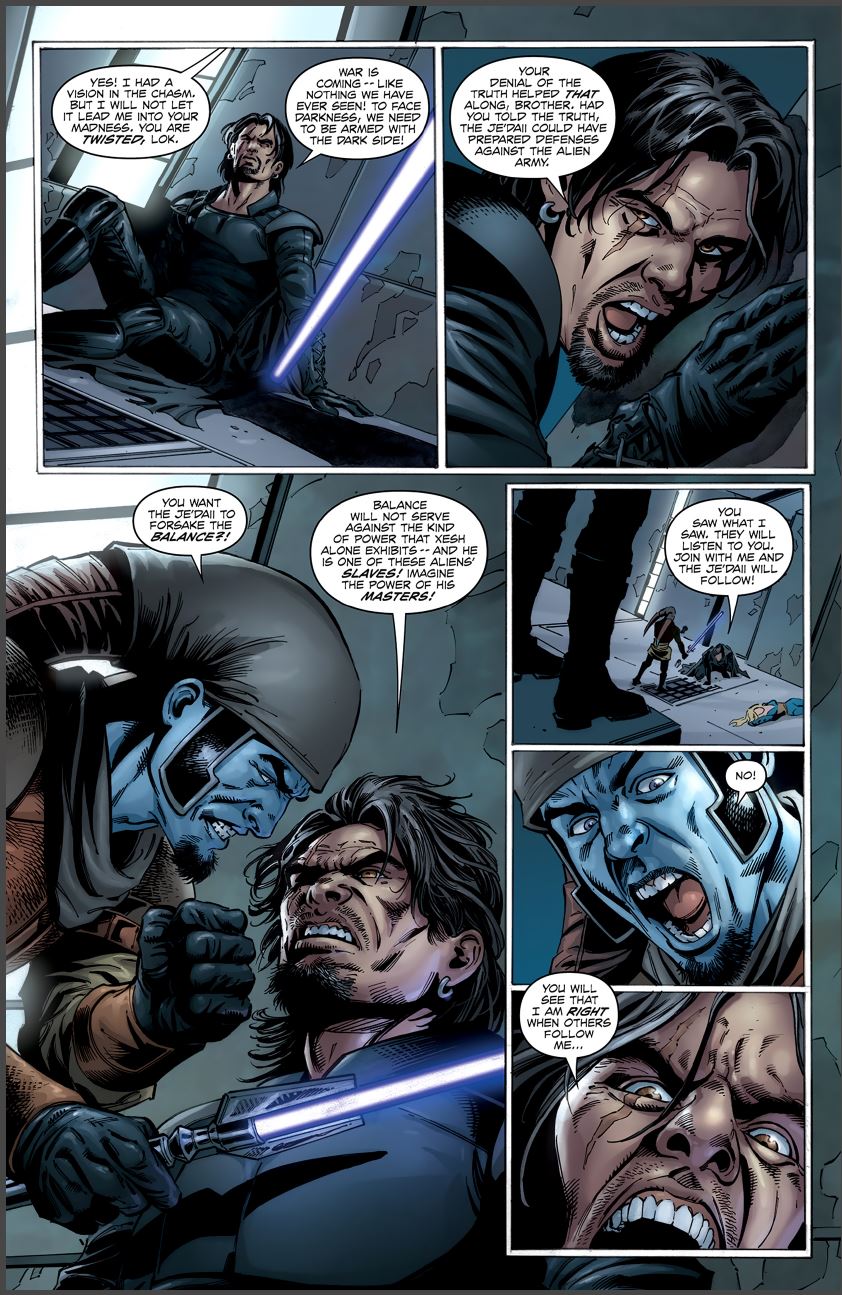 In particular, the use of forcesabers seems to have helped create a rift in the order.

Forcesabers were Rakata weapons that channeled the power of the Dark Side. The Je’daii adopted them out of necessity, in order to greatly improve their ability to fight the Rakatan Infinite Empire. Some within the order embraced this weapon, whereas others feared it-an early harbinger of the division between Jedi and Sith (though the latter name would not arise for a long time): 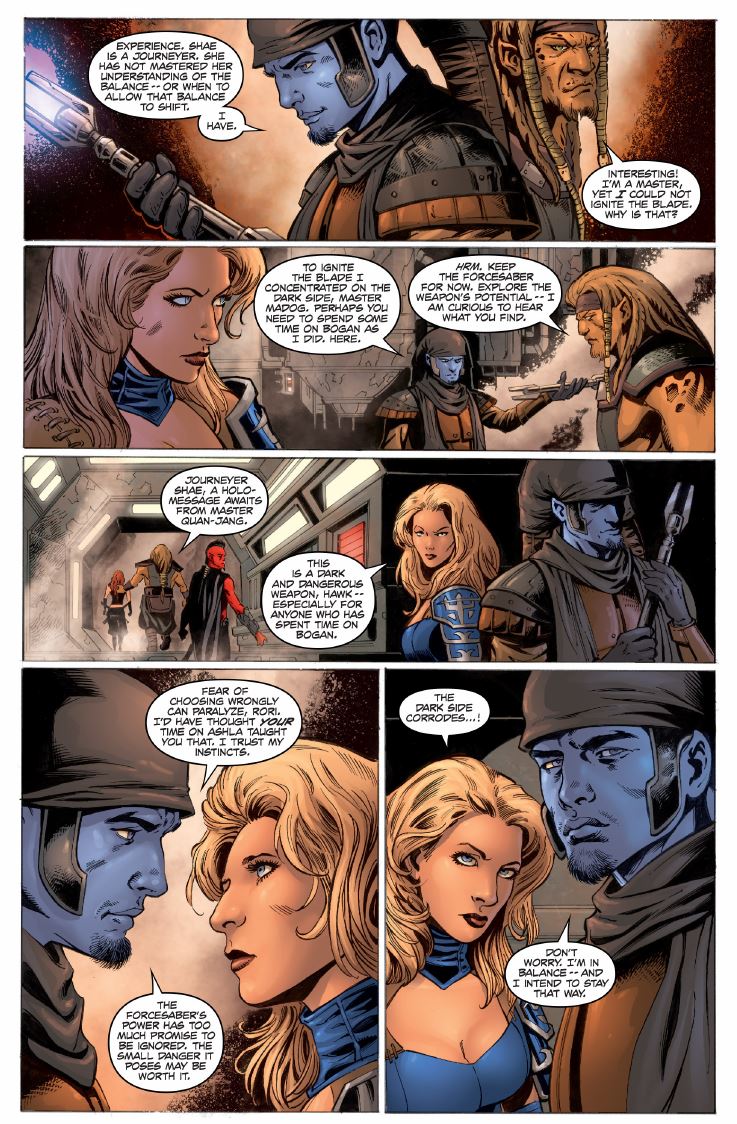 In order to use the weapon, one had to move dangerously close to being out of balance, allowing the dark side more control. This is evidenced, for example, by Xesh suggesting that it would be hard for a Je’daii to draw on enough negative emotions to use one: 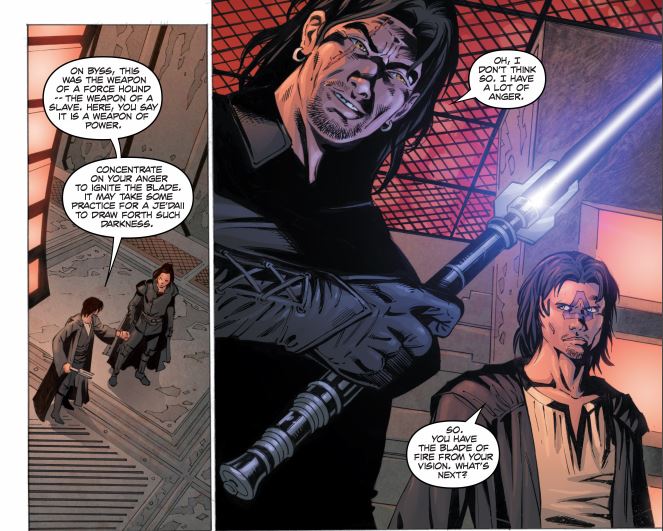 The seeds were definitely laid for a split between light and dark in the Order.

So basically, the Rakata invasion disrupted the fragile balance between light and dark on Tython. We know what prompted the split, but we don’t know the details of the actual conflict. In any case, the darksiders seem to have lost, whereas the light-siders carried on the name Je’daii (more or less). They then left and refounded the Order (now the Jedi Order):

The more proactive Ashla warriors left Tython for good, accompanying the offworlders home along a hyperroute soon erased by the Deep Core’s churning stars. These crusaders became the Jedi Knights, and established their headquarters on Ossus (at that time the most distant world known to the Republic).

The current Jedi Order is light side because it descends from the Ashla devotees who left Tython. The darksiders seem to have lost, and the adherents of the light side who stayed on Tython did not, it seems, carry on their traditions.

First of all, Leth is correct that the Je'daii believed in balance between the Light and Dark Sides.

The Je'daii Order was an ancient organization unified by its belief and observance of the Force on the planet Tython, in the galaxy's Deep Core. Focusing on maintaining a balance in the Force, a state at which Tython was itself hospitable, the Je'daii saw the Force as two aspects of a whole; the Ashla and the Bogan. They saw this duality in the Force represented in the night sky of Tython in the form of two natural satellites; one bathed in light, another shrouded in darkness. In keeping with their ideal balance, Je'daii who fell too far to either the light or darkness were exiled to one of the moons to meditate until they returned to balance. (Source)

This is what Wookieepedia says about the origin of the Light-only Jedi.

In the ensuing decade, the balance of the Je'daii Order was shattered. Two splinter groups emerged, one which held the Ashla as the main power of good in the universe, and another whose members found power only in the Bogan. In a tumultuous conflict known as the Force Wars, former allies were pitted against each other and all that the Je'daii Order had become was torn asunder.

In 25,783 BBY the war had raged for nearly a decade, leaving the planet a ruined waste. The light-siders, led by Je'daii Masters Rajivari, Garon Jard, Cala Brin and Ters Sendon, founded a new group known as the Jedi Order and deemed that they would only use their powers for the protection of the weak and disenfranchised. From this group, Master Rajivari broke away and formed a dissident group of dark siders. Building an army of dark side monstrosities, Rajivari and his followers seized the Temple of Kaleth and attempted to defeat the Jedi Order. Following the defeat of Rajivari's forces and other dissidents like him, the Je'daii Order was finished, the Jedi Order standing in its place. Having witnessed the destructive power of the dark side first hand with the ruination of their homeworld, a large group of Jedi set out from Tython to settle other worlds far from the Deep Core, eventually establishing a headquarters on the far-flung world Ossus. The Je'daii's successor group, the Jedi would ultimately go on to defend the galaxy for millennia to come.

This was revealed in Star Wars: The Old Republic.

The exact reason they initially separated isn't clear. The fact that this information was revealed soon before the end of the old E.U. is the likely reason it hasn't been further explored or referenced by subsequent works.

However, the Light and Dark Side followers have never really gotten along, so the schism isn't particularly surprising.

131
Why did the Jedi want to bring balance to the Force?
12
Did the deaths of Palpatine and Vader make the Jedi more powerful?
19
Sith using the light side of the Force?
6
Are there Light side powers and "Light Jedi"?
4
Why wouldn't the Jedi train Force users?
18
Does the term "Light Side" actually exist?
2
Are the Jedi and Sith "special" compared to other similar groups?