Where does the “Spidey” comic fit in Marvel's space-time?

Marvel Comics is presently (May 2016) publishing a comic titled "Spidey", which depicts a teen aged Peter Parker early in his superheroing career. The setting appears to be contemporary, in spite of Marvel's concurrent publication of the adventures of an adult Peter Parker / Spider-Man.

Has Marvel explained this inconsistency? Does Spidey take place in an alternate reality? Is it meant to be the primary Peter Parker's past, in spite of the apparently contemporary setting? 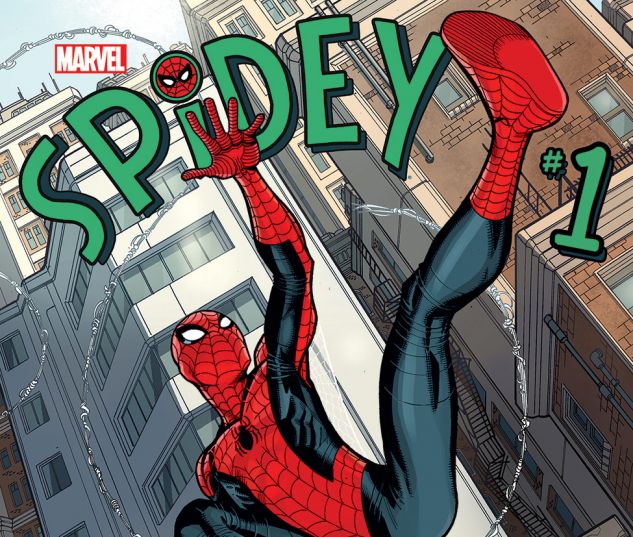 marvel spider-man continuity
Share
Improve this question
edited May 23 '16 at 14:57

The Spidey series is apparently both part of the 616 universe and contemporary, despite the continuity issues created by that decision.

Asked about a "Spidey" book teased at a retailer presentation during the convention, Director of Content and Character Development Sana Amanat disclosed that it's an all-ages series about Spider-Man in high school, written by Robbie Thompson.

"It's called 'Spidey,'" Thompson said. "It's an all-ages book. When Nick [Lowe] called me up about this, I was so, so excited. I think the tagline is, 'Before He was Amazing, He Was Spectacular.' This is Peter Parker as a teenager. They're all standalone stories. These are designed to be in the classic Marvel mold; every issue is a first issue. I think we all have this memory of Peter being in high school for like seven decades, but it actually wasn't that long. These are those stories." Thompson likened it to '90s series "Untold Tales of Spider-Man."

The fan asked if the series took place in the mainstream Marvel continuity. "I believe so," Amanat answered. Editor-in-Chief Axel Alonso said that Marvel has responded to a demand for more all-ages content, and called the series "entry-level" Spider-Man stories that are "for everybody." He also stressed the importance of the series being contemporary, not "creaky and cobweb-y."

Today, he’s the world’s greatest super hero. But long before he swung from rooftops as the Amazing Spider-Man, he was just a spider-powered teenager who knew that “with great power must also come great responsibility.” Today, Marvel is pleased to announce SPIDEY #1 – a brand-new ongoing series launching as part of All-New, All-Different Marvel! Follow the adventures of teenaged Peter Parker in a new series set within continuity from rising star writer Robbie Thompson (TV’s Supernatural, Silk) and blockbuster Marvel Young Gun artist Nick Bradshaw (Wolverine and the X-Men, Guardians of the Galaxy)!

In the end, try not to overthink it. Spiderman has aged less than 20 years in over 50 real-life ones, so time has always been weird for him.

From Marvel's own description of the "Spidey" series:

Think you know everything about Peter Parker’s early days? Think again. It’s action, adventure and a rip-roaring romp in classic Marvel style as SPIDEY swings onto shelves this winter! Featuring adventures from throughout the web-slinging wonder’s younger years, it’s a return to the days of overdue homework, not knowing how to talk to girls (or anybody, really) and just a plenty of danger. Witness some of Spidey’s earliest tangles with the likes of DOC OCK, SANDMAN and a host of other unexpected guests!

Not the answer you're looking for? Browse other questions tagged marvel spider-man continuity or ask your own question.

3
Where do the Adventure Time comics fit with the cartoon?
55
What does the Spider-man symbol on 1980's comic covers mean?
4
Marvel's Iron Man's Comic Connection with the Film
5
TV's Marvel's Agents of S.H.I.E.L.D. vs The Comic Books
4
Where does “Unearthed” fit in the Fringe timeline?
2
Which continuity does the 2015 Amazing Spider-Man comic take part in?
3
What are the essential comics in Marvel's “Civil War” comic event?
9
In which Spider-Man comic does a kid gets shot while trying to save Spidey?
6
Captain Marvel's (Carol Danver) Origin Story comic series?
9
Looking for a Spider-Man comic from the 1970s where a telepathic man-child controls a town, is defeated when Spidey “deafens” him?