The basic plot was that a hazardous mission to explore a distant planet was crewed with "freaks", people who had suffered accidents or had genetic abnormalities, and as a result were tougher and stronger than regular folk. The leader was a guy with no arms, whose face could light up after exposure to a dangerous chemical. Another guy had no legs, but massively strong arms. There was a fat woman who wore an acid filled suit to retard the constant growth of her flesh.

That's all I can remember about it as I read it 30 or so years ago, but it made a strong impression on me.

story-identification soft-sci-fi pulp
Share
Improve this question
edited May 23 '16 at 22:28

I suspect that this is Address: Centauri by F.L. Wallace, an expansion of his story "Accidental Flight" which first appeared in the magazine Galaxy Science Fiction in 1952. From the Wikipedia article:

The novel concerns people with incurable injuries and defects (biocompensators) who volunteer for the first interstellar flight.

As with most classic sci-fi, it's been released with a variety of covers, but here is one of them: 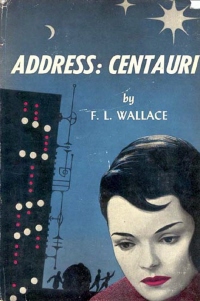 Not the answer you're looking for? Browse other questions tagged story-identification soft-sci-fi pulp or ask your own question.

5
Film about a dying Earth, so a crew of astronauts are sent to save human race in a distant planet
8
Graphic novel about a polluted planet and people who grow wheels on their feet
11
Four characters sent to explore space, and telepaths are gorgeous
5
Animated Series: Earth vanishes, two astronauts survive and explore space
4
Novel set on a distant planet, with creatures able to taste and smell through their feet upon the surface