Never fear I can in fact remember more about it than that! The cover was black and it had a silver snake eating its own tail on the cover. The book was about a boy who is hired by a company to travel (with a girl and another boy (the drummer)) to another world/alternative reality and there they discovered another girl who turned out to be his dead twin sister.

He was some hero or something and they found something out about the company they were hired by and at one point he was almost killed but got a scar next to his right (or maybe left) eye that made him or marked him as the seer? His twin gave him a bracelet shaped like a snake biting its own tail and that meant something important... The Snake was also the symbol/logo of the company.

In the end he went home and spoke to him mom about his twin and I remember it being the first book in a series.

From your description Just Searched google and look what I found.

For anyone looking for title its "PROPHECY OF THE SISTERS"

This can be your book.

An ancient prophecy divides two sisters-
One good...
One evil...
Who will prevail?
Twin sisters Lia and Alice Milthorpe have just become orphans. They have also become enemies. As they discover their roles in a prophecy that has turned generations of sisters against each other, the girls find themselves entangled in a mystery that involves a tattoo-like mark, their parents' deaths, a boy, a book, and a lifetime of secrets.
Lia and Alice don't know whom they can trust.
They just know they can't trust each other. 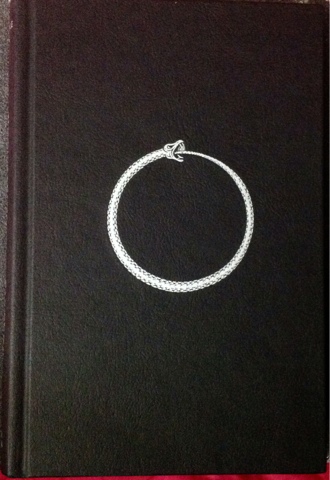 15
Looking for young adult book, possible from the last 10-15 years
7
Trying to identify a book that had something to do with a silver snake bracelet

15
Looking for young adult book, possible from the last 10-15 years
12
80s horror book with a man crouched and eating a leg on the cover?
7
Need help finding a Fantasy Book with a sword wielder and sight sharer
7
Trying to identify a book that had something to do with a silver snake bracelet
13
Movie about a couple doing calculations to open a door to another world
6
2000s (I think) YA Fantasy novel series with pendant or stone on cover
6
Children's sci fi book from '90s/early 2000s that had a cover with two kids, and a ringed planet in the background