When was Uhura Captain of the Enterprise?

Lt. Nyota Uhura was the communications officer on the original Enterprise in the first series of Star Trek, and went on to reprise her role in several subsequent films. However, an answer in this question states that she once also held the rank of Captain.

When did this happen, and under what circumstances? Futhermore, did it have any lasting impact?

I am aware that Uhura's presence as an officer on the Enterprise was already groundbreaking, given the social situation in the United States at the time.

Ep.4 of The Animated Series has Uhura taking command after all the male crew get seduced by the latest planet's ladies.

My understanding is that naval traditional would hold that during that time she was "Captain of the ship". But she didn't change her insignia or claim the rank of Captain.

As Valorum said, I do not believe this ever happened in canon. However, there is an unofficial miniseries in whic Uhura was at least a captain, though perhaps not of the Enterprise:

Star Trek: Of Gods and Men

This is a non-canon miniseries, but contains many of the actors from TOS, including, crucially, Nichelle Nichols. From a transcript:

"Captain Uhura. Welcome aboard. Do you like the ship?"

Captain Nyota Uhura has been serving as Director of Starfleet Linguistics, a post she finds extremely interesting, though she feels there may be something missing in her life.

Here's Uhura in her Captain's uniform: 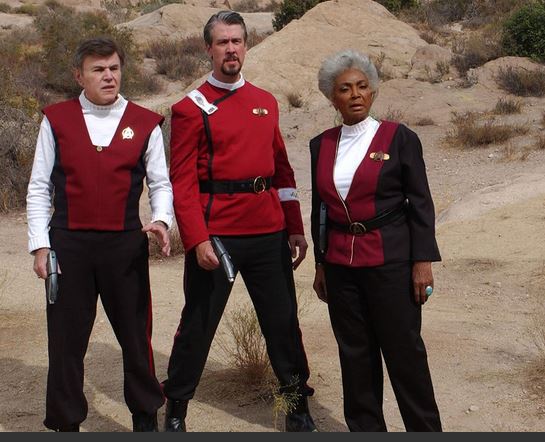 Uhura was once captain in the REGULAR series for a few seconds, because she was the highest ranked officer on the ship during that episode, so Kirk told her that she was captain, and she took his seat for a few seconds.

It's called The Lorelei Signal.

16
Captain Riker, of the Enterprise?

21
Was Gary Mitchell the First Officer on the Enterprise?
16
Captain Riker, of the Enterprise?
25
Why did the Enterprise - A have so many high ranking officers?
24
Did Kirk and Uhura actually kiss?
21
Why was the name 'Enterprise' chosen (out of universe)?
7
Where was Spock when the Enterprise B was launched?
13
Did Uhura ever show evidence of older memories after The Changeling?
20
Why did Captain Janeway feel that using the Doctor as an expendable messenger boy was more important than keeping him around to heal the crew?
2
What is Kirk referring to when he says "Uhura, notify the Discovery on subspace radio"?