How did Darth Vader know the rebel base was on Hoth?

In The Empire Strikes Back, Darth Vader looks at a picture of a shield generator on an ice planet and declares that's the rebel base. How could he know merely by looking at the picture from the probe? In the movie, an imperial officer says the message from the probe was fragmentary, so that might be further reason to distrust it.

It was clear from A New Hope he did not have clairvoyance enough to find the rebels' hidden fortress.

Was there something in the novelization that said he had additional knowledge of Hoth?

Edit: I am not looking for an answer that merely says "He used the Force." The use of the Force to sense people seems inconsistent in the movies. Vader didn't sense Luke when he was standing outside the Millennium Falcon right after it was pulled into the Death Star. He didn't sense Leia when he captured her ship at the start of A New Hope. Count Dooku didn't sense Kenobi when Kenobi was hiding on Geonosis. Yet other times, people sense Force users who are light years away.

I am looking more for something that says Vader had actual information.

“I think we’ve got something, sir,” Piett informed him. “The report is only a fragment from a probe droid in the Hoth system, but it’s the best lead we’ve had.”

Unimpressed, Ozzel snapped, “We have thousands of probe droids searching the galaxy. I want proof, not leads!” But Piett wasn’t finished. He added, “The visuals indicate life readings.”

“It could mean anything,” Ozzel said, growing impatient with Piett. “If we followed up every lead…”

“But sir,” Piett interrupted, “the Hoth system is supposed to be devoid of human forms.”

This serves as a strong sign that something untoward is going on. As Piett later says, it could be smugglers, but Darth Vader is pretty confident that it is Luke.

They have images of Rebel snowspeeders

Yes, sir,” Piett said slowly, choosing his words with caution. “We have visuals. The system is supposed to be devoid of human forms. . .” But Vader was no longer listening to the captain. His masked face turned toward an image beamed on one of the viewscreens—an image of a small squadron of Rebel snowspeeders streaking above the white fields.

—The Empire Strikes Back (Novelization)

From the script, as well:

Vader moves to a large screen showing an image of the Rebel snow base. Rebel speeders can be seen approaching the base in the distance.

VADER: You found something?

It's unclear whether the snowspeeders have any markings or design elements indicating their Rebel affiliation, but they may. Alternately, the fact that a full squadron of speeders is present might tend to rule out smugglers, who might tend to have fewer members.

In that vein, the size of the base might be a clue as well that there is something more than smuggling going on. Also, the picture from the probe droid shows the power/shield generators quite clearly.

The monitor displayed the transmitted image of a snow-base power generator.

These may well have been of the sort suitable only for a military installation, as opposed to a smuggler based unused to combat. Certainly if they could be recognized as shield generators, it would seem likely that the occupants of the base were more than mere smugglers.

True, Darth Vader's skill in the Force was not enough to simply pull the location of the base out of thin air.

ADMIRAL MOTTI: Don't try to frighten us with your sorcerer's ways, Lord Vader. Your sad devotion to that ancient religion has not helped you conjure up the stolen data tapes, or given you clairvoyance enough to find the rebels' hidden fort-....

But it is possible that, with additional information (such as a picture of the Rebel base), the Force could provide him with sufficient intuition to know whether it was the right place or not.

“That’s it,” Vader said with conviction. “The Rebels are there.”

Admiral Ozzel saw nothing on the monitor that specifically indicated a Rebel presence, and he did not believe in expending time and energy on a mere hunch.

This is also the impression conveyed by the The Empire Strikes Back: So You Want to Be a Jedi?, in which Vader can "sense" the presence of Luke and the Rebels, as mentioned in another answer.

Of course, Luke Skywalker was also at that base (which he was not in the previous case), and Force users have been shown to be able to sense the Force in others, albeit inconsistently.

VADER: That is the system. And I'm sure Skywalker is with them. Set your course for the Hoth system. General Veers, prepare you men.

This serves as further indication that it was Luke himself that Vader sensed.

Vader sensed it (with the Force). He also noted the presence of another powerful Force user; Luke Skywalker.

“It is they,” he intones. “The rebels are there.”
“Lord Vader,” objects Admiral Ozzel, distinctly displeased at being contradicted, “it could be anything. Smugglers, a small settlement…”
“It is the rebel base. I can sense it. And Skywalker is with them.”
“Lord Vader…” Admiral Ozzel does not put much stock in Vader’s “sense,” nor in the hocus-pocus of “the Force” and “the dark side.” Admiral Ozzel is a sensible man. A man of science and warfare. - The Empire Strikes Back: So You Want to Be a Jedi? 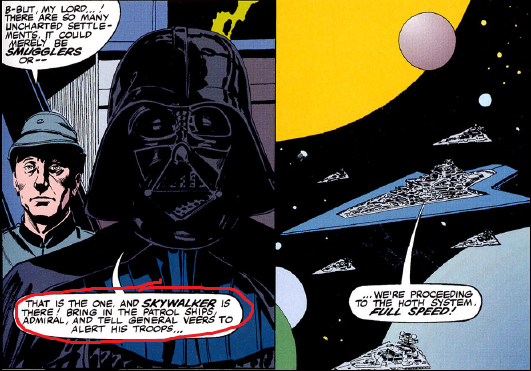 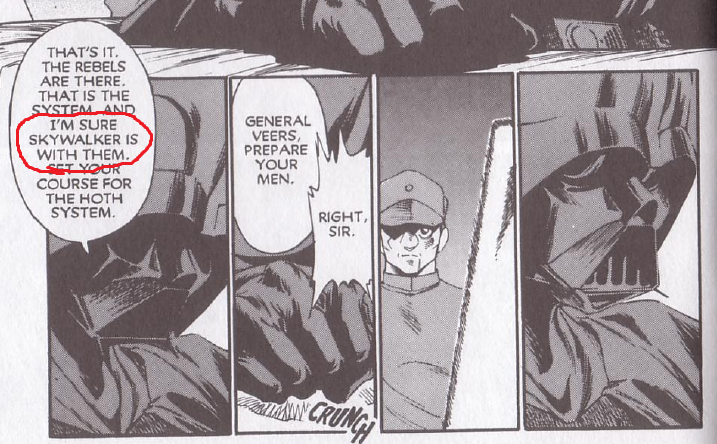 In the Timophy Zahn novel, Choices of One, there was this scene that took place between Grand Admiral Thrawn and Darth Vader:

Thrawn lowered the datapad. “Here’s what they took, in order of loading. Cold-weather equipment and cold-weather modification kits. Critical replacement parts for a SURO-10 power generator, a KDY DSS-02 shield generator, and some Atgar P-tower laser cannon. They probably also have at least one Golan Arms DF.9 anti-infantry cannon, along with several combat-modified T-47 airspeeders and the equipment to modify more.” He paused expectantly.

For a long moment Vader just stood there, facing Thrawn, his stance giving no clue as to what was going on inside that black armor. Car’das felt himself tensing …

“A cold world,” Vader said, his voice almost shocking in its quiet calmness. Not angry, not simmering, but merely thoughtful. “Uninhabited, or nearly so. No useful resources.”

Thrawn inclined his head. “I agree, my lord,” he said.

“Wait a minute,” Ferrouz said, sounding confused. “I understand the cold part. But how do you know it’s uninhabited.”

“The SURO and DSS-02 are designed to operate in the open,” Vader said, his faceplate still turned to Thrawn. “On a cold world, with no cover available, they would quickly be spotted anywhere except on an uninhabited world. And any world with appreciable resources would hardly remain uninhabited.”

The new canon book Star Wars Battlefront: Twilight Company shows that it was possible Vader was also tracking an Imperial defector who was assisting Rebellion leadership.

(although, it could be the hubris of the character that initially led her to think he was after her, when in fact he was not in the least bit interested in her specifically)

"You found me," a voice said. "Congratulations." It was a woman's voice, in a strange, overly enunciated accent. Challis. Did you follow my shuttle to Hoth? Or did you pick up my trail later? Not that it matters, really..." She was standing a short distance in front of Vader...

The idea that the higher the level of Force mastery, the clearer the sense of presence is used again in Return of the Jedi: Luke's presence endangers the whole rebel mission and in fact was key in the Emperor entrapping them in the final battle. Luke is a master himself, yet still an apprentice in comparison to the Emperor, who is a master of evil plans. He knows their whole plan just using his sense. Luke is learning and has just grown strong enough to sense that Vader was on Endor at the same time with them. This also implies that the Dark Side of the Force is stronger in sensing... like a predator sensing its prey.

50
How did Kendal "as clumsy as he is stupid" Ozzel attain the rank of admiral?
5
Why is the shield generator on Hoth not underground?
12
How did Vader know the Tantive IV went to Tatooine at the end of Rogue One?

0
Did JKR intend any parallels between Wormtail's sacrificed/artificial hand and Darth Vader?
25
How did the Emperor punish Darth Vader?
25
Could Vader really have crushed the Rebels on Hoth?
30
After Hoth, why did Vader pursue the Millennium Falcon instead of Luke's X-Wing?
28
Did Yoda definitely know who the other hope was?
31
What was Darth Vader's official role (or rank) in the Empire?
103
Why was Darth Vader so careless?
6
How did Darth Vader trace the rebel spies to Princess Leia?
4
Why can't Tyranus/Dooku sense Kenobi in Geonosis?