Fantasy Book Series; Boy trained by wizard in a tower

I am looking for a fantasy book:

What I vaguely recall is:

A boy is sick with the root cause being magic within himself. He is semi-cured by someone and is told he needs to train with the wizards in the towers throughout the land. He finally decides to leave his family and train at the towers. I am pretty sure each tower in the land held different responsibilities, and someone or something was tearing down the towers in the lands.

The book was in English. I was thinking it was written in the 80's or 90's. This book was picked from old books people donated to the military (so it certainly wasn't "new"). This was a full book, not a short story, and I recall that it was part of a series: at least three books, probably more. The cover had some orange tint to it, and pictured a castle/tower in the background to the left side, while in the foreground there was a person riding a horse along a winding trail to the tower/castle.

Any help would be appreciated. This is not the Seventh Tower Series.

story-identification magic wizards
Share
Improve this question
edited May 26, 2016 at 19:17

I've been looking for the same book it's called Master of the Five Magics by Lyndon Hardy! 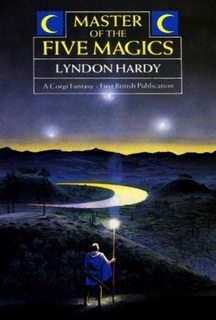 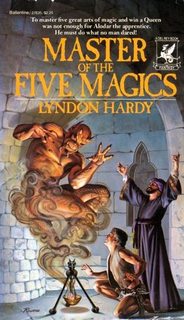 To master five greats arts of magic and win a queen was not enough for Alodar the apprentice. He must do what no man dared!

Alodar was a mere apprentice thaumaturge, learning the least of the five great arts of magic. As such, he had no right to aspire to the hand of the fair lady, Queen Vendora, not even when he saved her during the demon-inspired siege of her frontier castle. But aspire he did.

His quest forced him from one exacting branch of magic to another, with the rewards he earned always going to others. Finally, only the branch of wizardry remained - the great, almost lost art of controlling demons.

It was then he learned of the ancient plot behind his rise - and faced the greatest danger any man could dare!

It is the first book of a trilogy.

This description really reminds me of the Circle of Magic series by James D. McDonald and Debra Doyle. Check it out.

I don't think this has any of the sickness you mention, but there was definitely mention of a number of towers/castles of power all along.

PS. Another series which comes to mind is the Earthsea Trilogy by Ursula K Le Guin.

6
Is this scene from a Deryni novel?
23
Story with a heat protectant salve that's too thick
13
Fantasy novel about kid who controls magic through coin changer device
5
Trying to find a childhood book where demons are summoned via fire and will power and new worlds can be created as offshoots
10
Book (part of a trilogy) where a powerful demon makes a computer out of lesser demons
4
Bus conductor's change maker used for magic?

9
Fantasy series: auburn-haired boy whose mother/grandmother goes missing, flying airships
10
Trying to remember the name of a series/book involving time
6
Fantasy book with an adopted son called Boy
7
Help: Fantasy magic book series male genius similar to Name of the Wind
10
Fantasy book from 2000s girl with amnesia, hideously ugly face wears mask works as kitchen maid
6
90s YA fantasy series where a warrior meets a sorceress and they travel together
7
Book series - Boy finds gem and is transported to a fantasy world
15
Book series about a boy who becomes a wizard's apprentice and can see magical auras