How old is Aunt May? 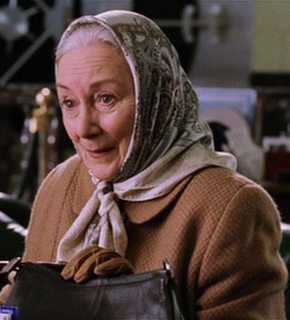 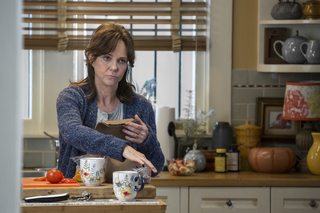 Most recently we have had the delight of Marisa Tomei in "Captain America: Civil War" 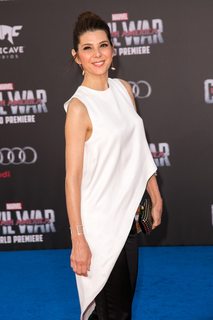 For comparison this what she looks like in the original comic... 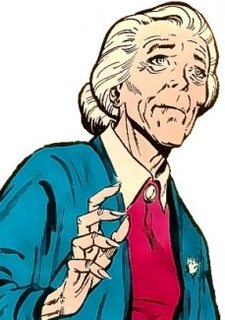 It seems that Aunt May keeps getting younger in the cinematic realm. Peter Parker has been consistently been depicted as a high school student (at least in the first film in a series). So while the Aunt of a child in high-school can be in almost any age range and I understand these properties are all set in different continuities...

What is Marvel's official stance on the age of Aunt May?

As you said, all of these incarnations (and several more, like the versions from the Ultimate universe or animated shows , are all officially licensed, and thus are "Marvel's official stance".

For comics, more so than other media, there is no one canonical continuity. Even within a single continuity, like Marvel's main comic universe, things change and shift over time, with different writers and artists. The same thing happens with the floating timeline used by comics - did the Thing fight in WWII or in Vietnam? Did Tony Stark build his first suit of armor in 1950's Korea, 1970's Vietnam or post-9/11 Afghanistan? All are true, in their individual contexts.

All of these Auny Mays are part of the large, vague, amorphous blob that is the Spider-Man franchise.

As noted, both Aunt May and Uncle Ben have appeared to be old enough to be Peter's grandparents. Consistently through Spider-Man's first few decades, May definitely appeared to be a senior citizen.

Even relatively recently, when she married JJJ's dad, no one seemed to think there was enough of an age difference to squawk about. And he was a grandfather; John Jameson, the younger JJJ's son, is probably older than Peter (as he's an astronaut while Peter's in high school).

All that said, mostly I wanted to add in information from a semi-in-universe source. Yes, that one.

Marvel published a "teen romance" mini-series, TROUBLE, in 2003. A series involving characters named May and Mary (two friends) and Ben and Richard (older and younger brother - but still teens).

If you weren't aware, Peter's parents names are Richard and Mary.

Without getting into the detail (really, you'd rather I didn't), this would establish that Ben and May were roughly the same age as Richard and Mary - if it was actually consider MU canon. To the best of my knowledge, it is not (and is unlikely to ever be).

And, from what we do know about Peter's parents that's canon (mostly from AMAZING SPIDER-MAN ANNUAL #5, from the 1960s), Richard and Mary were active agents when they died, and (in all likelihood) were probably no older than their early 40s, tops.

It does seem likely that May shouldn't have been quite as old as she's been made out to be, over the years

Marvel's "modern age" (meaning everything that happened after the origin of the Fantastic Four) operates on a sliding timescale. Meaning it moves forward. To simplify what this means is that a comic book published today happened "today", however next week on new comic day a certain amount of time has (roughly) passed. That said, the Marvel Universe basically operates on a 4:1 ratio. Meaning that for every four years of publications (From November year 1 to October year 4) equals one year of Marvel time. There are obviously irregularities, but to keep on point that is a means of measuring time. All context in term of what happened when and where and how it applies to human history should be considered "topical". Example, you shouldn't think of Tony Stark having made his armor during Vietnam, or Desert Storm literally, but that he was involved in a munitions test in an unstable region. It becomes vague.

That said, characters rough ages have been made. Example, during Civil War, Peter Parker has stated that he got his powers when he was fifteen years old. Based on the sliding timescale we can figure he is roughly in his late 20s very early 30s now, because 15 years of Marvel Time has passed now (the last 4:1 cycle started in November 2017)

That said, in Marvel Knights Spider-Man published in 2004-2005, there was a storyline where Aunt May was kidnapped. This is the first time her rough age was mentioned. At that time, it is stated multiple times that she was in her early 70s. So in the comics Aunt May will still won't be hitting her mid to late 70s until publications that come out in 2029.

A dynamite explanation of how the Marvel timeline works can be found at marvel.wikia.com/wiki/Glossary:Sliding Timescale

Not the answer you're looking for? Browse other questions tagged spider-man marvel age or ask your own question.

7
In "One More Day," did Spider-Man really have to make a deal with Mephisto?
4
How is Spider-Man's identity a mystery when Peter is seen performing unusual feats?
23
How many Marvel Earths (Universes) are there?
75
Why did Peter Parker work as a poor photographer given that he was a top science student who could earn much more in Silicon Valley?
2
Did the Radioactive Spider Bite Give Earth-616 Peter Parker Muscle Definition, Like in the 2002 Raimi Trilogy?
7
How old is this returning character in Spider-Man: No Way Home?
10
Why did the Sinister Six capture Aunt May and Betty Brant?