How is Qresh capable of supporting human life?

Season one of the series Killjoys takes place primarily in 'the quad' two known moons (Westerly and Leith) both of which have human populations and a third moon thought to be barren and lifeless (Arkyn), all three of which orbit a fourth planet Qresh, where the aristocracy of the quad lives.

Assuming Westerly, Leith (and Arkyn, which turns out not to be as uninhabited as everyone thinks) are roughly Earth-sized stellar bodies- if they orbit Qresh, shouldn't gravity on Qresh be a hundred times stronger, if not more? How can humans live on the planet without being squashed flat?

The moons may not be Earth-sized, or have an Earth-like density

As it happens, someone has looked into this exact question (among many others). All quotes are from that article unless otherwise noted.

The article notes that the biggest requirement, of course, is that the planets must be liveable:

As a matter of fact, the most limiting canon information regarding the size of Qresh and its moons is that they are all of the appropriate mass-to-radius size to support reasonably-comfortable human existence - and that’s one hell of a requirement.

They use some astrophysics programs to determine suitable m and r for the various bodies. They need to satisfy several requirements: gravity within human tolerance, stable orbits, and stable (and solid) bodies. This may not be a unique determination, but as long as such values exist it demonstrates that the Qresh system is feasible.

In the case of the astrophysics fandom, this means online simulators. We combined the mass/r ratio constants with a thorough exploration of the simulations to figure out what combination of masses, r values and orbits could be stable. The results were one set of sizes (mass and r, the combination of which determines density and g) and two possible sets of orbits.

Basically, one should not assume that the moons are Earth-sized bodies. The density of the moons can be very different from that of Earth (or Qresh), since they could be made of relatively exotic materials.

Sizes. As mentioned in the Goldilocks’ planet paragraph above, Qresh is approximately twice as wide as Earth and 4 heavier to satisfy both density and gravity requirements. Based on the simulation, it seems like likely dimensions of Qresh are twice times Earth’s width and 4.5 times its mass, yielding half the density and a g 12% higher (that is, a person weighing 50kg on Earth would weigh 56kg on Qresh). The likely dimensions for the three moons are as follows:

This gives each planet a gravitational constant (relative to Earth g), of:

According to this article, it is possible that humans could adapt to gravity over twice that of Earth, so 1.12 times should not make life unliveable (though it might make it uncomfortable). As for a somewhat lower gravity, humans have spent over a year in zero-g environments without dying, so I suspect a 10% lower gravity would be very survivable.

Here are the relative sizes of the moons and planet, according to their calculations:

The moons may not even have spherical orbits around Qresh

They note that of course, in this case, the center of gravity will differ appreciably from the center of Qresh, and the orbits of some of the moons will not be centered around Qresh. There are apparently two classes of orbit, one of which is shown below: 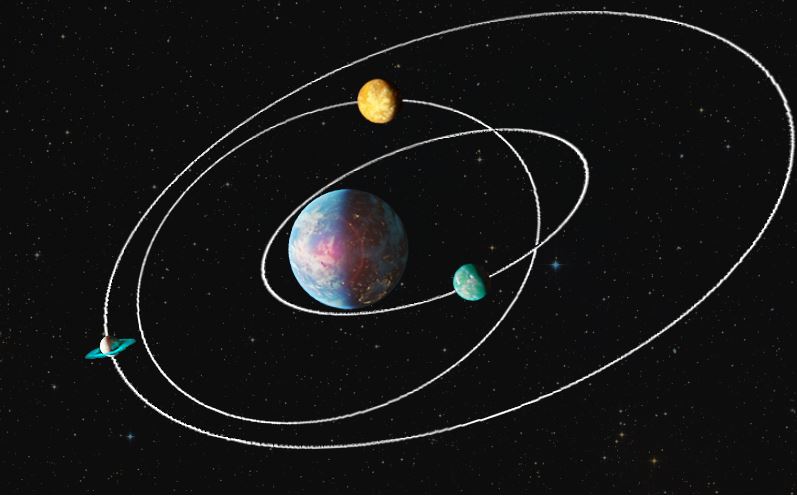 All that said, of course, the show (being filmed on Earth), presumably doesn't depict these somewhat different gravities as accurately as possible.

Not the answer you're looking for? Browse other questions tagged planets gravity killjoys or ask your own question.

23
How deep was Coruscant's surface buried?
5
How does gravity work on the Icarus?
5
Looking for a 1980's children's book about life on other planets
10
Short story about exobiology during human exploration of an alien planet
19
How do all the planets in the Star Wars universe contain breathable atmosphere and Earth gravity?
2
How do generations work, in Westerly?
0
How old was Big Joe when he became a level 5 killjoy?
7
In The Expanse, how does rotating Eros create gravity?
6
Short story about humans landing on a planet met with human-like aliens