What was the fate of the disbanded former Jedi order members after Order 66 executed?

The facts are that:

From the prequel trilogy, we know that when a Jedi gets emotionally close to another person then he/she is dismissed from the Jedi Order. Anakin was afraid this would happen if anyone found out about him and Padme.

As far as I can remember (though I seemed unable to locate my source again) there has been occasions that people (male and female) have been ejected from the Jedi Order because they became too emotionally close with other people and they wanted have a normal life, or even get married. These people though, even though they were removed from the Jedi Order, they didn't lose the powers or skills obtained over years of training.

And the question is:

Why didn't these former Jedi Order show up and help in the fight against the Empire after the Order 66 was executed? Why didn't Yoda or Obi Wan try to contact them after they were rescued by senator Organa? Do we know (from canon or Legends) what their fate was after the Jedi massacre?

Number of Jedi after Order 66? is asking about Jedi who were still part of the Jedi Order at the time Order 66 was activated. I am asking about the former Jedi that were no longer part of the Order.

Well, in Canon, there is only one Light-sider we know so far who left the Jedi Order, Ahsoka Tano. She left on her own accord, though.

Because I am no longer a Jedi. It was my choice, I left the Order. (Shroud of Darkness)

I am no Jedi. (Twilight of the Apprentice)

We don't yet know what she was doing when Order 66 was first enacted, however we do know some of what happened after that.

Firstly, in Star Wars: Rebels, Yoda did contact her, to some extent, in the episode Shroud of Darkness. Kenobi was busy looking after Luke at the time, so he wouldn't have sought her out.

We don't know her final fate, but we do know that the Empire and its Inquisitors are Chaos-bent on capturing or killing her. 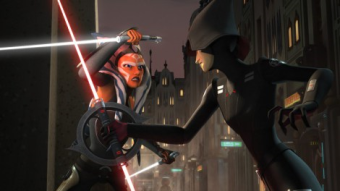 The same is likely true for all non-Empired alligned Force-users, ex-Jedi or otherwise, as we see the Inquisitors kidnapping force-sensitive babies for unknown purposes.

Their fate is that they were hunted down one by one. We have seen this through Rebels as one former Padawan who left the order before order 66 was executed was still hunted down. Not because she was a rebel but because the empire despite her no longer being a member of the order saw her still as a jedi (indicated through several instaces of Darth Vader speaking about her).

Thus one can subsume that this is the same fate for EVERY former jedi. The Sith still view them as jedi and thus possible threats that need to be converted if useful (inquisitors) or outright destroyed.

I will attempt to answer your question using Legends. In Legends we learn that when Order 66 was enacted, the entire jedi council was wiped out, except for Obi-Wan, Yoda, and Shaak Ti. Shaak Ti took refuge on Felucia and was eventually hunted down and killed by Darth Vader's apprentice, Galen Marek. This was shown in the now non-canon game Force Unleashed. During Order 66, former jedi council member Depa Bilahba is unconcious in the medical wing, and it is implied that she is killed. The fates of Eeth Koth and Coleman Kcaj are not shown, though their lack of future appearances suggests their demise. All other council members were wiped out. It's worth noting that Shaak Ti was training an army of felucians and training an apprentice (Maris Brood) before her death.

Not the answer you're looking for? Browse other questions tagged star-wars jedi order-66 or ask your own question.

28
Number of Jedi after Order 66?
19
What happens to Jedi expelled from the order?

48
Why didn't the Jedi use Order 65?
6
Why didn't Yoda & Obi-Wan stay around to help rebuild the Jedi Order?
6
When did Ahsoka follow the ways of the Force/Jedi after her departure from the order?
20
What punishment would Anakin have faced if the Jedi Council had found out he slaughtered the village of Sand People?
8
Did Anakin want kids?
2
If there is no Jedi order, will the number of force sensitive increase significantly?
19
What happens to Jedi expelled from the order?
8
How long after Ahsoka left the Jedi order did Order 66 happen?