I read a book God knows how long ago, can't remember the name or author but would like to trace it.

A man is on a planet other than earth where the society is based on mental power and the ability to control others with your mind.

Our hero has no ability to control others but locals are labeled as "fours" or "sixes" or "eights" depending on how many others they are able to control. The higher their mental ability, the higher their position in society.

The highest-rated people are "tens", I think, but the bad guy is, of course closer to a 12.

There is an element of farming and people working in fields where the lowest people, the twos and ones and nulls spend much of their time.

Does this ring a bell with anyone? 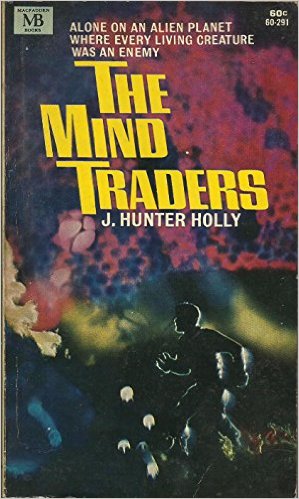 This Goodreads discussion suggests that this is The Mind Traders, by Joan Carol Hunter Holly.

The original poster mentioned a book very similar to that described in this question:

Another user remembered what was apparently the same book;

The second user later identifies The Mind Traders as the right title:

The Mind Traders by Joan Hunter Holly! Found it by being stubborn with Google search.

So, I guess you can call this one "solved?", if this IS the one you were remembering.

The first user later decides that this is the book that they were looking for.

A description of this book:

A place of crawling spiders and poisonous snakes where nightmares came true.. that was "The Black" where men were punished for challenging minds more powerful than their own. The detective from Earth feared The Black more than any torture his own planet could conceive. But he had to uncover the sinister plot that threatened Earth and all its people.

So it is certainly set on a planet other than Earth.

An Amazon review says something similar:

A human detective hunts a murderer on a planet with telepathic natives.

I obtained a print copy of The Mind Traders, and it seems to match both the book in quote #2 and perhaps the one described in this question, but not the book described in quote #1 (i.e. the main character was not low-ranked, but rather from Earth, and thus lacks powers altogether).

17
Book about people learning to teleport from cosmic noise
3
Religious film about mind control
9
Novel about heavy water and mind control
19
Trying to remember the title of a fantasy teenage aimed novel I read in the mid-1990s
8
Trying to identify an old novel about an artist with only one year left to visit new worlds
11
Short story about a man visiting a community for the deaf. Ends with them ascending to a higher plane of existence
5
SF Novel About Mind Control Device