What short story features a programmer visiting a world of magic who learns to hack it?

I was over on worldbuilding.se and found two intriguing comments on this question.

I read one short story where an Earth programmer ended up pulled into a universe with Magic. He sucked at it on the macro scale everyone else used, but figured out the mechanics of it and started to hack with it. First thing he did, of course, was port his favorite text editor to it. :-) – T.E.D.

Wish I remembered. I read it out of the Baen Free Library many years ago. – T.E.D.

What story does this describe?

This appears to be Wizard's Bane, by Rick Cook. It seems that neither it nor any other novel of Cook's are currently available in the Baen Free Library, but Baen still sells ebooks of the novel, as well as its four sequels, and you can read sample chapters on the Baen website.

As noted in the comments, Cook has been unable to continue the series due to his health. The sixth book, The Wizardry Capitalized, remains unfinished , but Cook released it freely to read online. 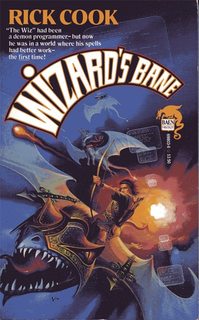 ...one of their most powerful members cast a spell to bring forth a mighty wizard to aid their cause. What the spell delivered was master hacker Walter "Wiz" Zumwalt. The wizard who cast the spell was dead and nobody— not the elves, not the dwarves, not even the dragons—could figure out what the shanghaied computer nerd was good for.

But spells are a lot like computer programs, and, in spite of the Wiz's unprepossessing appearance, he was going to defeat the all-powerful Black League, win the love of a beautiful red-haired witch, and prove that when it comes to spells and sorcery, nobody but nobody can beat a Silicon Valley computer geek!

10
Short Story-Experiment to hack metabolism via implant, patient escapes using keyboard to hack himself
4
What short story features an alien blob in bed and a guy who became its lover?
11
Story with a boy who has to conjure apples, and learns magic with the Socratic method?
13
Identify a story about a teen boy who learns to use magic with his lizard companion
6
Strange Short Story About A Programmer Who Programs all The Angels
8
Story about a mixed race user who learns to use magic