Are the Weeping Angels Timelords 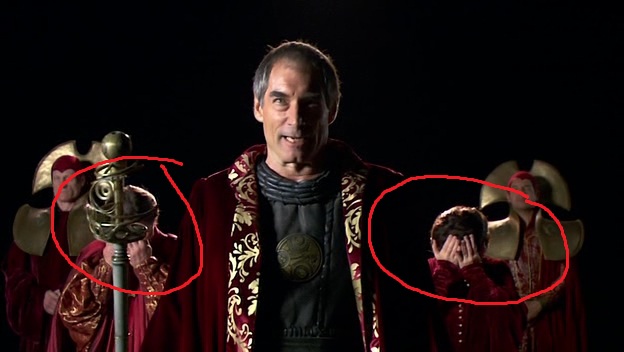 The Doctor describes them as being "the only psychopaths in the universe to kill you nicely," and say that they evolved from the beginning of the universe. However, these exact Timelords are sent back to the time-lock at the end of the very same movie. So, are these two Timelords the progenitors of the Weeping Angels? Is this a common punishment among Timelords and thus OTHER older Timelords are the original Angels, or are they from somewhere else entirely?

The exact line is:

The vote is taken. Only two stand against – and will stand as monument to their shame like the Weeping Angels of old!

The word "like" here (missing from the version in the description), is key - the President isn't introducing these two as 'weeping angels', he is comparing them to something already known.

Given that the President knows of the Weeping Angels, the only way for these two to be the progenitors of the Angels would be if a time loop was involved. That's possible in Who, of course, but we have no evidence of one.

The Angels were only introduced in the 10th Doctor episode "Blink", and the "End of Time" scene is the only canon that connects the two. The only other connection between the races is that they both manipulate time in some way, and there are many differences.

Although the Doctor does lie, and doesn't know everything, he states (in "Blink"):

Lonely assassins, they were called. No-one knows where they came from. They're as old as the universe, or very nearly.

(Again, with a time loop, it's possible that the Doctor doesn't yet know the origin, but there's no evidence to suggest one).

What the Doctor stated - "no-one knows where they came from" - is true out-of-universe as well, at least for now, and excluding the show creators. Out-of-universe, the Angels were a creation of Steven Moffat, but "End of Time" was a Russell T. Davies episode; it's unlikely that RTD would reveal (or hint at) the origin of Moffat's creatures.

Way I see it, Rule 1: The Doctor lies. It's entirely possible that the Time Lords, once shamed, were turned to Angels, because of one simple reason. The Time Lords were a**holes. I mean, think about it; Weeping Angels are quantum locked. If someone looks at them, they cease to exist. What race would come up with something like that other than the Time Lords? What better way to shame someone: "You can wander around for all eternity, we don't care, but the second any living creature sees you, you will literally cease to exist."

The Weeping Angels are odd. They aren't all angels. They are actually any statue (as seen with the Cherubs and the Statue of Liberty.) My Theory is that it's a sort of virus that affects all the statues, taking the form of a Weeping Angel at first. I would bet it is a creation of the Time Vortex itself. It would explain why no one knows where they are from. Timelords can only gaze into it as an initiation, some go mad, while others burn up while looking in. Seeing as it feeds on time energy, and no one can actually explore it, it might make sense like this.

The Master seemed to disappear with the Gallifrayans at the end of the episode being discussed. Consider appetite. The Master, at the end, is insatiably hungry. So are the angels, but they feast on time energy. I would argue, then that a voracious, pitiless Time Lord, i.e. The Master, is a much more likely source for this race of beings. Remember the taunting behaviour of Angel Bob in "The Time of the Angels" (4th episode, series 5); very like The Master. Just a thought.

I believe if they really wanted to punish someone, they would. Regardless of how it would change the universe. I mean, look what they did to The Master. They needed him so they could break free of the time lock for the time war, and they brought Gallifrey with them, and The Doctor referred to it as basically bringing hell to earth. So it could be plausible that they would do anything to maintain order within their race, however they see fit.

I'd like to point out that it is very possible that the Weeping Angels were constructs of the Timelords or an offshoot of them; perhaps they had turned some of their most elite soldiers into Angels as assassins to keep time on the right path, like sending them back to assassinate rogue Timelords and other meddlers with time's wibbly-wobblyness.

Not the answer you're looking for? Browse other questions tagged doctor-who time-lord weeping-angels or ask your own question.