How can Tony Stark keep his head up while flying

As I mentioned at title, I wonder how he is able to keep his head up while flying ? To be exact we are using our head parallel to ground most of the time while our body is perpendicular to ground but when tony stark is flying it is not the case, both his body and his head are parallel to ground which is very hard for a person to do, would not it cause a lot of pain in the neck ?

As often happens when there's no explicit answer from the producers, there are a few different possibilities.

This article explores some of the science of a flight suit such as the Iron Man suit, and notes that there would almost certainly be a system to keep the person in it in a fixed position.

The suit is likely locking Tony's legs into the appropriate position during flight. Tony's legs need to be rigid and directly behind his torso, where most of his weight is, in order to prevent him from spinning like a pinwheel instead of flying straight ahead. Leave it to Jarvis to make adjustments from there.

Similarly, it is possible that his head is locked into place during flight, meaning that, at the least, he doesn't have to employ any effort to tilt his head like that.

Another, possibly more intriguing possibility, is that he doesn't actually have his head locked into position like that. As seen in this question/answer, the scenes seem to indicate that some or all of what he's seeing is just project displays inside the helmet. Thus, he could be relaxing face-down into a pillowed headrest while the armor's head is tilted up with the view from the cameras.

The image you linked seems to indicate that Tony's helmet is at a 90 degree angle to the body: 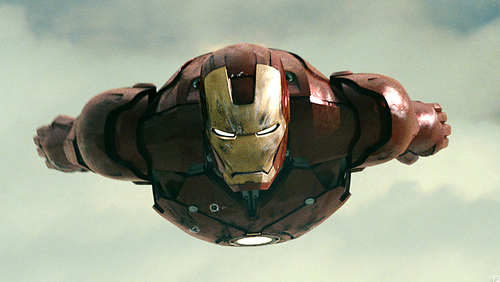 But other angles suggest that his torso is arced, meaning the head's at a less steep angle: 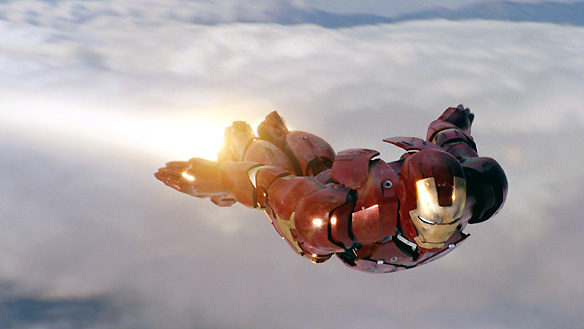 This further suggests bracing (since a bowed position like that would be uncomfortable to hold) as well as reducing the angle.

33
How does Tony Stark move his head inside the helmet?