I started wondering this after the extremely gratuitous slo-mo pearls in Batman vs Superman, but forgot to google it after leaving the theater. Then I mentioned it in chat tonight when I saw the same thing happen in Batman (1989), and Wad found several more examples, so it's probably worth asking:

Does Martha Wayne always wear a pearl necklace when she gets killed, and does that necklace always fall apart so that we see individual pearls falling to the ground? Obviously, any version of Batman's parents is acceptable, no matter how obscure.

No. There are multiple versions of the death scene where that doesn't happen.

The original comic version doesn't have that element. 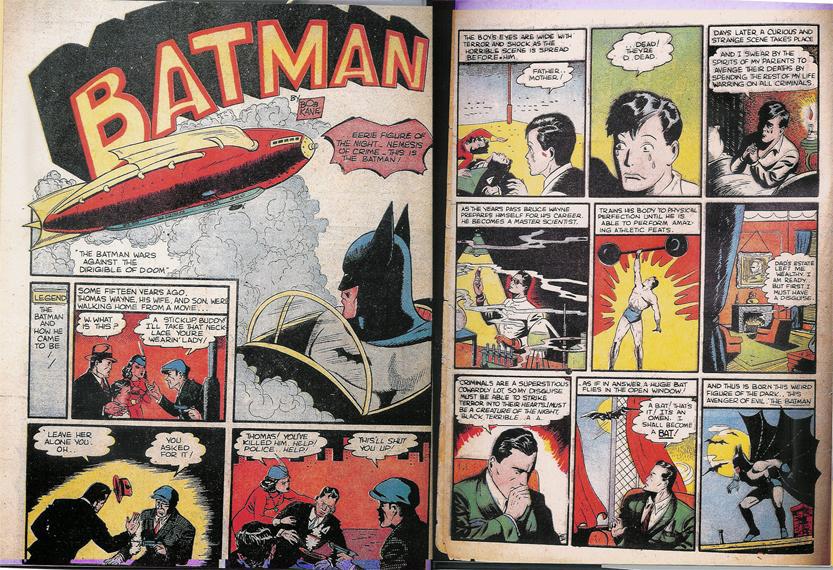 Nor does Batman: The Brave and the Bold.

The Super Friends version is ambiguous, but there don't appear to be any pearls. (Watch the lower left corner)

Batman: Gotham Knight also doesn't seem to feature any pearls, but it's very short and it's hard to tell.

The Batman shows that the necklace wasn't broken in the fight.

Justice League: The Flashpoint Paradox has her wearing pearls, but they don't break. However, it's an alternate dimension, in-universe.

In addition to the examples others have pointed out, this article from Comic Book Resources says the detail of Martha Wayne wearing a pearl necklace that broke apart when she was shot originated in Frank Miller's influential comic miniseries The Dark Knight Returns (1986), so it wouldn't have appeared in any depictions of Martha Wayne's death before that:

Another massive impact of "The Dark Knight Returns" was Miller's depiction of the death of Thomas and Martha Wayne. Martha's pearl necklace breaking and the pearls falling to the ground as she is murdered has become one of the most iconic visual images in Batman's history, and it all started in an alternate-reality story.

The comment "it all started in an alternate-reality story" refers to the fact that The Dark Knight Returns was an Elseworlds title, the publication imprint for DC stories that take place in alternate versions of the DC universe from the main continuity (The Dark Knight Returns featured an older Bruce Wayne who was 'retired' from being Batman at the beginning of the story).

Some images of Miller's depiction of the necklace getting broken (the second one is intercut with Bruce Wayne watching a news report in the 'present'): 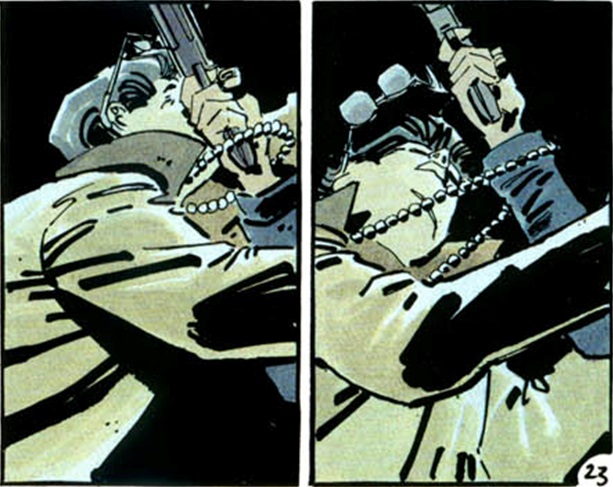 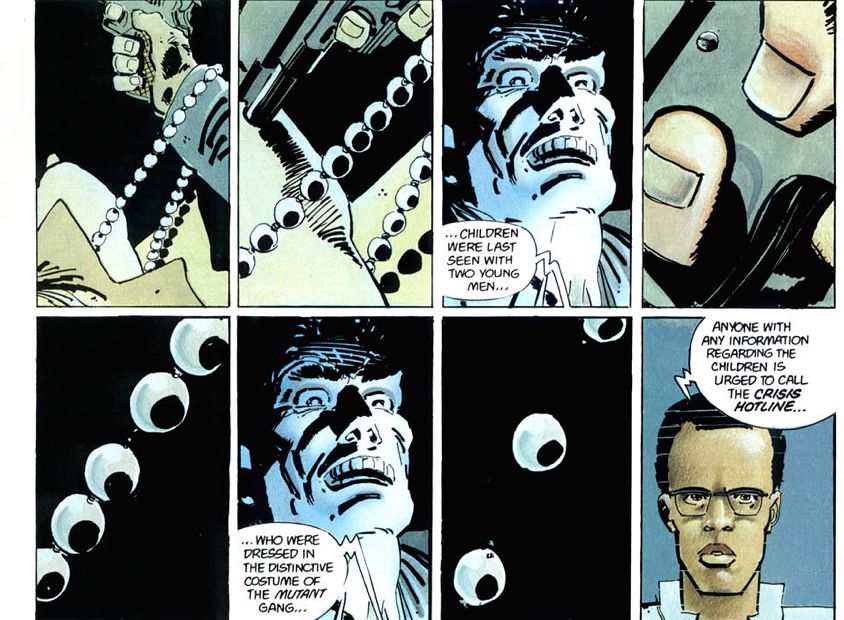 For example, in Detective Comics #33 (1939), while Martha Wayne is wearing a necklace, it may not be pearls (hard to tell from the comic quality), and it certainly does not break apart. At least, Chill doesn't grab it, so it would rather unlikely. 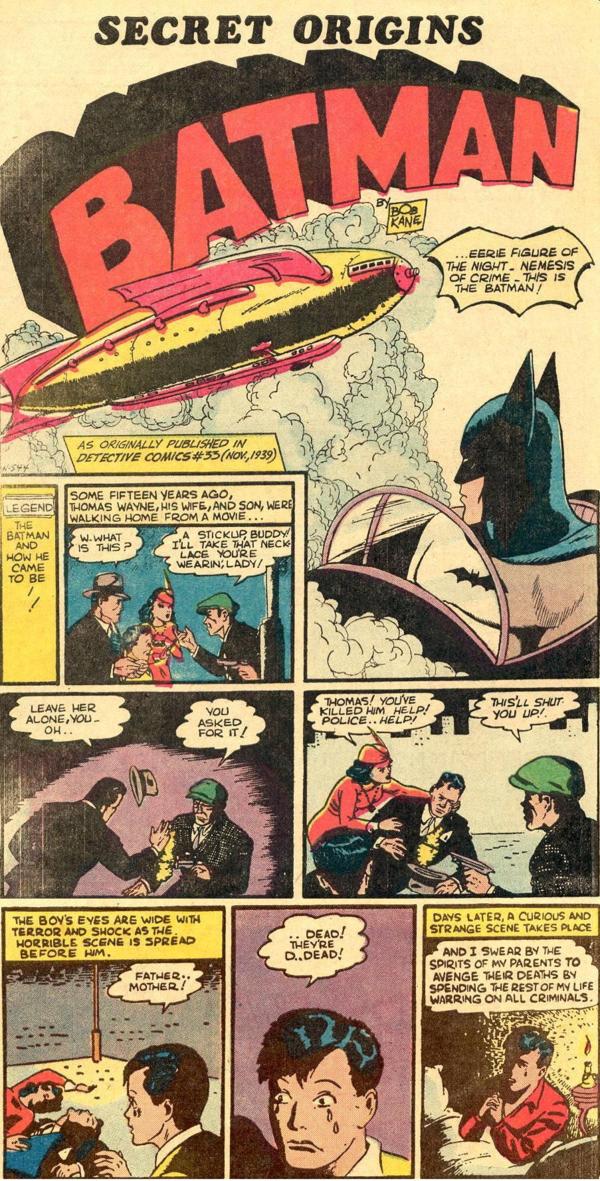 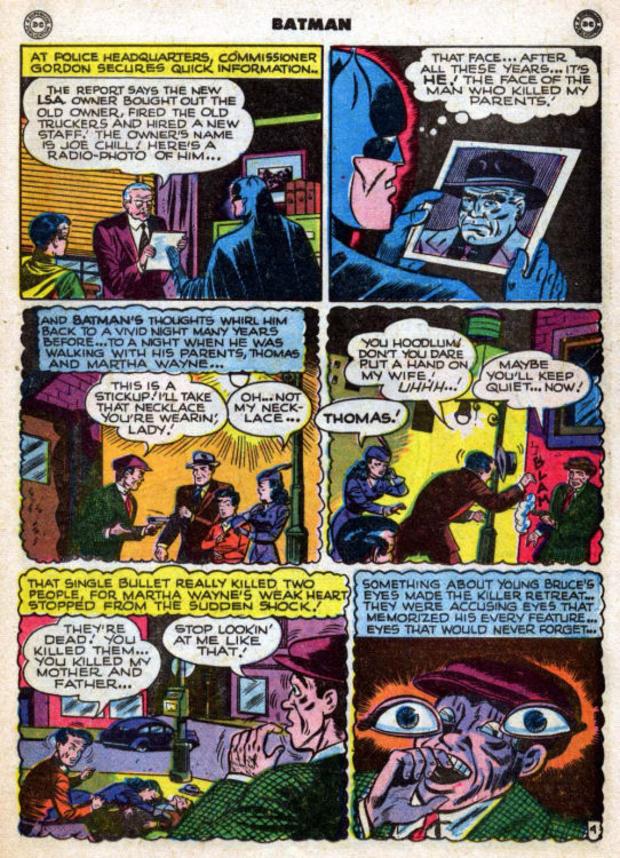 It would seem to me as a longtime fan of the many different incarnations of Batman and having seen many versions of the scene in which both of his parents are killed, that the falling pearls represent the lost Innocence and security that leads to Bruce Wayne's psychological change and is indeed the moment in which Batman is truly born. The fact that the pearls are white and were in an ordered state when worn by his mother and now after their deaths are shown to be broken, falling and scattered. This can easily be assumed to be representative of Bruce's own sense of order and security in the world being similarly shattered. With them falling around the bodies of his parents, this would seem to indicate that the world, his world has been forever changed. It is a very pervasive image and seems to be incorporated in nearly every cinematic depiction of the fall of Thomas and Martha Wayne. Earlier comic book depictions of this event do not include this element as it is most likely tied to Frank Miller's interpretation in his version of The Dark Knight Returns. One can only assume that this is an archetypal image and has been repeated several times and every cinematic and several animated versions of this event because of its powerful and nonverbal communication ability to represent the irrevocable change in young Bruce's reality. 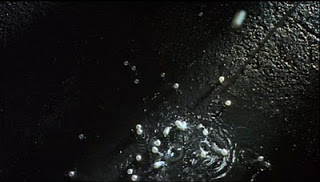