Why does hardly anyone wear body armour in The Walking Dead?

Since zombies are not shown to be any stronger than normal humans and their only weapons are teeth and bare hands, any form of body armour would surely be a very effective defence against them. Yet in the TV show the characters hardly ever wear anything more sturdy than casual clothes, often dooming them to be bitten or torn apart by a horde of walkers. Although professional body armour as worn by military, police or private security is probably not generally lying around the characters don't seem to have problems aquiring weapons including military grade firearms, which would presumably come from the same sources. Even if this kind of body armour were not available it would be trivially easy to make up something (duct tape, plastic tubing etc.) that would at least be better than nothing.

So, my question: is there an in-universe explanation for so few characters opting to make use of what would appear to be an obvious survival advantage, or is this just a something the writers avoided so that the characters would be in more peril?

TL;DR: It isn't explained outright on the show or in the comics, but we do know that the characters often wear body armor when:

First off, there's a problem with your question:

Although professional body armour as worn by military, police or private security is probably not generally lying around the characters don't seem to have problems acquiring weapons including military grade firearms, which would presumably come from the same sources.

This might be true in New Zealand, but it isn't in the US, where the show takes place. Off the top off my head, the only weapons I remember seeing on the show that would be mostly limited to military and police personnel in the US are the governor's tank, the governor's grenade launcher, Daryl's rocket launcher, and maybe the governor's heavy machine gun. All the other weapons (and even some of these exceptions) would be fairly easy to acquire in the US right now, and even easier to get after the world ends.

Here's a link to a list I made on Google Docs of all the weapons used on The Walking Dead, as recorded on IMFDb. I highlighted in yellow the small number of weapons that would be slightly harder for American civilians to obtain in most of the country; I used orange highlights to denote the very few that would be very difficult for a civilian to obtain. The orange highlights are limited to the following:

When we see people in body armor, and why they wear it:

Morales and T-Dog at the department store: 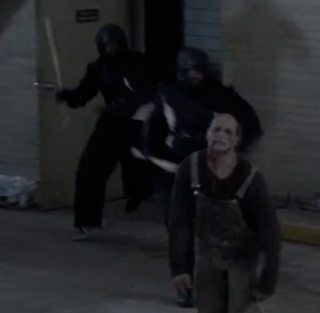 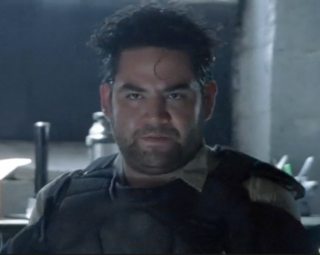 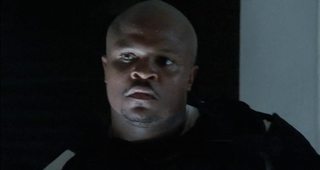 This is the first time anyone other than Glenn has gone into the city on a supply run. Glenn is the archetype of the "slip in, slip out" survivor, so he's wearing street clothes. The others were presumably nervous about entering Atlanta for the first time, so the two who were on security detail - T-Dog and Morales - opted to wear armor.

T-Dog, Herschel, Glenn, and Maggie at the prison: 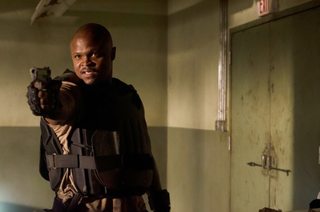 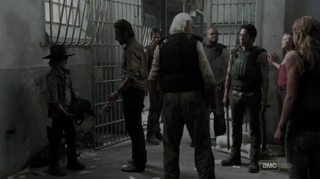 T-Dog, Glenn, and Herschel each wear parts of the riot gear suits while clearing zombies from the prison block, possibly because there are tons of zombies and they're fighting at extremely close quarters. 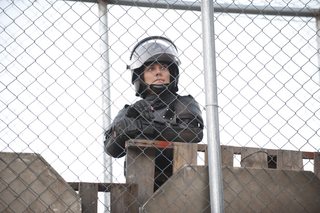 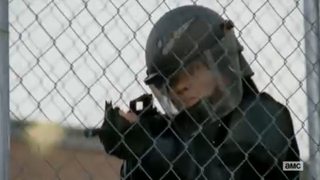 Glenn and Maggie both wear armor while fighting off the Governor's first attack on the prison, because they know there will be gunfire - in other words, they don't wear armor to ward off zombies, they wear it to protect themselves from bullets. 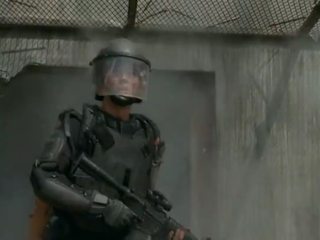 Later, Glenn wears the riot gear again while fleeing the prison after the Governor's second and last attack, because he has to run through a herd of zombies alone while weakened from his illness.

Sasha and Glenn at the Big Box: 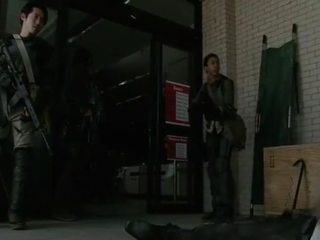 The prison community needed supplies and located a "Big Box" store, but found out it was full of zombies. When a party was sent to clear the building, a couple of them wore riot gear because once again, lots of zombies in close quarters.

Eugene on the road: 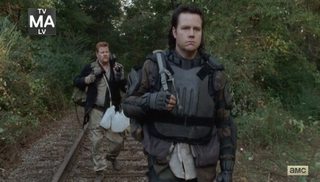 Abraham refuses to go on towards Terminus because he's worried about Eugene, who Abe believes is a scientist trying to cure the epidemic. Abe only agrees to continue the journey after Glenn offers to let Eugene wear the armor. 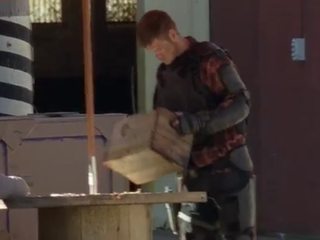 Whoever this is, he's wearing the armor he stole from Eugene, and we don't know why he is wearing it, in-universe. Out-of-universe, he's wearing it because the writers wanted Rick to see it and grow suspicious.

Soldiers from the Kingdom: 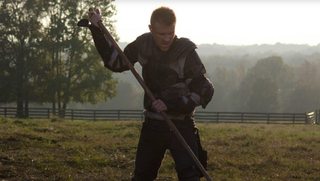 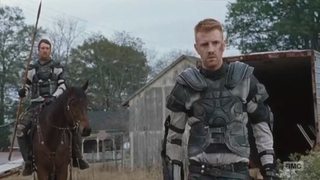 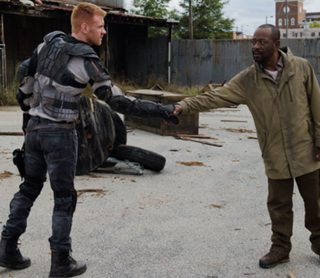 In this case, it appears that people are wearing armor simply as a matter of course while out on patrol - this simply seems to be the way they do business in the Kingdom.

Various people at the prison: 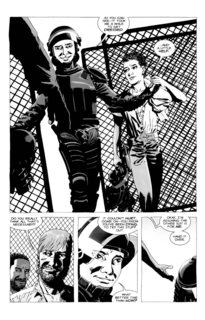 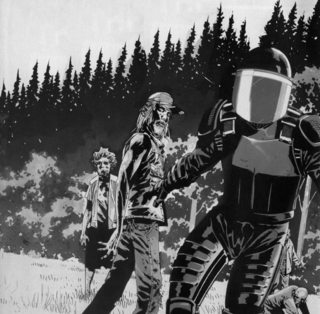 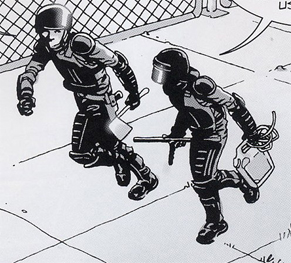 They wear the armor a bit more often in the comics, but usually because they are dealing with either herds of zombies or enemy gunfire. 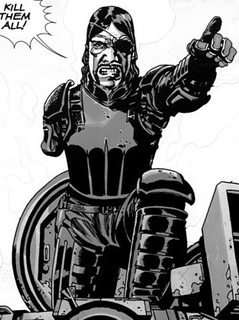 The Governor wears armor here because he's getting into a gunfight. 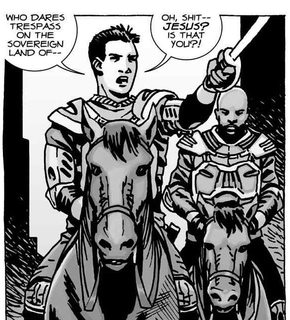 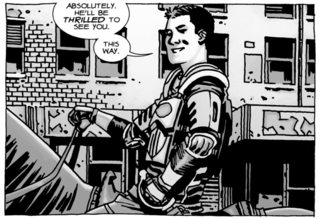 Again, the Kingdom apparently armors all its patrols, but we never learn why.

As I said above, in most cases people wear armor when it is available and the situation is particularly dangerous. Their behavioral patterns indicate that they only deem armor worthwhile when they expect one or more of the following:

The only possible exception to this is patrols from the Kingdom, who tend to wear it at all times.

I can think of a few reasons:

Speed and agility should be your first defense against the walking dead. Armor will not only decrease both these advantages that you have over zombies, but it will also sap your energy during prolonged conflict. Add the risk of dehydration, and the prospect seems even less attractive. One final, less obvious disadvantage to annor is not physical but psychological: People wearing protective garb tend to feel more confident and therefore take greater risks than those in simple clothing. This artificial bravery has resulted in too many senseless deaths. Simply put, the best protection from a zombie bite is distance. If for some reason you insist on some type of protective gear, the following summary will provide all the information necessary for prudent decision-making...

Cold, hard figures have shown that when battling the living dead, nothing has saved more victims than basic, tight clothing and closely cropped hair. The simple fact is that ghouls attack by reaching out to grab their victims, pulling them in, then biting. Logic dictates that the less material a person offers up for grabs, the better his or her chances will be. Baggy clothing, complete with pockets, straps, or anything that might hang freely, will be a convenient handle for grasping zombie claws. Anyone who has worked in factories or with some kind of heavy machinery will tell yon the importance of never letting anything hang loose. Tight clothing, obviously within comfort limits, will help to eliminate this danger. Hair can be a similar hazard. Many times, victims have been seized and even dragged by their hair to a gruesome end. Tying one's hair back before a conflict may work temporarily.
- The Zombie Survival Guide, by Max Brooks

The comic books confirm this:

Daryl and T-Dog actually discuss this:

(Daryl picks up a helmet, and walker-slime pours from it)

Daryl: I ain’t wearing this shit.

(T-Dog picks up gloves, and more foul slime oozes out)

T-Dog: We could boil them.

Daryl: Ain’t enough firewood in a whole forest, no! Besides, we’ve made it this far without them right?
- The Walking Dead, season 3, episode 1: Seed

The show takes place primarily in the southern United States. It's primarily the summer season for the first few seasons I have watched. If you have ever been to the South in the summer you would understand that wearing body armor which is heavy and at LEAST as warm as wearing sweats and a hoodie could dehydrate you and exhaust you rapidly.

There was a scene in the first episode with a few characters in full riot gear who rescue the sheriff and then immediately doff the armor in spite of it making them somewhat less vulnerable. Apparently being able to run like hell and just not get bitten is considered a better option than being protected. This does of course vary over time with some characters donning full or partial riot gear.

So basically...it's too hot and too humid to be able to wear armor for long. Or at least that is my explanation for this one of many reasons the characters seem too stupid to live.