What is the original "origin story" of the Fantastic Four?

I've seen both of the recent Fantastic Four movies, but I seem to remember a different "origin story" in the comics for the Fantastic Four.

The original comic serial (Fantastic Four #001 - 1961) had our four heroes going up in a rocketship which was bombarded by cosmic rays. 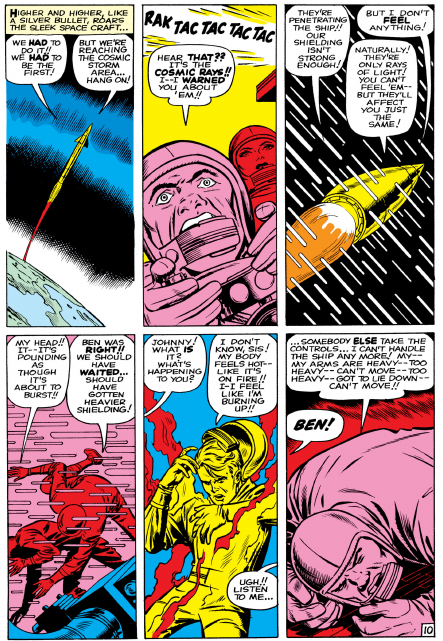 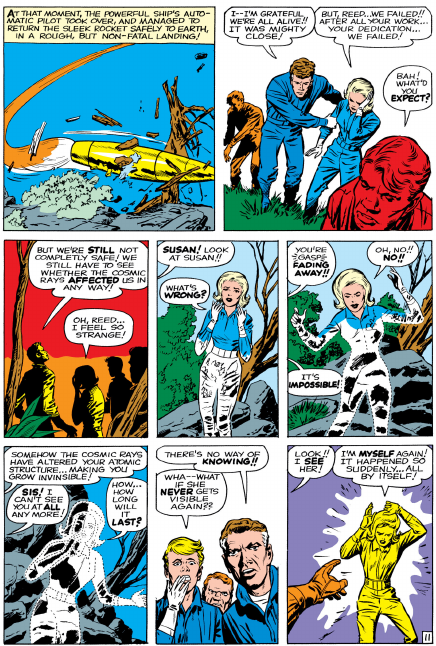 The original origin story for the Fantastic Four, in the early 1960s comic book, has the four heading into space in an experimental rocket ship which is then bombarded with cosmic rays, giving the team their powers.

As far as I can tell, there's never been any deviation from the whole "cosmic rays in space" origin.

The 1967 cartoon had this as its origin

To beat the Communists into space, scientist Reed Richards, sister and brother Sue and Johnny Storm, and pilot Ben Grimm sneak off into space in a rocket. In space, the four are bombarded by cosmic rays. The auto-pilot lands the ship back on Earth, where they find themselves physically transformed and possessing remarkable new abilities.

The main core of the FF's origin has not changed comics, only certain aspects are amended to keep the story somewhat contemporary.

In the original book, reed and his team are testing a "missile" to beat "the Reds" into space. In more recent telling (mostly updated by John Byrne) the team are testing an experimental star drive of Reed's design. The core remains the same - the test is being done surreptitiously, and outside of accepted scientific practice, i.e. testing on humans, and an unexpected cloud of Cosmic rays caused their mutations.

These little updates are made because the original stories were written decades ago, and since it's accepted that every comic story about one of these characters has occurred in the past X years (a theory Byrne called The Sliding Seven - now considered closer to ten or fifteen) some anachronistic parts of the origins need updating. Tony Stark originally built his weapons to be used in Vietnam; Byrne updated that to more modern conflicts, and the films made it Afghanistan and other nondescript areas of the Middle East. The core of the origin is untouched - he's captured by The Bad People and is forced to build a weapon.

Not the answer you're looking for? Browse other questions tagged story-identification marvel comics fantastic-four or ask your own question.

11
Fantastic Four: Meeting God -- Where's the Challenge After That?
8
Are there origin stories similar to what is seen in the Avengers movie trailer?
7
Avengers, Fantastic Four and Guardians of the Galaxy Timeline
5
Fantastic Four storyline where a parallel universe was destroyed
6
What made Reed Richards elastic in the 2015 Fantastic Four film?
9
Why couldn't Doom instantly kill the Fantastic Four?
3
Is there anything in Marvel canon comparing the power levels/abilities between Johnny Storm (The Human Torch) and Jim Hammond (the original Torch)?