How did the Hill Valley clock tower break?

We all know that in Back to the Future, the clock in the Hill Valley clock tower was broken when lightning struck it on Saturday, November 12, 1955, at 10:04 P.M. It was this event that was key for Doc Brown to concoct his plan to send Marty McFly back... TO THE FUTURE!

The most reasonable explanation I can come up with is that Doc, knowing the non-breaking of the clock could create a paradox, set up some means of purposefully breaking the clock and making it look like the lightning did it. But is there a "canon" answer?

The power flows through the cable, that's correct. However, the wrong assumption is that the clock is not part of the circuit, because it actually is!

If you stop the video linked by Paulie at the right moment, you'll see the lightning striking the highest point of the building (which actually makes sense): 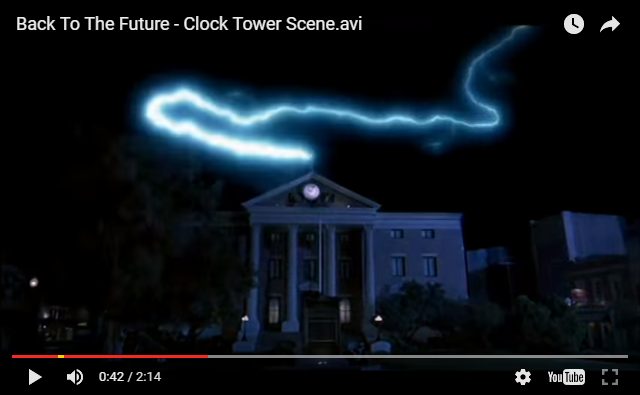 As you see, the lightning strikes that small antenna or flag pole on top, not the pointers of the clock. The electricity then continues through the clock, over the hands and then the cable.

As such the whole energy is not diverted from the clock, but rather pulled through it directly.

If Doc wanted to protect the clock, he'd most likely been able to attach the cable to the flag pole/antenna instead, but it's also likely that this might have screwed the whole circuit, since we don't know the actual resistance of the clock compared to the cable and flux capacitor. Worst case it could have been that the clock provides a lower resistance towards ground, which would have caused most (if not all) of the electricity not going through the cable and time machine.

So the actual (simplified) circuit looks most likely like this: 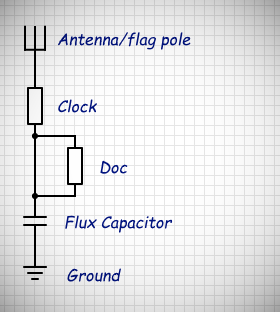 Also note that despite Doc holding the cable, he's essentially short-circuited out (meaning there's essentially almost no potential difference between his hand and therefore next to no energy flowing through him), which allows him to survive this (at least on a Hollywood level of physics being applied, considering the halo around the cable, etc.). He's like a bird sitting on a power line.

Edit: After watching the scene over and over again (after reading Valorum's answer), I noticed that you can actually see that the top end of that cable is connected to another cable, which goes straight up to the antenna. 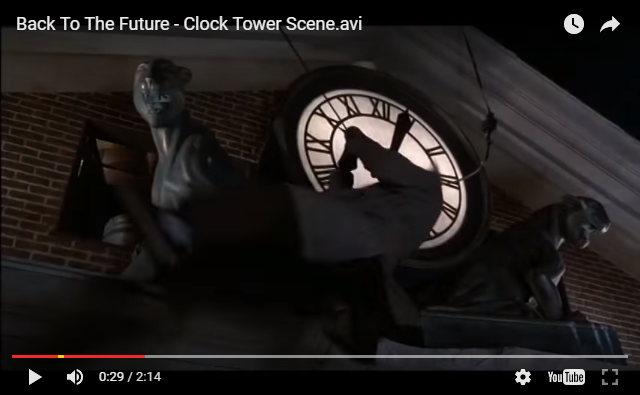 So it seems like Doc intentionally used the hands of the clock as some kind of cable relief (otherwise he would have unplugged it when he attempted to slide down).

Let's have a look at the updated circuit: 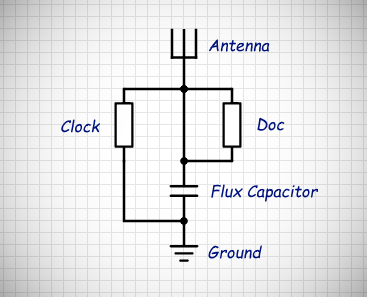 As you can see, this changes nothing for Doc. However, it changes a lot for the clock! Due to the clock now being parallel to the rest of the circuit, there'll be a most likely significant higher voltage and current involved now. Before the Flux Capacitor could act as some kind of current limiter, which is no longer possible. So based on the resistance within the time machine this could actually mean that most - and not just a bit - of the lightning's power interacts with the clock (read: destroys it).

The 1.21 gigawatts of power isn't "drawn away from the tower" at all...it's passed down an a hefty cable that's wrapped around the hands of the clock. 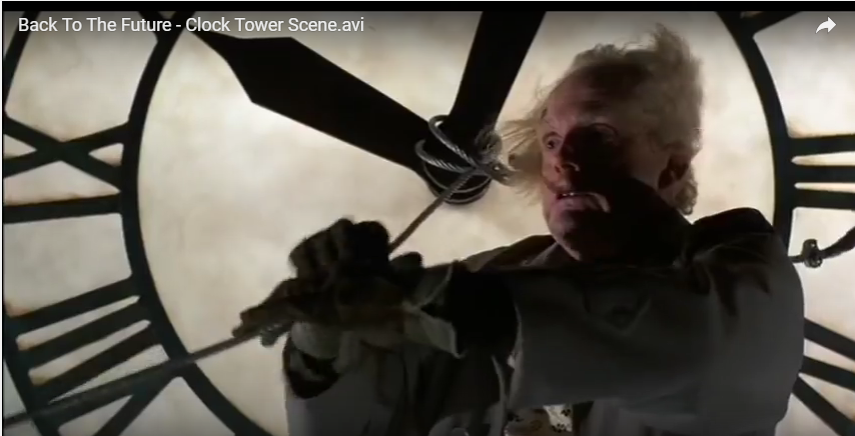 So when the power passes through the clock...it breaks as would most things hit by lightning.

The whole scene can be seen below:

The original plan was to use the lightning conductor to draw all of the power of the strike away from the clock and channel it down a cable running into the DeLorean. This would, as you've noted, result in the clock not being damaged by the lightning.

If you go to 0:44 in the clip below, you'll see that the lightning still hits the (now disconnected) lightning rod. With nowhere to go, the electricity arcs over from the rod and hits the metal cable, around four feet below the level of the clock hands. This has the effect of transferring power downward to the car, but also upwards, through the metal hands of the clock back into the clock mechanism.

The problem lies in the fact that the clock is mechanical and weight driven, not electrical (except for the later added backlit dial) because of the fact that it was built in 1885 (no electricity).

Therefore, the electrical current would have never affected the clock at all when it hit the lightning rod on the top of the building and most likely would have went straight to ground.

The existing answers make very valid points, but may also be overthinking it.

Lightning is not static. It's not a small amount of energy by any stretch of the imagination. Even if the cable were to divert the lightning away from the clock, there would be an explosion. Even without an explosion, the lightning is so powerful and erratic that it would arc to every piece of metal even close to it. If it's got enough power to arc from the sky to the ground, it's going to arc from a cable to a clock that's a foot for two away.

Lightning is incredibly volatile, for lack of a better term. It's not a clean energy transfer by any means. Think of a tree. When lightning strikes a tree, the whole thing explodes and or catches fire. If it strikes a big metal antenna that's connected to a building, it will break some stuff.

The antenna was not a lightning rod, it was a conduit/conductor. It wasn't feeding directly into the ground giving it a straight, clean path like a normal lightning rod would. It branched at the top, and had a far from linear cable attached to it. It's gonna be a harsh energy transfer.

Other than that, yes, I agree that wrapping the cable around the hands of the tower was a determining factor, even in the original design, I'm pretty sure it would have broken the clock.

15
Back To The Future: Time Travel Paradox
9
How did the Doc land the Delorean in 1885?
19
How is the DeLorean powered in the final trip back in time in Back to the Future III?
6
Why did Doc refuse to let Marty tell him about the night Marty went back to 1955?
4
Do any other dates in Back to the Future have any significance out of universe other than November 5?
6
What is on Doc Browns video tape at the end of Back to the Future?
16
How did Doc know exactly at what second the lightning would strike the clock tower?