What changes have been made to Hogwarts throughout the series?

The question Does the exterior appearance of Hogwarts really change throughout the series? merely addresses the fact that Hogwarts does indeed change depending on what movie you're watching. I want to know what changed.

I'm looking for more examples of what all changed (visual comparisons, before and after, etc. are encouraged). As many specifics as feasible would be greatly appreciated!

There are some real complexities here, because some areas are approached differently, like entrance courtyards becoming clock tower courtyards, etc, and maybe one day I will use books and websites to try to clarify these points. But, let's start off with some clear changes:

During the first two films, Hogwarts as a whole was decidedly flat. Hagrid's was reached by walking out the front door and across a flat field. 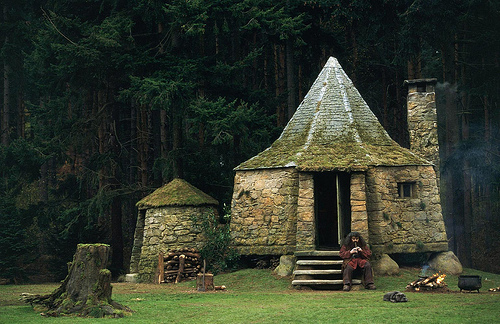 Compare to the change in Prisoner of Azkaban: 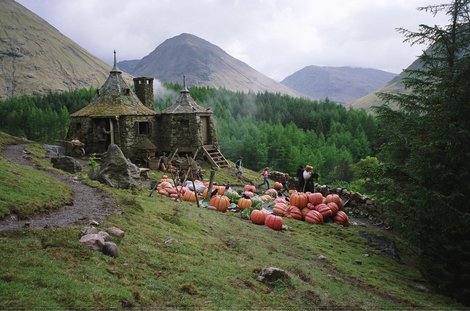 For Prisoner of Azkaban, the setting was altered dramatically to reflect Hogwarts' position in the Scottish mountains. The covered bridge was seen for the first time. We saw the stone circle overlooking Hagrid's hut, which was now much further from the castle.

The front door was reached via a courtyard rather than opening straight onto the lawn. Other changes include new towers here and there as well as the style of pre-existing towers being changed. 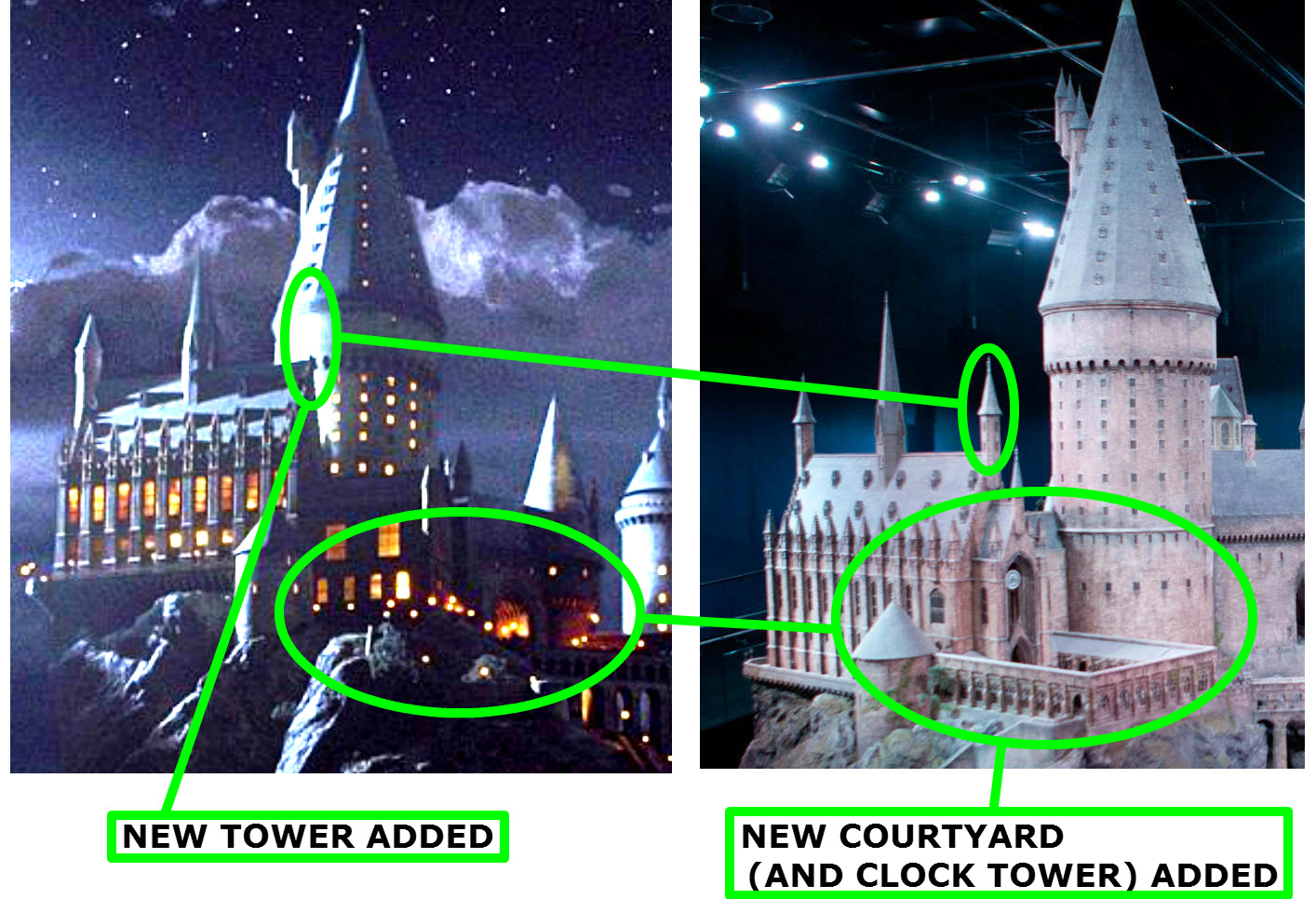 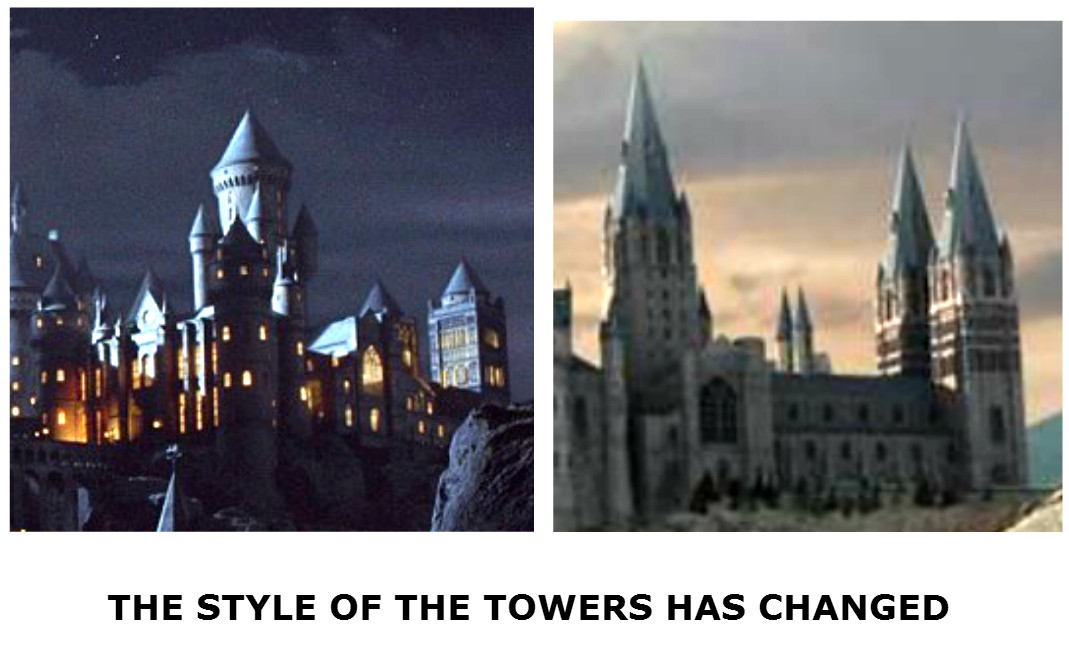 Goblet of Fire featured more of the castle itself as a whole as Harry and the dragon flew and climbed all around it. It confirmed that the changes in PoA were there to stay. Goblet of Fire is the first time we see the Owlery, a tower far from the rest of the Castle where the delivery owls are kept. 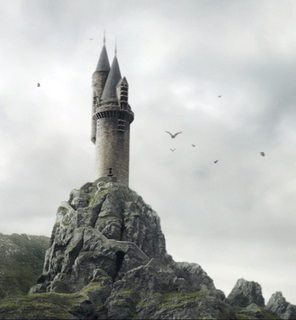 Order of the Phoenix changes:

There were changes in the overall layout for Order of the Phoenix which are more subtle, but the clock tower was seen more prominently and in a new position.

Half Blood Prince saw the introduction of the Astronomy Tower. 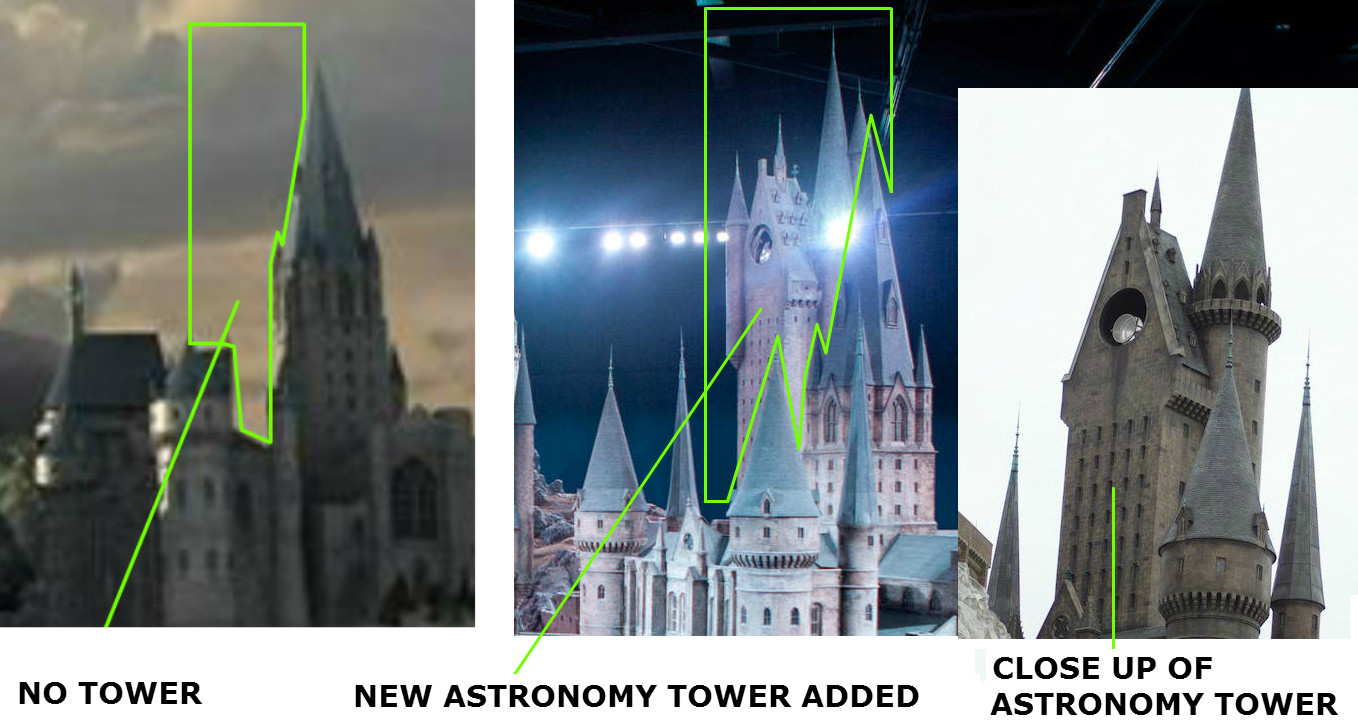 Looking at Deathly Hallows as one instalment, a stone bridge of sorts was added to the entrance mostly for a more dramatic siege. It appears to be that they moved the original viaduct from going across the front of the castle from left (near the entrance) to right so that it was projecting away from the entrance. 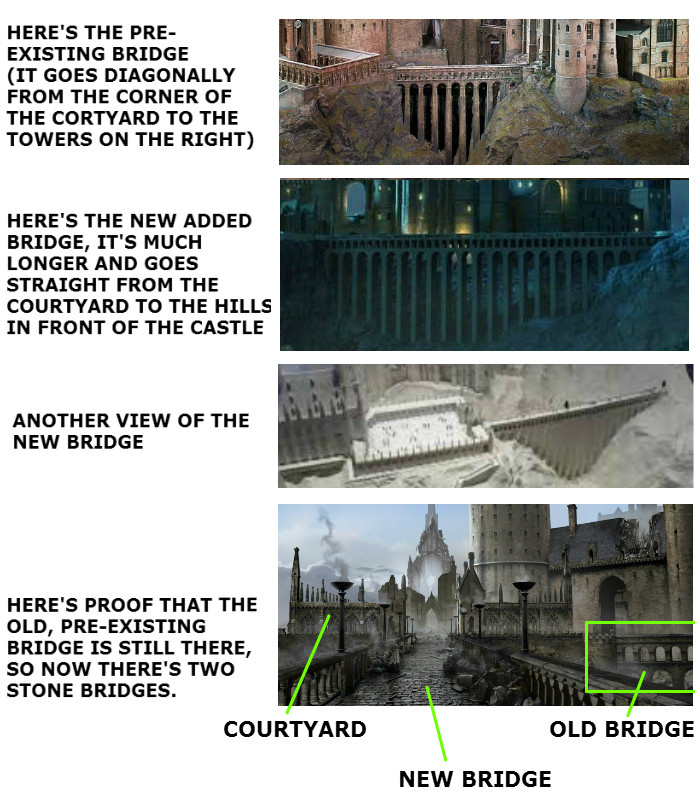 If you are interested in significant interiors, the staircases were changed dramatically. Traditionally the stair cases looked like this: 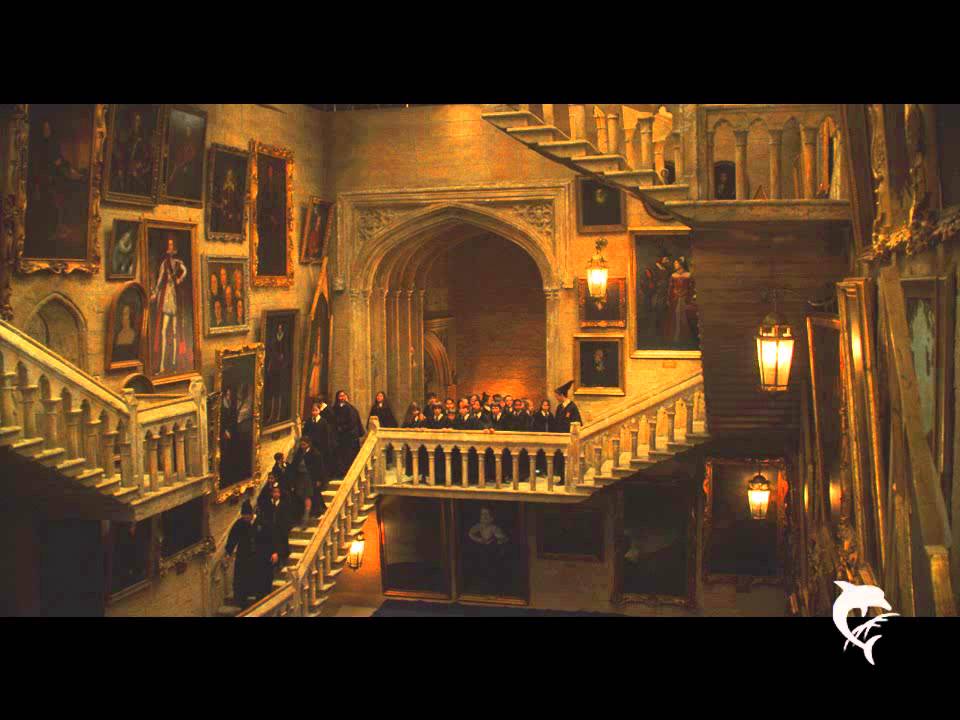 In this film, Harry fights Voldemort on stairs which look like this: 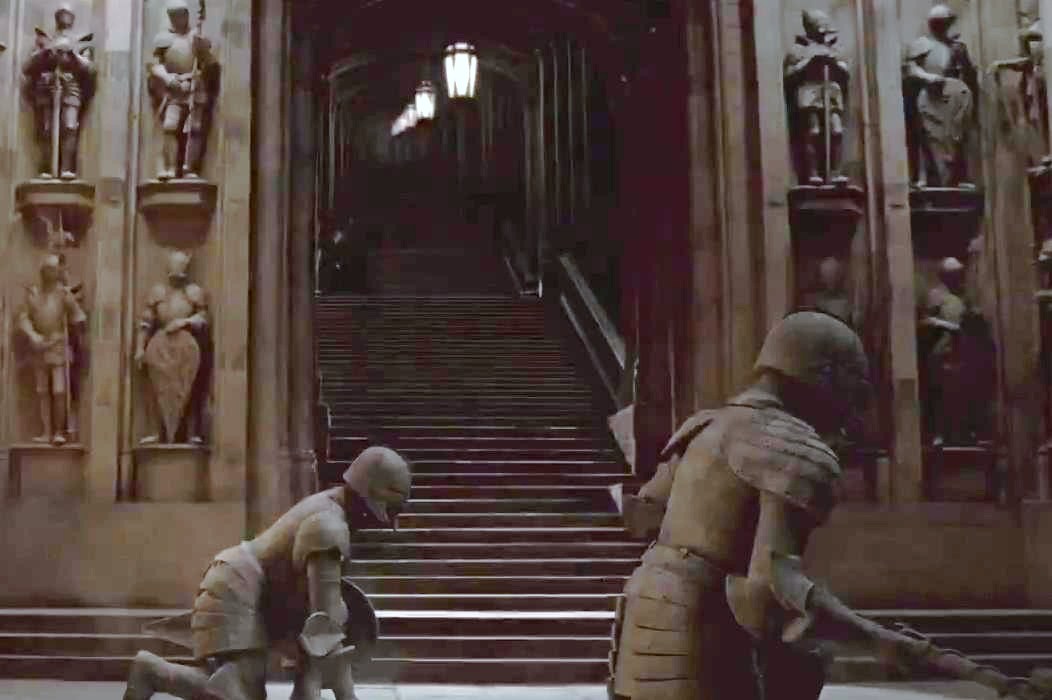 (People debate that they are different stair cases, but I have chosen this second image as it shows that this large, straight group of stairs is just beyond the Entrance Hall, where it was not before.)

While the entrance courtyard changes frequently in the films, it certainly is much larger in Deathly Hallows Part 2: 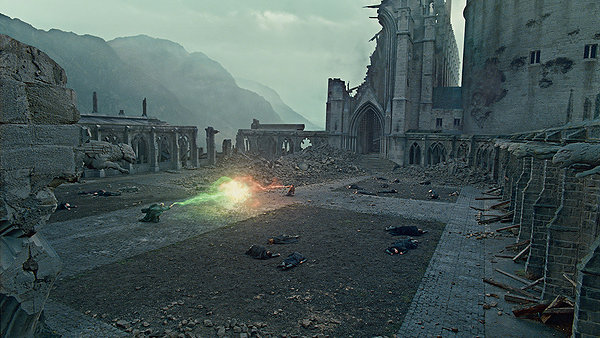 This is from The order of the Phoenix - it looks large, but compare the number of gargoyles. 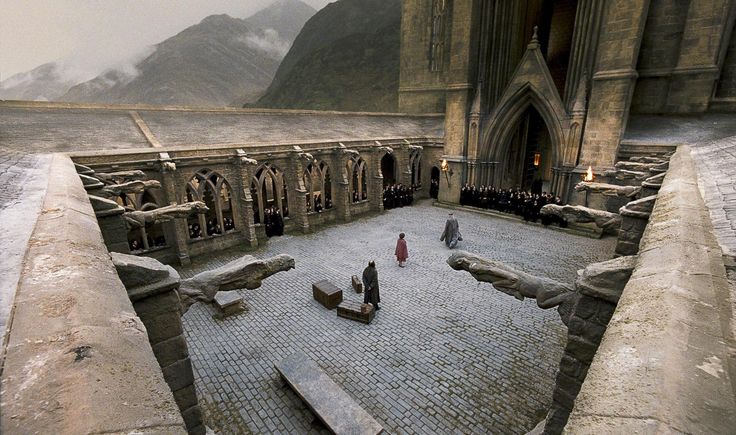 Well, Hogwarts changed a lot over the years, and a lot is still undetermined. The changes I will be listing include changes to the castle and to the grounds, so the Quidditch Pitch, Hagrid's Hut. Here is a list of changes that are known to have taken place:

Believe it or not, there were at least seven changes made to the castle for the Chamber of Secrets film, those being:

Prisoner of Azkaban one of the movies with the most changes. The design of the castle was standardised more and the terrain around it changed to be more exaggerated than before.

The Goblet of Fire did not contain anywhere near as many changes as Prisoner of Azkaban, but it still contained some changes.

This is just a quick comparison between the Hogwarts from Philosopher's Stone and the Hogwarts we see in Crimes of Grindelwald: 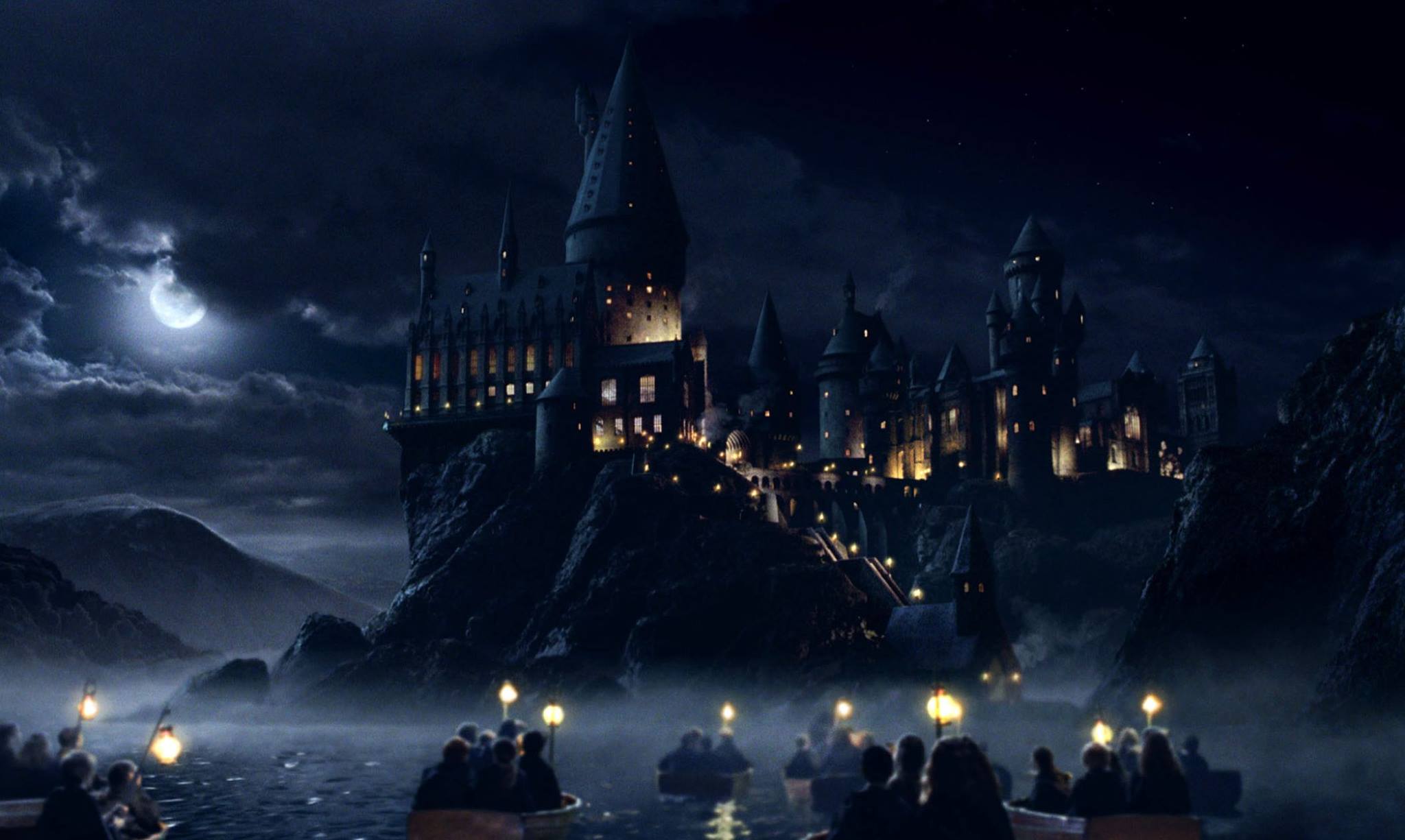 The Whomping willow is removed in Half Blood Prince too. The whole area from where it was placed in PoA is gone and there is only a hill instead.

In Sorcerer’s Stone, when Percy takes the first years to the portrait hole, it is located away from the main staircases that change and it is a lady in a pink dress. In Prisoner of Azkaban, the portrait is of a totally different woman and the location changes to the changing staircase area. 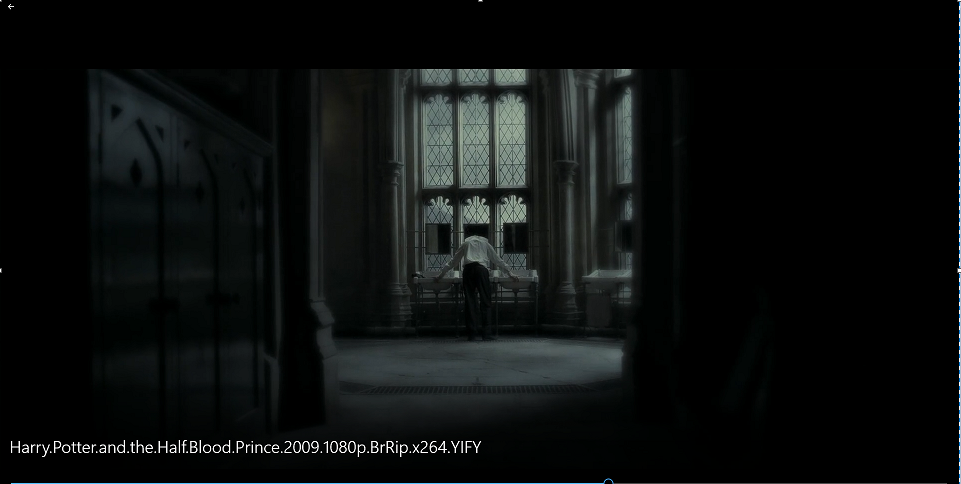 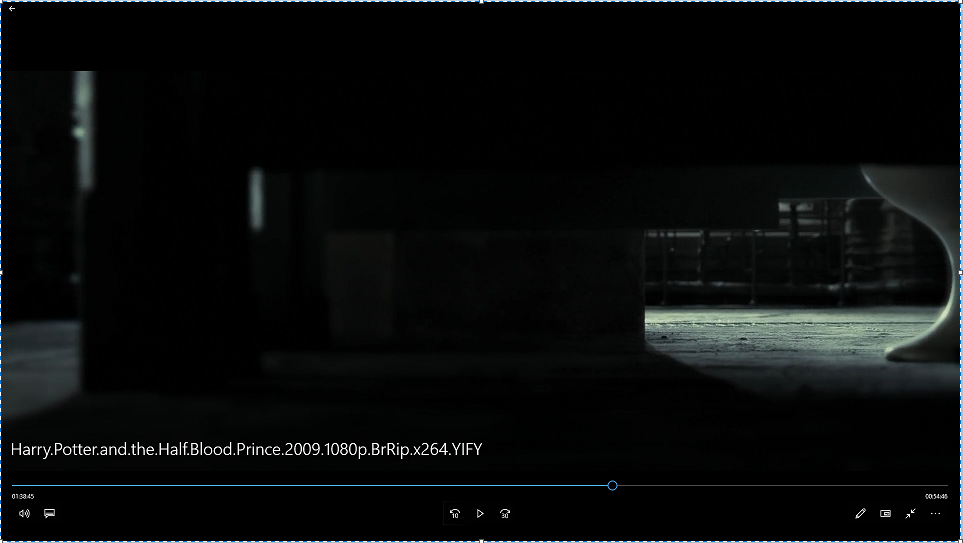 Now you might say that they are not the same bathroom but that would be wrong. In the HBP book,before Harry and Malfoy fight, Malfoy cries to Moaning Myrlte that he wont be able to kill Dumbledore, which means that it is the same girl's toilet as in CoS, since Myrtle is there.

ThruGog wrote a great answer on this topic! I just want to add a few points:

Not the answer you're looking for? Browse other questions tagged harry-potter movie hogwarts behind-the-scenes or ask your own question.

7
Does the exterior appearance of Hogwarts really change throughout the series?
4
Is the Lego Hogwarts Castle consistent with canon?

35
Why do acts of "accidental" magic only seem to happen around Muggles?
7
Does the exterior appearance of Hogwarts really change throughout the series?
12
What is this Hogwarts Tower?
4
What protection does Hogwarts have at the school entrance?
0
Why couldn't the Hogwarts defenders have recreated the Shield after Voldemort broke it?
48
Why does Hogwarts have dungeons?
35
Was it required at Hogwarts that a Head of House have been a student in that House?
28
Is it plausible that Hermione forgot what she read in Hogwarts: A History?
3
How many animated Smurfs movies have been made?