What school name was used to enter Harry into the Goblet of Fire? [duplicate]

"It would have needed an exceptionally strong Confundus Charm to bamboozle that goblet into forgetting that only three schools compete in the tournament... I'm guessing they submitted Potter's name under a fourth school, to make sure he was the only one in his category..."
— Alastor Moody

I know this is a seemingly unimportant detail, but it has bothered me ever since I first read the book years and years ago. What was the name of the fake school that was written on the slip of paper to assure Harry would be picked? Has this ever been revealed?

We know that Crouch Jr. did indeed use this strategy, by his own admission:

“Who put your name in the Goblet of Fire, under the name of a different school? I did."

We can guess from his previous quote that he used a Confundus Charm to make the Goblet believe that four schools competed.

We know that Dumbledore must know, though:

“Anybody wishing to submit themselves as champion must write their name and school clearly upon a slip of parchment and drop it into the goblet,” said Dumbledore.

Thus the name of the school must be written on the parchment.

Automatically, it seemed, Dumbledore reached out a long hand and seized the parchment. He held it out and stared at the name written upon it. There was a long pause, during which Dumbledore stared at the slip in his hands, and everyone in the room stared at Dumbledore. And then Dumbledore cleared his throat and read out —

But to my knowledge, nowhere in canon is it mentioned what that school was. It could have been any real school, or perhaps even a fake one.

In the movie, when the slips of parchment come out of the Goblet of Fire, there are no school names on them. The school names could have burnt but it seems more probable that the candidates did not write them on the parchments.

EDIT : These pictures do not come from a scene in the movie. Tanks to @Valorum for pointing out that they are movie props. 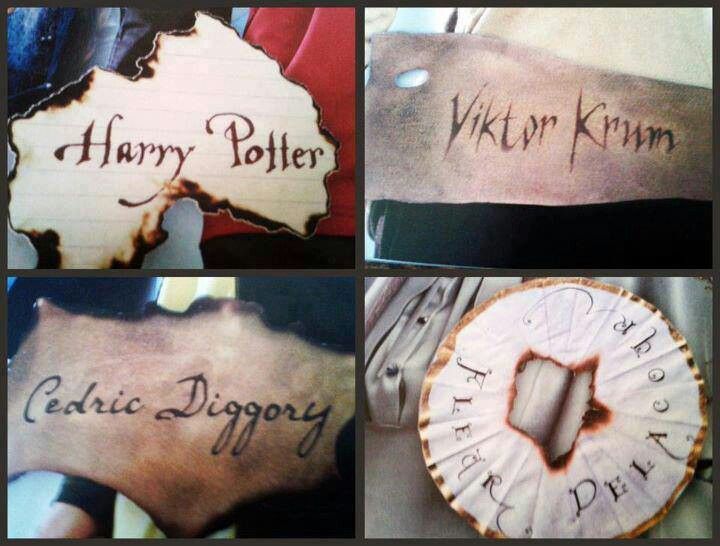 This does not really help you but it reinforces @Jonah's answer : we may never know.

27
In the parchment the Goblet of Fire spit out, why wasn't the school name there?