Which comic had Batman getting punched by Wonder Woman after he kissed her?

I came across this comic book page on the Internet, I would like to know which comic this page belongs to. 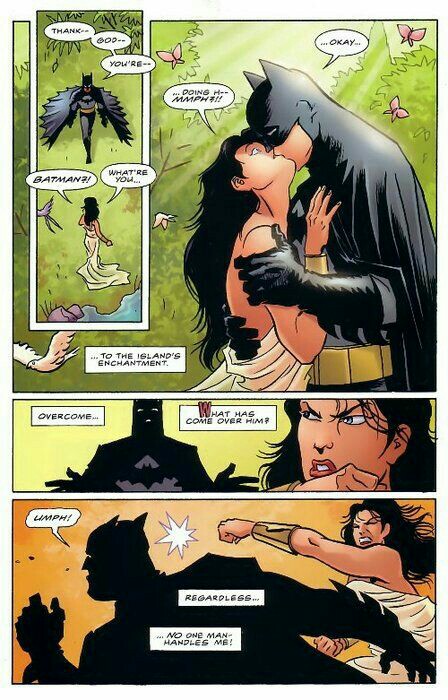 Worried about her, Superman and Batman travel to Themyscira to see how Diana is doing. Breaking off the harness and gliding down, Batman finds Diana after taking her bath. Overcome by her beauty he rushes forward and kisses her, but Diana, surprised, decks the Dark Knight....

Further backup, someone references it in this Goodreads review:

Not the answer you're looking for? Browse other questions tagged dc comics batman episode-identification wonder-woman or ask your own question.

4
Which Batman comic had the Joker trick a man into thinking he was ugly?
17
When has Lex Luthor been a Cardinal or Pope?
3
Which was the Wonder Woman and Spider-Man crossover comic book?
7
Which was the comic in which Wonder Woman got married to a green alien/creature?
6
Identify a comic where US army captures and arrests Wonder Woman
14
Which comic book has this image of Wonder Woman carrying Superman and Batman?
16
Looking for a Batman Comic where Batman had real wings
11
In which comic does Batman travel back in time to the night of his parents’ murder?
8
Which comic is this panel from showing Batman sitting at the BatComputer in the BatCave researching the Fortress of Solitude?