Why do the Guardians of the Galaxy have Captain America's shield?

In Issue #22 of Guardians of the Galaxy, we see that the Guardians have what appears to be Captain America's shield in their homeship. 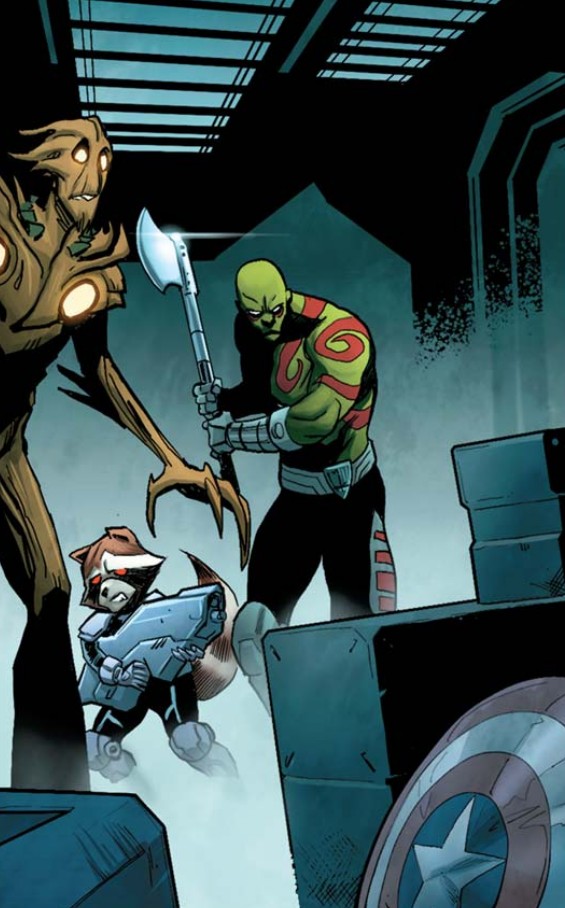 Has this shield been shown in their ship before, or commented upon? Have any of the creators talked about it?

Big thanks to Thaddeus Howze for tracking down the image for me.

Neither of the existing answers really deals with how some guy from the 31st century having found Captain America's shield results in it being in the Guardians' ship in the 21st century.

During the Guardians of the Galaxy run from 2008-2010, Vance Astro (a.k.a. Major Victory) from the 31st century is found, encased in ice, in space by the Guardians (in issue #1). he joins the team, and remains a part of it until the team dissolves following The Thanos Imperative (which concluded both the Guardians' series, and the Nova series that was running at the time).

I glanced through the series, and I don't see a clear explanation of how Vance wound up in "his past" (well, actually, he'd be from a different timeline - the future Vance Astro had met himself in the present, and altered the timeline so that the present Marvel universe (aka Earth-616) couldn't be the universe that the future Astro came from).

From what I did see, it's likely Astro probably came back from the future due to the impact of the Rift created during the "War of Kings" storyline - the one that lead to the Cancerverse, which was dealt with in the afore-mentioned The Thanos Imperative mini-series.

As near as I can tell, the future Vance Astro was still alive and active (and still had Captain America's shield) when that mini-series ended. To the best of my knowledge, we haven't seen him since then (in our time, at least).

So, it's possible that the shield in the Guardians' ship is the one Vance Astro brought back from his future. Since Vance was a member of the present-day Guardians along with Rocket, Groot, Gamora, Drax, and Starlord, it's possible one of them wound up with the shield, if something happened to the future Astro between the end of the 2008-2010 series, and the start of the 2013 series.

It must be a reference to Vance Astro. 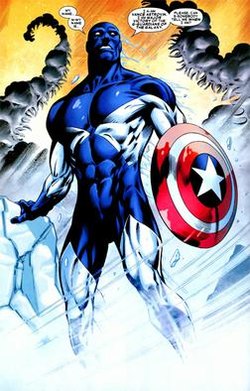 Vance Astro first appeared as a founding member of the Guardians of the Galaxy. According to Roy Thomas, all of the Guardians of the Galaxy were created in a conference between Arnold Drake and Stan Lee, but it remains uncertain whether each individual character was created by Drake, Lee, or both.1 The Guardians of the Galaxy debuted in the partial reprint title Marvel Super-Heroes with issue #18 (Jan. 1969), written by Drake and penciled by Gene Colan. After five years' absence, he was revived in several Marvel titles: Marvel Two-In-One #4-5 (July-Sept. 1974), Giant Size Defenders #5, and Defenders #26-29 (July-Nov. 1975). In each case, other heroes such as Captain America, the Thing, and the Defenders aid Astro and the Guardians against the alien Badoon. The first story established that if Vance Astro's containment suit were breached, he would age 1,000 years in a second. This drew numerous queries from readers, and the letters page in Marvel Two-in-One #7 responded by stating that Vance feeds and defecates intravenously.1 The Guardians were also featured in Marvel Presents #3-12 (Feb. 1976 - Aug. 1977).

The details of the reference are later on in the same wiki page. During his run on the book, Jim Valentino wrote a "Quest for the Shield" story where Astro and the (original/from the future) Guardians retrieved Cap's shield, and he began using it.

Quest for the Shield and release from containment suit

After returning to his own time, Astro became involved with his teammate Aleta after she was freed from her physical merger with her ex-husband Starhawk. Astro went on a quest to find the lost shield of Captain America. He battled Taserface and the Stark during the quest, and defeated the Stark. Then, after retrieving Captain America's shield, he was critically injured in a battle with a gang that based themselves on the Punisher. Vance was healed by Krugarr, Doctor Strange's former apprentice and the current Sorcerer Supreme, and was freed from his containment suit. He then adopted a costume similar to that of Captain America to go with the shield and took the name Major Victory.

Shortly thereafter, Krugarr's enchantment was removed, and Vance began to age rapidly. He was saved by a symbiotic costume, seemingly of the same species as Venom. However, it was later determined that it was not actually a life form, but engineered to respond to the wearer's biological state. 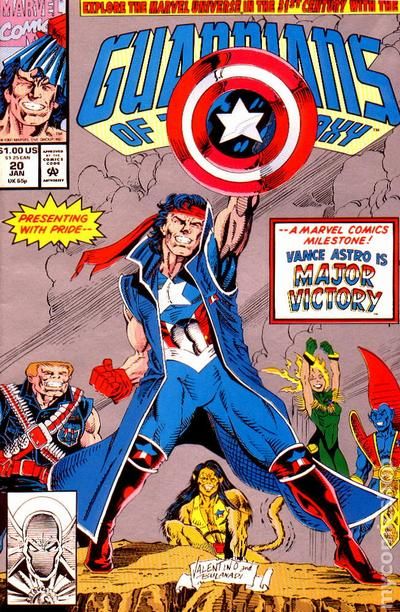 (Interesting aside - According to Jim, this cover was designed for a special enhancement - the shield was to be a hologram insert. Plans changed after the cover was completed.)

So it may be safe to assume that it indeed may be Cap's shield, but the one from the future, used by Astro/Victory.

Not the answer you're looking for? Browse other questions tagged marvel captain-america guardians-of-the-galaxy easter-egg or ask your own question.

10
Who is Major Victory, and why does he have Captain America's shield?