Why didn't Harry use the right-hand-rule (or other methods) to solve the Triwizard maze?

As with most labyrinths with conjoined borders, there are age-old methods of solution, such as simply placing one hand on a wall and proceeding through the maze without removing it until you come to either the centre or the exit (right-hand-rule). Yet IIRC Harry neglects to try this, let alone address any traditional maze-solving methods at all during the Third Task.

I'm sure the case is different for enchanted mazes, but I was wondering specifically whether this was actually addressed canonically at all, either by J.K. Rowling or the directors/screenwriters (books or movies).

Not addressed anywhere in canon, as far as I'm aware. With that in mind, let's proceed with speculation.

Even if we ignore the fact that the structure of the maze may potentially be changing (because it's magic), there are several factors that would cause Harry not to use a maze solving algorithm:

First of all, maybe Harry just ignores these "scientific" methods. However, the participants had ample time to prepare for the final task, and I find it difficult to believe that Hermione did not know of these strategies:

Finally, in the last week of May, Professor McGonagall held him back in Transfiguration.

"You are to go down to the Quidditch pitch tonight at nine o'clock, Potter," she told him. "Mr Bagman will be there to tell the champions about the third task." [...]

"That's right!" said Bagman. "A maze. The third task's really very straightforward. The Triwizard Cup will be placed in the centre of the maze. The first champion to touch it will receive full marks." [...]

"There will be ostacles," said Bagman happily, bouncing on the balls of this feet. "Hagrid is providing a number of creatures ... then there will be spells that must be broken ... al that sort of thing, you know. [...]"

Harry's nerves mounted as June the 24th drew closer, but they were not as bad as those he had had before the first and second tasks. For one thing, he was confident that, this time, he had done everything in his power to prepare for the task.

Then, the right-hand strategy assures that you either find the exit or return to the start, which is surely not a desirable outcome, especially as there are other contestants. 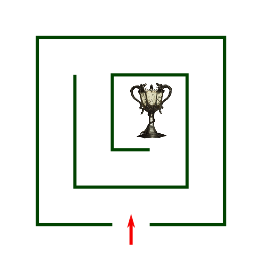 In this example using a right-hand or left-hand approach always gets you back to the entrance (and I guess the task maze would be more complicated!)

Even supposing we are in a situation where the right-hand rule would make you find the exit, the path could be extremely long and convoluted, again a disadvantage in a competition; a longer route, besides taking more time, also means a higher chance of bad encounters along the way. 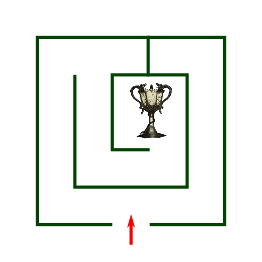 In this example the cup is eventually reached using a right-hand approach, but only after having explored the dead end on the right side; turning left and then right makes for a much shorter path.

And I think this is the main argument against using a fixed strategy: the magic encounters. The right-hand rule can work only if you are always free to choose your direction at each fork, which is not the case when magical creatures are involved! When Harry meets a Skrewt he is forced to make a U-turn:

Then he rounded another corner, and found himself facing a Blast-Ended Skrewt. [...]

The Skrewt was inches from him when it froze - he had managed to hit it on its fleshy, shel-less underside. Panting, Harry pushed himself away from it and ran, hard, in the opposite direction [...].

And again, upon meeting the sphinx Harry is given a chance to pass her (which he is told it's the quickest way) only if he guesses the riddle:

If the riddle was too hard, he could keep silent, go away from her unharmed, and try and find an alternative route to the centre.

If you cannot always apply the right-hand rule, there is no point in applying it at all.

Finally, as user @damien-lavizzo already said, a scientific method could not be the right choice when magic is involved. However, re-reading Chapter 31 - The Third Task I could not find references to the paths shifting and changing, so that could just be a movie thing.

The answer is extremely simple. It's part of lfurini's answer, but it's not mentioned until halfway through, so I fear people are losing sight of the core of the explanation:

The right-hand rule is not a guaranteed solution to this type of maze.

This has nothing to do with Harry's personality, the magical properties of the maze, etc.

* Right-hand rule explanation rephrased as per SteveJessop's comment on another answer.

Because all the simple methods would probably fail.

There are many maze-solving algorithms, check this wikipedia page: https://en.wikipedia.org/wiki/Maze_solving_algorithm Now the problems with these ones on are either the necessary time (remember, this is a race) or the lack of information in Harry's case:

The other two methods, the Recursive and the Maze-routing are too complicated to expect Harry using them.

I don't think it was addressed canonically in the books, but in the film the maze is nearly immediately shown to shift and change right from the get-go. Using the "right hand rule" largely wouldn't make sense when the maze is demonstrating that it changes itself nearly constantly.

Hardly any information about the maze was available. Even if it didn't actually shift on the fly, there was no way for Harry to know that. Or to know whether it was a type of maze that was solvable by any wall-following algorithm, let alone quickly.

As @lfurini's answer points out, Hermione was almost certainly aware of maze-solving strategies (either already or from research). During the ample time between the maze competition and when they first learned that it would be a maze, she probably at least mentioned the wall-following idea to Harry, in case things got to the point where he was lost.

She probably didn't take up much of Harry's time with more than the basics, because it's not a safe assumption that it would work at all. And remember, they have to plan according to what they know, not what we as readers learn about the maze during/after the competition!

I think it's a safe bet that Harry was at least somewhat prepared for maze-solving as its own problem, but it turns out that wasn't needed, so the book didn't mention it at all. (Not exactly riveting story material.) Or maybe he was mentally tracking a wall at least at first (but not planning to depend on that strategy), but again, not mentioned in the text.

Harry had magic to point him towards the centre, but that's not the same thing as pointing him along the shortest path to the centre. There could be dead-ends.

I suspect that we're giving maze-solving more thought than JKR did. While I enjoyed the books, logic was not always a high priority. (e.g. extremely powerful time travel exists in the world, but only gets used in one book, not all the time by the bad guys.) My impression was to enjoy the characters and storytelling, and don't think to hard about how the world works.

If I remember correctly, the maze, being enchanted kept changing. Walls would merge and be created while the champions were in the maze. So any standard rule would fail.

Also, time was of the essence. The triwizard champion would be the person who was first to find the cup. Hence a general direction to go in would be much more helpful than a heuristic rule which doesn't optimize the time taken, even if it is able to find a solution.

9
How would the Four-Point spell help Harry find the center of the maze?