There is a book (I think it was actually a trilogy) but the first book consisted of the author in modern day reading a piece of paper and she was pulled into the Norse Mythological world. I think the main character ended up being an archer, but I'm not entirely certain.

I read it in the late 90's, but I am pretty sure it had been around for a few years. I read it in English and I am fairly certain that it was written in English. I think that the modern world was America, and I think that the papers the heroine found were something that she got from a professor, though I dont remember how or why.

As far as the Norse plot line goes, I think it centered around preventing the frost giants from overthrowing Odin and Thor and their ilk.

I have vague, but possibly wrong feeling that the author was a woman. The last thing I can think of at the moment is I vaguely feel like one of the later books involved the heroine going to the time of Robin Hood.

Not a perfect match, but since nothing has been suggested for a few years, I'll give it a try.

This reminded me of Gael Baudino's Dragonsword. It is the first of a trilogy and was published in 1988. 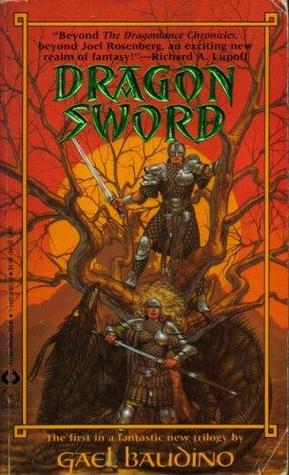 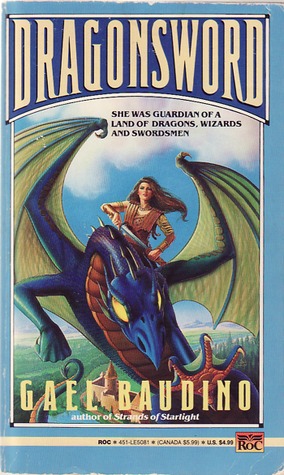 Suzanne Helling has been living a nomadic life since she went through the 1970 Kent State shootings, and she winds up in Los Angeles as a teaching assistant to history professor Solomon Braithwaite. Ten years earlier, his marriage ended, and he tried to kill himself. While comatose from his drug overdose, his unconscious mind took flight and created the land of Gryylth, which he patterned subconsciously on 5th-century Roman Britain, in a corner of the cosmos. Though Gryylth bears a superficial similarity to ancient Britain, there are anachronisms: the inhabitants speak modern English; no one remembers more than ten years back; and Gryylth is an incomplete land—it ends in mist and nothingness in the surrounding ocean.

In this realm, Braithwaite has an alternate persona: Dythragor Dragonmaster, the protector of Gryylth and rider of the dragon Silbakor. There he is tall, strong, and a skilled fighter. In the real world, though, he is an old man with a failing heart. Silbakor has been pressuring him to choose a replacement in anticipation of his eventual death. When Braithwaite proves unwilling to choose, Silbakor chooses Suzanne and transports both of them to Gryylth. There, Suzanne also adopts a new persona: Alouzon Dragonmaster, who, like Dythragor, is tall, strong and skilled with weapons.

A new peril faces Gryylth: the Dremords, invaders from the sea, have taken the Tree of Creation from the Blasted Heath and are planning a new invasion. This tree embodies uncontrolled change and chaos, and in the hands of Tireas, the Dremords' magician, it becomes a potent tool for war. While Dythragor and Alouzon clash on their leadership styles, Alouzon also realizes that Braithwaite's biases have colored Gryylth: the Dremords are unquestioningly feared as enemies; women are little more than chattel unable to bear weapons in their own defense; and magic is feared and distrusted.

7
Help find a novel with a female heroine from, at latest 1990 in a two part novel?
6
Looking for the name of a book about a female scientist who travels back in time and falls in love with a Viking king named Per
11
Young Girl Fantasy Series (I think?)
16
fantasy book/trilogy where magic-using character has swarm of bees as a familiar
3
1980s sci fi book, female main character
12
Medieval fantasy book where an evil sorcerer tried to use magic to make the new weapon, a cannon, explode
7
Book set in a medieval VR world where the main character goes to the physical server to play for a better connection
5
Science fiction trilogy: endless corridors, humor, speeding vehicles, assertive woman