Could the Scotsman's sword harm Aku?

A recurring character and ally of Jack, the Scotsman possesses a sword etched with magic runes that provide it with cutting power and the strength to resist being broken by Jack's blade (their first encounter was rather terse). Like Jack the Scotsman also has a bounty on his head (it was never specifically stated Aku was the one who posted the bounty, but given his status as the show's primary villain, he is the most likely candidate) though whatever crime he might have committed is unclear.

Has it ever been established whether or not Aku could be slain by the Scotsman's blade?

We know very little of the Scotsman from three TV series, except that his blade held its own when he and Jack clashed in their first meeting, and that is has magical runes, which make it similarly powerful to Jack's 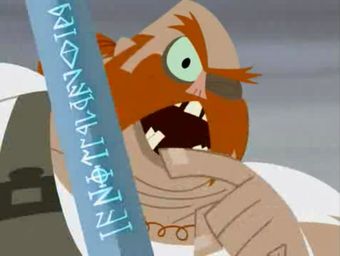 The other point that must be made is that in the show, from what I remember while magic (both items and forces) harms Aku, it is only Jack's sword that appears to cause any damage that can't be regenerated almost instantly.

he can be destroyed by the strength and purity of a human's (and likely any other living creature) spirit, as stated by Vishnu. Jack's katana is virtually the only item which can cause Aku damage that he cannot instantly regenerate from

It's possible the Scotsman's Sword would do the same, viscous temporary damage, but with no long lasting effect. Unless, perhaps, he is also pure of spirit (caveat, I haven't seen the episode with Vishnu, so I don't have specifics about this purity).

So the only reasonable answer is, maybe

Although the Scotsman sword is "magical" and has "magical" rune stones. Jacks sword was made by high skyfathers Odin, Ra,and Vishnu. The Scottsmans sword can boast no such claims. Could it harm Aku? Maybe. Has it? No. Can Jacks sword harm Aku? Yes. Has it? Yes. Based off of feats and displayed info and history: Jacks sword>Scotsman sword.

33
Why is Samurai Jack in the future?
2
Weapon used by one of the Ultra-Robots
4
How did Earth Wind and Fire beat Aku?