How does The Machine handle identical twins?

The Machine's main source of identity seems to be the SSN, and any other identity cards that is linked to the SSN like driving license, company identity cards, etc. It then uses the photo on ID for face recognition.

My question is what happens with identical twins?

Identical twins are not truly identical. Although they possess the same DNA—the same blueprint for development—that does not mean that they developed identically. Differering position in the uterus can lead to differing forces on the monozygotic fetuses, or different hormonal levels. Once born, the babies may further be exposed to differing levels of nutrition or other environmental stimuli that affect the development of facial features.

More than that, in fact: Modern, non-fictional facial recognition technology can distinguish between "identical" monozygotic twins. As indicated in this paper, researchers were able to discriminate between pairs of identical twins, although the precise feature that distinguished them varied from pair to pair. 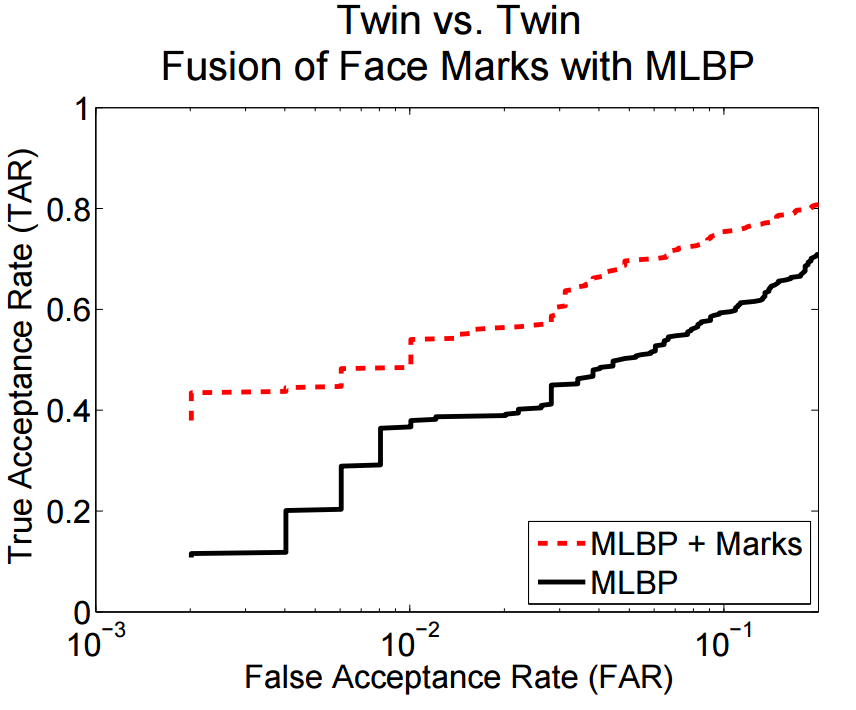 For example, as indicated in the previous graph (taken from the same paper), in the model that the researchers examined, if the likelihood of incorrectly identifying two faces as the same (i.e. confusing one twin for another) is about 1/100, the likelihood of correctly doing so is around 50%. This is substantially worse than the likelihood for non-twins, but still pretty good.

This is all with modern, unsophisticated facial recognition algorithms. A sophisticated AI such as the Machine could outperform the best humans. And humans who are familiar with a person's facial features can far outperform the 50% accuracy given in the cited paper. It is very plausible that the Machine could distinguish between supposedly "identical" twins without any trouble.

Your DMV photos would be ideal. She would likely know the exact type of camera used, the color temperature of the lights installed in the building, and the date to know the ambient conditions (and god knows what else).

The best performance was observed when all images of a pair of identical twins were taken on the same day in the studio environment and the twins had a neutral expression. For this case, the best performing algorithm had a 90% confidence interval for the EER from 0.01 to 0.04.

Performance also showed that gender does not effect performance and that there is an age effect. The results showed that it is easier to distinguish twins over 40 year old than twins under 40.

Abbreviated as EER. A biometric security system predetermines the threshold values for its false acceptance rate and its false rejection rate, and when the rates are equal, the common value is referred to as the equal error rate. The value indicates that the proportion of false acceptances is equal to the proportion of false rejections. The lower the equal error rate value, the higher the accuracy of the biometric system. –webopedia.com

I don't exactly understand how to interpret an EER (as a percentage?) but The Machine would compare pictures taken under the closest matching conditions: with the same expression (ideally, none) and indoor lighting, to reduce the EER as much as possible.

Note that the ERR increases by an order of magnitude when using ambient lighting, as opposed to a studio environment. Whereas a lapse of one year between photos was only a small increase.

Don't forget that this study had a control, in that the same camera was used, but She can probably compensate if it's not. I assume She is quite capable of reverse-engineering what a particular piece of hardware was used from its result, e.g., a photo.

Besides, we're talking about an A.I. that was built to deduce. She probably has an EER of .001 at a 99% confidence interval.

Not the answer you're looking for? Browse other questions tagged person-of-interest or ask your own question.

9
Does The Machine still generate Relevant numbers?
4
Why does the Machine always call Finch on phone boxes?
1
why does The Machine only talks to this person?
4
Why can't The Machine do the same for Finch and Reese as it does for Root?
3
Has The Machine started to recruit people?
1
How does Samaritan not see Root, John, or Finch?
3
Was The Machine ever the perpetrator?