Does Superman clean his uniform?

Does Superman need to clean his uniform? If he does, how does he do it?

It's made of unearthly materials, so I guess cleaning compounds are out of the question.

Superman's super-suit cleaning methods depended on what version of Superman you are talking about.

Golden Age Superman's super suit was literally super, just like he was. In that early incarnation, the material his costume was made out of a material from Krypton and on Earth became as invulnerable as he was. The suit was supposedly woven from the swaddling cloth he was shipped to Earth in. It was indestructible and did not need cleaning. The cape maintained a pocket in which Clark Kent would store his clothing when he became Superman.

Pre-Crisis Superman was so powerful, the joke was that he cleaned his indestructible uniform by flying through the sun. There were even issues where it was mentioned in passing. During the run of Pre-Crisis Superman, his cape was indestructible as well and was used to wrap around and protect people when he would fly them to his fortress of Solitude. The cape was elastic and could be used to contain explosions. It could also be used as a bullet-proof, fireproof and cold-resistant shield to hold in front of someone or a group of people.

Post Crisis Superman was de-powered and his costume and cape were just normal materials. His costume did not get damaged because Superman generated a close-fitting bio-energy forcefield that protected his costume from damage. This did not protect his cape, so Post Crisis superman did not replace his personal costume as often but capes were lost pretty much anytime Superman hit the streets. His body costume could be damaged or made dirty if he was struck with sufficient force or if he was exposed to any energy that could short-circuit his powers (Kyptonite, Q-radiation, magical energies). Some fan fervor during the Post Crisis era eventually had Firestorm create an indestructible suit for Superman.

DCnU Superman comes in two flavors, one wears just a T-shirt with an S shield and jeans and the other (supposedly a later time) wears a close-fitting suit of armor of unknown origin. The cleaning requirements for these outfits will depend entirely on what version of the previous ideas they want to use. They may even create a new idea regarding his suit, especially since I can't figure out why Superman needs armor (besides it looks cool to draw). 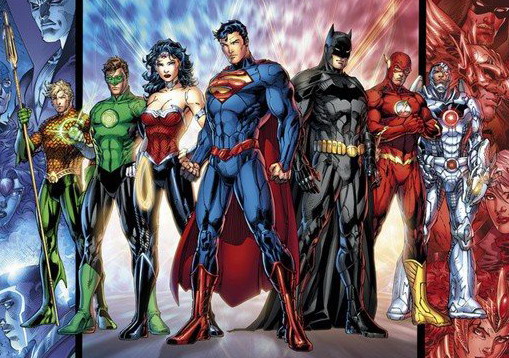 There's no reason to think that Superman's suit can't be cleaned by conventional means. It's been shown to be water permeable, and there's no reason that cleaning agents wouldn't work on it.

Superman has occasionally been said to have an almost-skintight protective field around him that protects his suit (but not his cape), described in detail in the novelization of the Death and Life of Superman story.

For the most part, this protects his suit from dirt and stains, though it weakens when he is in heavy combat (and thus, his suit tears or becomes dirtied).

In short, since his suit is water-permeable, traditional washing methods should clean it effectively. It would, however, take quite a bit of explaining at the laundromat.

Assuming he does, and doesn't use Kryptonian tools.

From The Big Bang Theory:

Sheldon: Superman cleans his uniform by flying into Earth's yellow Sun, which incinerates any contaminant matter and leaves the invulnerable Kryptonian fabric unharmed and daisy fresh.

The The Big Bang Theory reference was a kind of a joke. I also wanted to get more people involved in this question. I'm interested in what you guys think. I'll explain the TBBT reference.

I think that Sheldon is referring to Superman's power being drawn from string theory itself, which we know is not correct since Kryptonians under a yellow sun become a sort of solar battery.

In some series of Superman, he got to close to the sun. His body couldn't handle all that energy and he got mortally sick. His cells started dying. 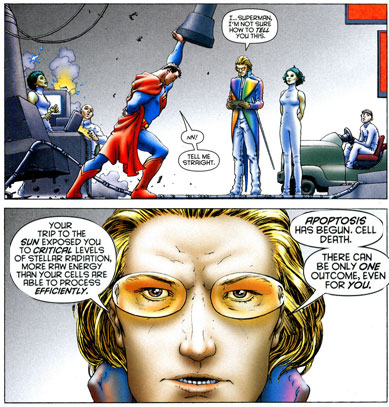 Additionally, if his uniform is of human origin, than he must have a few of them. A uniform of human origin would be damaged pretty often and fast, considering the activities of Superman.

If his uniform is of alien-Kryptonian origin, then it probably wouldn't need cleaning or it would have to be cleaned and mended using some sort of Kryptonian tools. A uniform like this would also virtually be indestructible in the yellow sun.

18
Why does Superman fly headfirst?